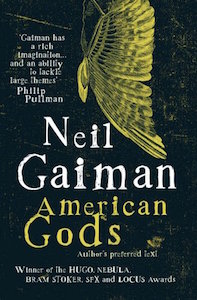 Shadow is released from prison mere days after his beloved wife is killed in an accident. Without much to live for, he accepts a job with an enigmatic Mr. Wednesday, and learns that the past never truly dies.

What The Reviewers Say
Positive Kera Bolonik,
The New York Times
… a noirish sci-fi road trip novel in which the melting pot of the United States extends not merely to mortals but to a motley assortment of disgruntled gods and deities … This might all sound like a bit much. But Gaiman has a deft hand with the mythologies he tinkers with here; even better, he's a fine, droll storyteller.
Read Full Review >>
Positive Laura Miller,
Salon
With its mythological echoes, puns, in jokes and other decodable references, American Gods will delight the sort of reader who likes to hunt for such things … American Gods is a crackerjack suspense yarn with an ending that both surprises and makes perfect sense, as well as many passages of heady, imagistic writing. And for all that he’s missed in the American propensity for religious fanaticism, Gaiman has exactly nailed the way we talk; some of the most savory characters are the minor ones.
Read Full Review >>
Positive Michael Dirda,
The Washington Post
Mystery, satire, sex, horror, poetic prose – American Gods uses all these to keep the reader turning the pages … As this apocalyptic novel progresses, Gaiman balances several different narratives…To keep the story from growing too grandiose, Gaiman throws in a fair amount of humor … On the whole the story accelerates crisply toward its surprise ending.
Read Full Review >>
See All Reviews >>
SIMILAR BOOKS
Fantasy