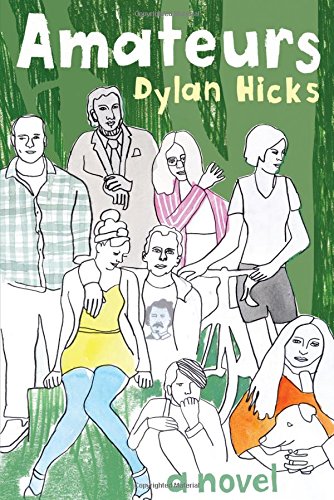 A modern comedy of manners. Archer is a semi-celebrated novelist and sex-toy heir. His best friend, John, is as earnest as Archer is feckless. John’s girlfriend, Sara, envies Archer’s writing career. And Sara’s roommate, Lucas, wishes he’d never lost his girlfriend to the man.

What The Reviewers Say
Rave Michael Schaub,
The Los Angeles Times
You could call the novel meandering, and it is, but in the best possible way ... Hicks does a near-perfect job tracing each character's evolving needs, desires and resentments over the course of seven years ... The themes in Amateurs — friendship, love, envy — could potentially make for a maudlin novel. But Hicks, while undoubtedly a compassionate author, is never sentimental. He writes with a similar measured earnestness that calls to mind the best of Ann Beattie and Anne Tyler.
Read Full Review >>
Positive Tobias Carroll,
The Minneapolis Star Tribune
There’s a lot happening in Amateurs. At times, its density can be foreboding: The pages in which Hicks introduces the cast of characters across two parallel timelines early in the book can be slow going. It’s the sort of novel where trusting in the fact that a payoff will come is essential to reading it. And, in fact, several seemingly minor details, including one character’s obsession with his own annotations of the work of others, tend to pay off by the time the book reaches its conclusion ... The setup of Hicks’ novel is the stuff of classic comic fiction; the minute details and anxieties that surround its characters, however, are what endures.
Read Full Review >>
Pan Courtney Maum,
The New York Times Book Review
That Hicks can write isn’t debatable. What is debatable is what, exactly, he’s trying to say, or whether he even knows. Amateurs seems to open as a classic wedding novel, introducing the title’s cast of directionless M.F.A. grads and chronic underachievers — all of them former or current or future friends — during the lead-up to their buddy Archer Bondarenko’s Winnipeg wedding in July 2011. Jumps in time between 2004-5 and 2011, and a fervent dependence on adverbs, will keep all but the most tenacious reader from grasping that Archer is in fact the planet around which this novel’s convoluted story lines orbit ... If the first half of Amateurs is an arduous exercise in seating arrangements, expounding how the characters know one another, or should, the second half is an indiscernible sendup of Archer as a privileged fleecer in what feels less like a deserved comeuppance than a desperate last attempt at plot.
Read Full Review >>
See All Reviews >>
SIMILAR BOOKS
Fiction

Milk Fed
Melissa Broder
Rave
What did you think of Amateurs?
© LitHub | Privacy