All the Castles Burned 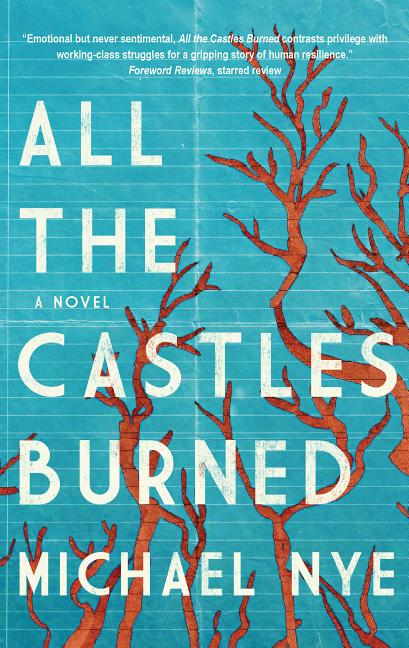 A coming of age novel about Owen, a young man from a troubled, working-class family, who receives a scholarship to a prestigious private academy where he falls under the influence of Carson, an enigmatic upperclassman. When Owen's father is arrested for a shocking and unexpected crime, his family is torn apart, and Owen's anger and fear are carefully manipulated by Carson's mercurial and increasingly dangerous personality.

What The Reviewers Say
Rave Margaret Quamme,
The Columbus Dispatch
[Nye] has a clear sense of the tensions bound up in his males, and of the contained violence always ready to be released through sports or fighting. Precisely detailed descriptions of Owen’s role in several basketball games provide insight into minute changes in his mental and emotional states ... Anger and fear dominate the lives of the characters. The novel plays subtle variations on the theme of dread, which subtly amps up as the story reaches its climax ... a quietly brutal story, anchored in the everyday while hinting at dark paths there for the taking.
Read Full Review >>
Positive Angela Woltman,
Forward Reviews
Emotional but never sentimental, All the Castles Burned contrasts privilege with working-class struggles and examines what it means to be raised by parents who, due to their own wounds, simply cannot be there for their children. A gripping bildungsroman that leaves many intriguing questions about trauma unanswered, All the Castles Burned is a powerful and poignant tale of human resilience.
Read Full Review >>
Positive Dale Singer,
The St. Louis Post-Dispatch
Nye...paints a vivid portrait of Cincinnati in the mid-1990s, using music, video games and popular mall stores like Benetton and Sam Goody to establish a convincing sense of place. The plot unfolds slowly — perhaps too slowly for some readers ... Nye’s writing style is easy to read, with few flourishes, and he often is able to dish up concise descriptions of characters and situations ... All the Castles Burned is the kind of novel that readers will cruise through and be eager for what the author offers next. Stay tuned.
Read Full Review >>
See All Reviews >>
SIMILAR BOOKS
Coming Soon

The Last Karankawas
Kimberly Garza
Rave
What did you think of All the Castles Burned?
© LitHub | Privacy