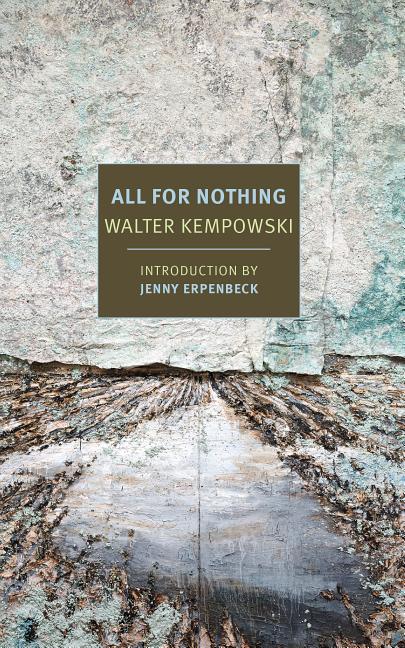 A wealthy family tries--and fails--to seal themselves off from the chaos of post-World War II life surrounding them.
Rave
Based on 7 reviews

What The Reviewers Say
Rave Carol Birch,
The Guardian
The novel builds gradually, dreamily at times, with simple prose and lots of short sections, a quiet undercurrent of growing unease getting steadily stronger, always ignored, put aside till tomorrow ... Kempowski uses detail like a repeating phrase in music, and there is a musical quality also in the movement of the book as a whole, from its quiet beginning through the relentless build to its massively impressive climax. The repetition is skilfully fed into the narrative to create a gradual deepening of tone ... All for Nothing is a beautiful, forgiving and compassionate book that looks beyond the futile divisions people make between themselves. It reaches its last devastating line with poetic sensibility and the grace of a classical tragedy, confirming Kempowski as a truly great writer.
Read Full Review >>
Rave Corinna da Fonseca-Wollheim,
The New York Times
This novel, now published in a crystalline translation by Anthea Bell, examines with melancholic detachment the members of a still-privileged household in a small East Prussian town as they wrestle with a crucial decision: whether to stay or go ... But All for Nothing isn’t easily appropriated by any ideology. Kempowski’s sympathy for the suffering of his characters and his acknowledgment of the attendant destruction of their civilization are diffused by a fine-grained ambivalence ... In All for Nothing, that chorus is shrunk to a chamber motet that is finely blended yet only bitterly poignant, making the novel’s bloodied and epic finale feel insufficiently supported. The assembly of found texts is apt for establishing the period setting and marking the disintegration of German culture, not for the creation of characters with much depth. Still, as a literary response to a long-buried collective trauma, All for Nothing is well worth reading, especially now that the country’s parliament contains delegates from the far-right Alternative for Germany party with deep ties to groups who were expelled from East Prussia.
Read Full Review >>
Rave James Wood,
The New Yorker
Kempowski gives us a hundred pages of this steady pressure-building—delicately achieved, with a constantly flickering humor—until the barometer breaks ... Kempowski’s handling of this episode displays all his deep talents as a novelist—his impartial hospitality to many different perspectives, his shrewd comprehension of his characters’ solipsism, the impurity of their heroism ... Kempowski’s ironic control braces the novel against melodrama. And it gives the author a slight distance from his characters, so that he is not aligned too sympathetically with them. Most of them, with the exception of the brave and kindly Peter (the novelist’s self-portrait), are morally mottled, not entirely heroic but not wholly wicked, either ... A little less than a decade later, but too late for poor Sebald, Walter Kempowski beautifully proved him wrong.
Read Full Review >>
See All Reviews >>
SIMILAR BOOKS
Fiction

Each of Us Killers
Jenny Bhatt
Rave
What did you think of All for Nothing?
© LitHub | Privacy