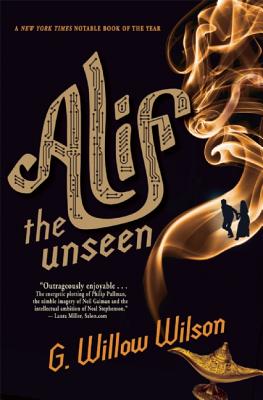 When the young Arab-Indian hacker Alif discovers The Thousand and One Days, the secret book of the jinn, Alif must struggle for life or death, aided by forces seen and unseen.

What The Reviewers Say
Rave Pauls Toutonghi,
The New York Times Sunday Book Review
Secret identities form the axis of Wilson’s fast-paced, imaginative first novel, Alif the Unseen — a book that defies easy categorization. Is it literary fiction? A fantasy novel? A dystopian techno-thriller? An exemplar of Islamic mysticism, with ties to the work of the Sufi poets? Wilson seems to delight in establishing, then confounding, any expectations readers may have … For all its playfulness, Alif the Unseen is also at times unexpectedly moving, especially as it detours into questions of faith … For those who view American fiction as provincial, or dominated by competent but safe work, Wilson’s novel offers a resounding, heterodox alternative.
Read Full Review >>
Rave Janet Maslin,
The New York Times
[Wilson] spins her insights into an exuberant fable that has thrills, chills and — even more remarkably — universal appeal … Alif the Unseen will eventually travel deep into the genies’ world when it gets to the Empty Quarter of the city where Alif and Dina live. And the genies, like everything else that makes Alif the Unseen so appealing, are nothing like what the reader would expect … Ms. Wilson fills Alif the Unseen with an array of observations about contemporary culture: new questions of theology (if a sin is committed in virtual reality, is it still a sin?); fantasy literature and, most conspicuously, Western culture.
Read Full Review >>
Rave Elizabeth Hand,
The Washington Post
Wilson has said that her novel grew out of a ‘wonderfully clarifying kind of rage,’ fed by her frustration with the failure of many Americans, including some in the publishing industry, to grasp the significance of social media as a medium for social change, especially in the Middle East. Yet she is far too canny a writer to let earnest or angry didactics hijack her tale. Instead, she seduces readers with a narrative that integrates the all-too-familiar terrors of contemporary political repression with supernatural figures from The Thousand and One Nights: jinn, marids, sila, demons … Alif the Unseen confronts some of the most pressing concerns of our young century, but it’s also hugely entertaining. Wilson has a Dickensian gift for summoning a city and peopling it with memorable characters, and she doesn’t shy away from showing us the terrible price Alif pays, first for his ignorance, then for his courage.
Read Full Review >>
See All Reviews >>
SIMILAR BOOKS
Fantasy

40
Alan Heathcock
Positive
What did you think of Alif the Unseen?
© LitHub | Privacy