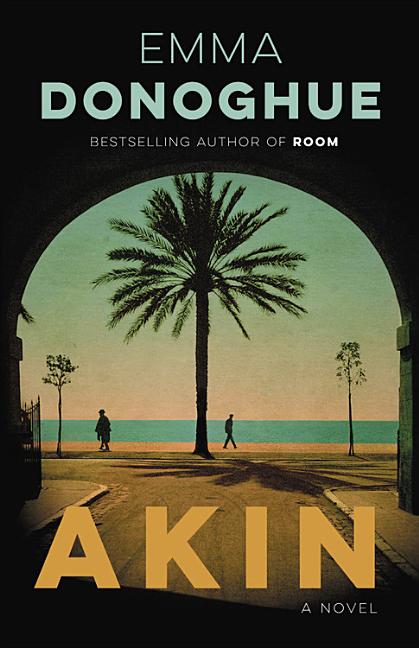 In the latest from the author of Room, a retired New York professor named Noah has his life thrown into chaos when he becomes caretaker to his young great-nephew, Michael. When the two travel to the French Riviera in hopes of learning more about their family history, mysteries develop surrounding Noah's mother's wartime secrets and the death of Michael's father.

What The Reviewers Say
Rave Helena Mulkerns,
The Irish Times (IRELAND)
As the rather well-weaved plot gathers momentum, it juxtaposes two family mysteries ... there is no soppy exposition of love between the old man and the boy at the end of the book, and the relationship’s development is subtle enough for us to accept that a partnership of sorts has formed. The extended generational plots that develop through the novel are complex and deeply moving, exploring how our family histories often affect the fates of unfolding generations. Akin sparkles with Donoghue’s clear, often witty style ... Donoghue’s crafted combination of historical context and current social issues make her book compelling and important, as well as delivering a well-paced and intelligent read.
Read Full Review >>
Rave Sarah Laing,
The Globe and Mail (CAN)
A quietly delightful read, perfectly calibrated for deep enjoyment. It has none of the high-stakes drama of the Man Booker Prize-shortlisted Room or the magical gimmickry of The Wonder, but Akin will satisfy Donoghue-ites just as much as her previous best-sellers. It succeeds, you see, because it just does so many things right, a melody that’s pleasing simply because there are no off notes. Donoghue, who lived there for two years, captures Nice during Carnival vividly, detail after detail painting a portrait so real the combined smells of urine and socca seem to waft off the pages. There are insertions—of everything from knock-knock jokes to heartbreaking fragments of history and genuinely interesting science facts—that work harder to pull you into this world than any amount of edge-of-your-seat plotting. Her portrayal of an 11-year-old in particular is almost note perfect ... Crucially, Donoghue crafts a believable bond between Noah and Michael. They’re an odd couple, sure, separated by generation, class and an ability to comprehend selfies, but this funny pair grow genuinely fond of each other. Just as I think you will of them.
Read Full Review >>
Positive Megan O’Grady,
The New York Times Book Review
Donoghue nails not only the class differences but the generational impasse: the adult who cannot grasp the extent to which society has broken; the child who has never known it to be otherwise ... And so it’s unfortunate that Michael seems less like a real person than a collection of attitudes, even after his sharp eye and technical savvy prove useful in helping Noah probe the mystery of a cache of 1940s-era photos Noah found among his late mother’s possessions ... As this historical subplot gains momentum, the past becomes more compelling than Noah’s present-day relationship with Michael, which somehow lacks an emotional charge ... What begins as a larky story of unlikely male bonding turns into an off-center but far richer novel about the unheralded, imperfect heroism of two women — Michael’s incarcerated mother and Noah’s long deceased one — and the way we preserve the past and prepare for the future.
Read Full Review >>
See All Reviews >>
SIMILAR BOOKS
Fiction

Theatre of Marvels
Lianne Dillsworth
Positive
What did you think of Akin?
© LitHub | Privacy