Ahab's Return: or, The Last Voyage 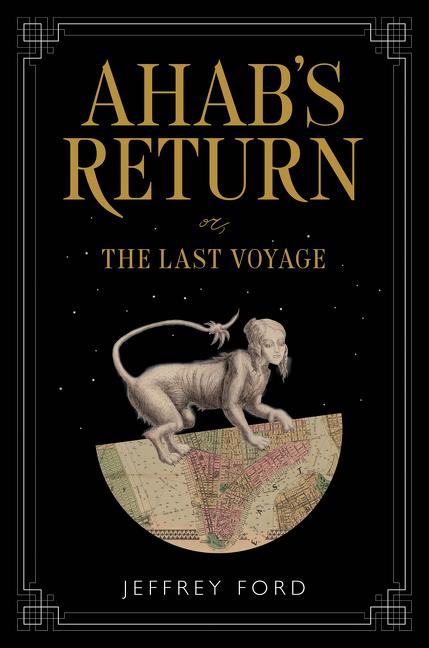 A fabulist re-telling of Herman Melville's Moby Dick. At the end of a long journey, Captain Ahab returns to the mainland to confront his former shipmate, Ishmael. For Ahab was not pulled into the ocean’s depths by a harpoon line, and the greatly exaggerated rumors of his untimely death have caused him grievous harm—after hearing about Ahab’s demise, his wife and child left Nantucket for New York, and now Ahab is on a desperate quest to find them.

What The Reviewers Say
Positive David Raney,
Washington Independent Review of Books
Ford knows how to tell a story, whatever the genre, and how to get out of its way and when to stop, and here that makes for a great few hours between the covers ... This is a New York you can see and smell, and you’ll encounter not just George and Ahab but vicious street gangs, coach chases, mysterious knife-throwing ladies, ambushes, opium lords, a loathsome — possibly inhuman — adversary known as the Pale King Toad, ghost ships, zombie assassins, and something called the manticore, about which the less said (and dreamt) the better. There is a subtle emphasis here on how stories get written and why — not with postmodern purpose but to ask why they matter to us, and why fact and fable so often share the same book or body ... Sign on for this one; it’s well worth the trip.
Read Full Review >>
Positive Gary K. Wolfe,
Locus
...the novel is generally less redolent of Moby-Dick than of Melville in his weirdly Gothic mode in novels like Pierre; or The Ambiguities or stories like 'Bartleby, the Scrivener'. Bartleby even shows up briefly, only now his recalcitrant passivity has been transformed into full zombie mode ... The new characters that Ford introduces are more recognizably products of the dark, gritty urban underground of pre-Civil War New York ... As effective as Ahab’s Return is as a fast-paced and efficient thriller, it’s also a sharply critical fiction, raising issues of addiction, home­lessness, and demagoguery, with the metaphysical whiteness of Melville’s whale replaced by the more toxic whiteness of 'Me First' and 'a quest for the reclamation of white Protestant superior­ity.' Manticores and gangsters might make for hazardous adventures in a steampunk past, but the actual horrors have never really gone away.
Read Full Review >>
Positive Publishers Weekly
...[an] unusual and gripping novel ... Fans of successful reimaginings of literary classics such as Louis Bayard’s Mr. Timothy, about a grown-up Tiny Tim, will be entertained.
Read Full Review >>
See All Reviews >>
SIMILAR BOOKS
Coming Soon

The Last Karankawas
Kimberly Garza
Rave
What did you think of Ahab's Return: or, The Last Voyage?
© LitHub | Privacy