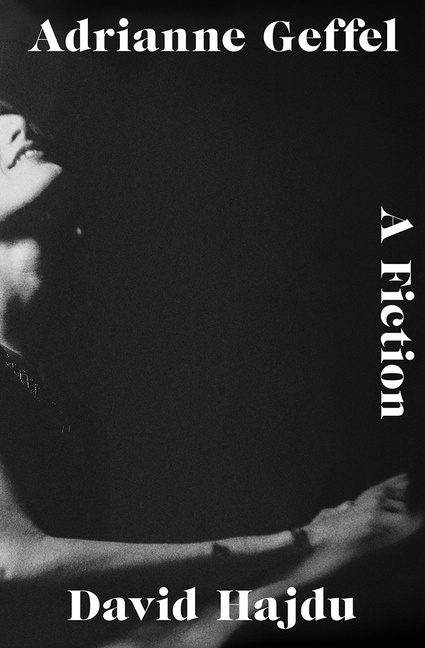 An oral history of a (fictitious) musical phenomenon.

What The Reviewers Say
Rave John Young,
The Pittsburg Post-Gazette
Finally, Adrianne Geffel comes to life in David Hajdu’s oral history biography of the avant-garde pianist and composer ... t turns parodic and satiric, Adrianne Geffel: A Fiction works because it shares such a believable story. Even if the title character is meant to remain a bit of an enigma, her clueless mother, childhood piano teacher, Juilliard professors, doctors, record label representative, reviewers, friends and quasi-manager often feel all too real as they recount their often-pumped-up roles in Geffel’s life. While clearly meant to be humorous, the story spins in such interesting directions that it feels unfair to reveal too much of it. Suffice to say that musician biography tropes get gloriously twisted in this seemingly traditional tale of the sensitive, put-upon artist ... Fans of the genre, as well as musicians, will probably enjoy Mr. Hajdu’s humor most ... Geffel’s friends Barbara Lucher and Ann Athema offset Zervakis’ smarminess nicely. While the satiric nature of certain characters keeps them at arm's length, Lucher and Athema elicit laughs while remaining more realistic and likable ... Mr. Hajdu’s book makes jokes both heady and base. They all work to remind us that music and art matter, but the process that brings them to the public’s attention is often as capricious and cruel as that of any other business. Also, the greater the talent and originality of an artist, the more the conformists will try to restrain them and the unscrupulous will pounce and take advantage. That Mr. Hajdu delivers such bleak views so wittily helps make some sad truths feel satisfying. Plus, an ambiguous conclusion leaves readers to decide just how 'geffelesque' Adrianne’s ultimate fate proves to be.
Read Full Review >>
Positive Taylor Poulos,
Guernica
Hajdu, himself a reviewer of music, movie, comics, and culture at large, brings a kind of comic book sensibility to his first novel, which resembles a music biography. Though relatively short, the book is heavy on illustrative details and quirky pulp sensibility. Unfolding from the perspective of a faceless oral historian interviewing a series of subjects, the point of view is disciplined in a way that recalls a comic book penciler’s control over a panel’s field of view ... These critics believe that [Adrianne's] music, a mirror of her emotions, is only good when she is struggling. Though she is far from the first artist to wrestle with fame, Adrianne’s distinctive musical abilities, and the emotional transparency of her music, make these tensions uniquely visible. Hajdu’s book can be read as the story of a critic grappling with the destructive forces at play within his own field.
Read Full Review >>
Mixed Clea Simon,
The Boston Globe
Although this novel is a purported oral history of the title character, a mysterious avant-garde musician, hers is the one voice we never hear. Instead, as we seemingly learn about this fictional pianist-composer we are treated to a revealing — and at times hilarious — satire of the music business, fame, and the cult of personality ... Much of the humor in this short comic novel is broad ... Inside jokes abound, particularly in the testimony of experts who can supposedly offer insight into Geffel or her exceedingly odd compositions, which apparently emanate directly from her emotions ... Other jokes are a little more welcoming to a wider readership ... At times the humor wears thin. The one-note recitals, particularly by the hypercerebral musicologist and self-important critic, become repetitive, even in this relatively short work. By the time Hajdu wields the critical doubletalk to tackle another issue — whether if great art can be created by someone who is happy — it is too little too late. A perennial debate among critics and fans of a certain sort, this question is left largely unresolved, though Hajdu does use it to hint at Geffel’s fate. What we learn, instead, is how all of us view each other as extensions of ourselves, for our own dreams and purposes, and, ultimately, how mysterious art and the act of creation really are.
Read Full Review >>
See All Reviews >>
SIMILAR BOOKS
Fantasy

Win Me Something
Kyle Lucia Wu
Rave
What did you think of Adrianne Geffel: A Fiction?
© LitHub | Privacy