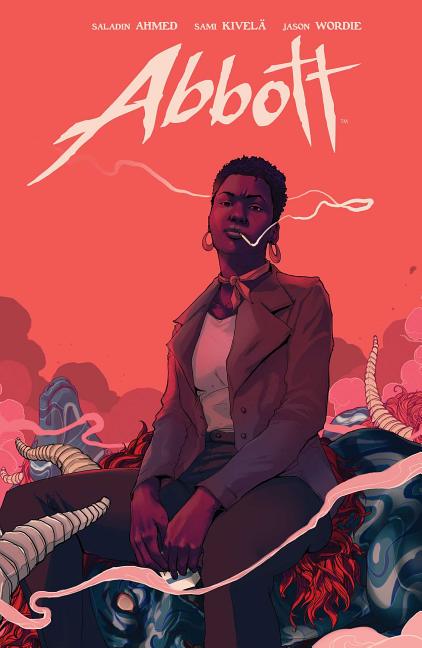 The Hugo Award-nominated novelist and author of Black Bolt presents the search of one woman—a hard-nosed reporter in 1970s Detroit—for the supernatural truth about the city's political corruption and its contribution to the destruction of her family.

What The Reviewers Say
Rave Will Nevin,
The Oregonian
The best thing about Abbott...is that its lead character...feels like a fully-developed, lived-in character from the first pages of her debut miniseries ... When you have a character that good, that strong, that alive (so much so that I googled to make sure this wasn't an adaptation), the rest is just gravy ... This is one hell of a debut ... The art backs it up all the way, with Wordie's colors lending the book an additional broken-in sort of feel. This is so good on so many levels.
Read Full Review >>
Positive JJ Amaworo Wilson,
New York Journal of Books
The dialogue is snappy but flawed...[with] all the clichés of the genre ... But the story moves fast and Sami Kivelä's illustrations are as gorgeous and stylish as ever ... The illustrations and lettering are formally inventive, too ... Abbott is enormously enjoyable. The occult plot is a touch hokey, but Elena makes the journey worthwhile. Her story is one long fight. Racism, the patriarchy, dumb bosses, supernatural forces. She handles it all, cigarette dangling, not a hair out of place.
Read Full Review >>
Rave Sarah Hunter,
Booklist
Kivelä beautifully renders the story in dynamic page layouts and compellingly fluid panel borders, filling the backgrounds with recognizable Detroit architecture, sharp and expressive characters, and grotesque body horror perfectly suited to the noir-tinged supernatural mystery. Jason Wordie’s electric colors, particularly the garish purple and curly black shadows emanating from anything otherworldly, give stunning depth to the art. And amid Abbott’s investigation into the paranormal occurrences, Ahmed weaves cutting commentary about racism, microaggressions, and gentrification, while snippets of Abbott’s articles scattered throughout the pages provide evocative context for the political, cultural, and economic realities of Detroit in the ’70s. Smart writing, gorgeous artwork, and a vibrant hero with captivating depth make this a series to watch.
Read Full Review >>
See All Reviews >>
What did you think of Abbott?
© LitHub | Privacy