A Tale for the Time Being 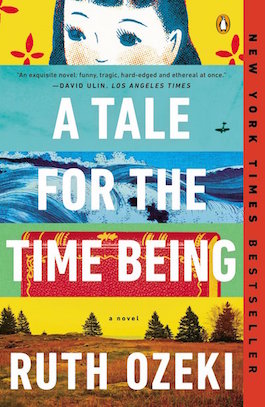 A Tale for the Time Being, Ruth Ozeki’s third novel, brings together a Japanese girl’s diary and a transplanted American novelist to meditate on everything from bullying to the nature of conscience and the meaning of life.

What The Reviewers Say
Rave David L. Ulin,
The Los Angeles Times
Ruth Ozeki opens her third novel, A Tale for the Time Being, with a small deception — or, more accurately, a sleight of hand. Forgoing context or explanation, she plunges us into the diary of a 16-year-old Japanese girl named Nao ...such an exquisite novel: funny, tragic, hard-edged and ethereal at once ...constructed around a pair of interlocking narratives — Nao's diary, which is really more of an extended suicide note, and the story of Ruth, a novelist who lives on Vancouver Island and one day finds washed up on the beach a package containing the diary and other artifacts ... Both Nao and Ruth are faced with complex puzzles: for the former, the question of her own existence, and for the latter, a memoir of her late mother's descent into Alzheimer's... Both are trapped by old ways of thinking, old ways of seeing, by the weight of their respective pasts.
Read Full Review >>
Positive Lisa Schwarzbaum,
The New York Times Book Review
...in A Tale for the Time Being is a 16-year-old Japanese girl named Nao who never makes an appearance in the flesh. Nao’s lively voice, by turns breezy, petulant, funny, sad and teenage-girl wise, reaches the reader in the pages of her diary, which, as Ruth Ozeki begins to fold and pleat her intricate parable of a novel...lucky for Ruth, the diary’s mysteries are a gift for any storyteller, even more so for one feeling stuck about her next project. Each page sends Ruth scurrying in pursuit of clues about the girl’s existence... This is a book that does not give up its multiple meanings easily, gently but insistently instructing the reader to progress slowly in order to contemplate the porous membrane that separates fact from fiction, self from circumstance, past from present.
Read Full Review >>
Rave Wendy Smith,
The Washington Post
From the first page of A Tale for the Time Being, Ozeki plunges us into a tantalizing narration that brandishes mysteries to be solved and ideas to be explored ... Ozeki masterfully develops the two parallel stories, creating a virtual dialogue between the blocked writer and the diarist...plenty of Japanese pop culture, juicily but scathingly portrayed as exploitative of vulnerable young women and a tool in the enforcement of conformism ... She finishes off her dazzling tapestry of metaphor and meaning with a short, tender letter from Ruth to Nao. This erudite ­author knows that in the end, the most important truths are simple.
Read Full Review >>
See All Reviews >>
SIMILAR BOOKS
Coming Soon

Fellowship Point
Alice Elliott Dark
Rave
What did you think of A Tale for the Time Being?
© LitHub | Privacy