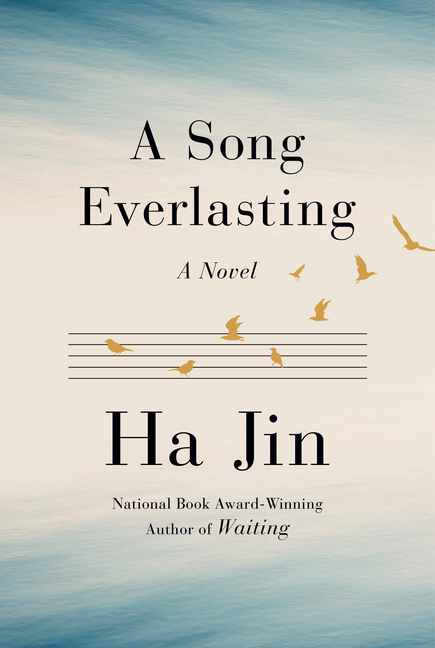 The National Book Award-winning writer returns with the story of Yao Tian, a Chinese singer who finds himself stuck in New York after traveling to perform a gig there he later learns has been linked to Taiwan's secession movement, incurring the Chinese government's wrath and revocation of his passport. Tian tries and tries to return home, all the while eking out an existence in the United States.

What The Reviewers Say
Rave Priscilla Gillman,
The Boston Globe
Ha Jin...writes novels defined by profound thoughtfulness and quiet, unshowy grace. His unadorned prose; cool, hypnotic style; and nuanced, compassionate portraits of characters seeking freedom and fulfillment while running up against bureaucratic, political, and personal obstacles have won him a deservedly admiring readership. His latest novel, A Song Everlasting marshals many of these winning features in the service of a deeply moving portrait of an artist as an immigrant in a new land ... a little long—some details seem extraneous or distracting and there are unnecessary repetitions—but by novel’s end, we are deeply bonded to its protagonist, who emerges from one setback, trauma, and blow after another with his dignity, idealism, and essential goodness intact. The quiet heroism of his life, his commitment to growth and art, his emergence into the experience of ordinary contentment are impressive and touching.
Read Full Review >>
Pan Jane Hu,
The New York Times Book Review
... a morally implausible, if not confused, novel ... reveals the difficulty of refracting recent Chinese history through fictions about lone individuals ... Over the course of A Song Everlasting, I kept expecting Tian’s life to finally fall apart, laying bare the impossibility of telling Chinese narratives of progress in an era of historical amnesia. Things go perilously from bad to worse for Tian, each turn prompted by an impulsive decision or event more random than the last. The novel’s genre flickers in and out of focus accordingly. At times, the specificity in which Jin details China’s online surveillance apparatus renders the novel aggressively realist. The bulk of A Song Everlasting, however, might best be read as naturalist fiction, in which characters are reduced to cogs in the machinery of capitalism, moving, as Lily Bart does in The House of Mirth, into smaller and dingier rooms until they die. Such a novel would refuse to indulge in Chinese mass trauma with Chinese individual heroism. Ultimately, though, Jin can’t resist the temptation ... One wonders how a character with as much long-game integrity as Tian ever sang for the Chinese state in the first place, much less take the side gig, only to defect for life. In his latest novel, Jin seems finally to have lost the plot.
Read Full Review >>
Positive Joan Acocella,
The New Yorker
A Song Everlasting...is ultimately a more balanced and accomplished novel than [Jin's] A Free Life, in part because there are many escape valves that allow bitterness to flow away from the main line of the narrative ... when, in describing Tian’s circumstances, Jin falls back on a cliché—for example, having characters discuss freedom against a backdrop of birds in flight, like Tony Soprano gazing at the ducks in his swimming pool—he does not recoil from the sentimental formula ... Sorrows, too, are softened ... The note of mild contentment, of making do with second best—we find Tian, on the book’s last page, drinking a non-alcoholic beer—may seem disappointingly emollient to fans of Waiting and War Trash, but the acid bath couldn’t go on forever, and in the lives of most immigrants it probably doesn’t.
Read Full Review >>
See All Reviews >>
SIMILAR BOOKS
Fiction

All the Broken Places
John Boyne
Mixed
What did you think of A Song Everlasting?
© LitHub | Privacy