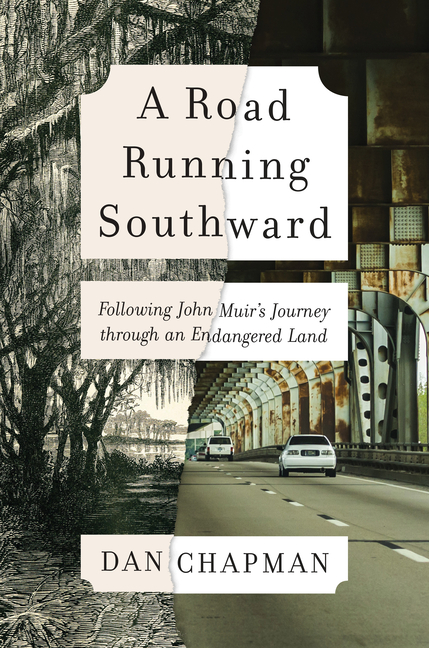 In 1867, John Muir set out on foot to explore the botanical wonders of the South, from Kentucky to Florida. One hundred and fifty years later, veteran Atlanta reporter Dan Chapman recreated Muir's journey to see for himself how nature has fared since Muir's time. He uses humor, keen observation, and a deep love of place to celebrate the South's natural riches. But he laments the long-simmering struggles over misused resources and seeks to discover how Southerners might balance surging population growth with protecting the natural beauty Muir found so special.

What The Reviewers Say
Positive Lori Sinderlind,
New York Times Book Review
Dan Chapman retraces the ecologist John Muir’s thousand-mile walk through the Reconstruction-era South, and what he finds there today is alarming ... It is Chapman’s mission not only to stand in Muir’s shoes to see what he saw, but to view Muir’s world through a 21st-century lens ... It is difficult to look at ... One of the curious revelations of these books as a whole is the apparent frequency with which men sleep outside without permission ... Humans have done grievous harm to the earth in the past 150 years; it is exhausting at times to look at what we’ve done.
Read Full Review >>
Positive Christopher Irmscher,
Wall Street Journal
Alternating between jeremiad and dark satire, Mr. Chapman, a seasoned environmental journalist from Georgia, thinks that we have lived precisely the way Muir admonished us we shouldn’t—namely, as if the world were made for humans. While Mr. Chapman isn’t loath to name his villains, he is more interested in the good guys ... Walking, for Mr. Chapman, is a form of activism as well as personal penance, a way of making himself see, and feel, the drastic changes in a lacerated landscape he still loves. There are, to be sure, moments of delight even for him, which seem magical because they are so rare.
Read Full Review >>
Rave Candace Dyer,
Atlanta Journal-Constitution
How would Muir react to our contemporary landscape? 'He would cry in his beer today,' writes Chapman. However, Muir likely would nod his approval at the work of his acolyte ... [Chapman] has produced an engaging hybrid — part lyrical travelogue, part investigative journalism and part jeremiad, all shot through with droll humor ... Between these two note-scribbling wanderers, it is hard to tell who is more enraptured by the outdoors, but Chapman is the bigger wiseacre. He takes an immersive, sometimes mischievous approach ... Like a good reporter, Chapman has done his homework, reading all of the dry scientific journals and surveys, connecting the dots, and distilling them into accessible observations and larger truths ... A Road Running Southward offers no pat prescription to fix these problems overnight, but it reminds us of all that we have, and it sounds a powerful, resonant alarm.
Read Full Review >>
See All Reviews >>
What did you think of A Road Running Southward: Following John Muir's Journey Through an Endangered Land?
© LitHub | Privacy