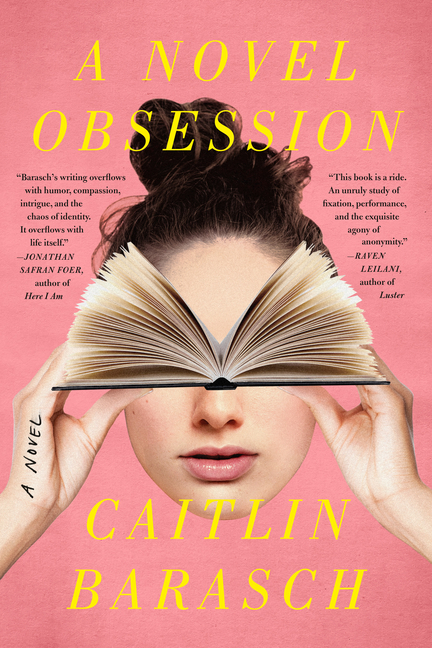 Twenty-four-year-old New York bookseller Naomi Ackerman is desperate to write a novel, but struggles to find a story to tell. When, after countless disastrous dates, she meets Caleb—a perfectly nice guy with a Welsh accent and a unique patience for all her quirks—she thinks she's finally stumbled onto a time-honored subject: love. Then Caleb's ex-girlfriend, Rosemary, enters the scene.

What The Reviewers Say
Positive DONNA EDWARDS,
The Associated Press
Barasch has created a nesting doll of a novel: It’s a fictional story of a writer writing a fictional story — in which she sometimes has to write a fake version of her novel — written by a real fiction writer whose life bears many striking resemblances to the real-life novel ... unsettling, but surely that’s what a reader wants when they pick up a novel about a woman stalking her boyfriend’s ex. Barasch has a talent for balancing discomfort and empathy, pushing the reader away and pulling them right back. It’s hard to confidently enjoy a book when it feels like doing so enables unhinged behavior for the sake of art and entertainment, but the characters are emotionally engaging, beckoning you to rubberneck the inevitable train wreck ... Splendidly rich descriptions and unexplored queer undertones create unrequited anticipation throughout the novel. Like Naomi, I wondered, 'Where can you possibly go from here to have a satisfying ending?' The novel’s vague hint at resolution answers, 'You don’t.'
Read Full Review >>
Rave Kristine Huntley,
Booklist
Barasch peels back the layers of Naomi’s obsessive behavior and apparent emotional detachment to reveal a deeply damaged but utterly compelling young woman. Readers may cringe as Naomi crosses boundaries, but they won’t be able to look away. Barasch’s suspenseful puzzle-box tale should appeal to readers of the You series by Caroline Kepnes.
Read Full Review >>
Rave Kirkus
... stylish, energetic ... At once a compassionate portrait of someone so desperate for intimacy that she can’t help but sabotage it and an incisive study of female friendship at its most toxic and proprietary, this dread-laden psychological thriller is smart, jarring, and funny. Its imperfections—occasionally clumsy dialogue and a climax that lacks much of the force of the buildup—distract from but don’t quite diminish the bewitching effect of the narrator. Naomi, as a character, is electric; her sinister fixation is as unsettling as it is contagious ... Propulsive storytelling and an irresistible narrator from a sharp new writer.
Read Full Review >>
See All Reviews >>
SIMILAR BOOKS
Coming Soon

Fellowship Point
Alice Elliott Dark
Rave
What did you think of A Novel Obsession?
© LitHub | Privacy