A Matter of Taste: A Farmers' Market Devotee's Semi-Reluctant Argument for Inviting Scientific Innovation to the Dinner Table 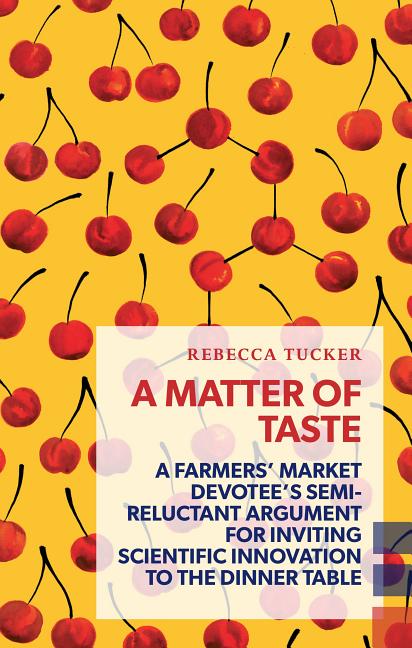 A Toronto-based writer, editor, and journalist offers a critique of the farmer's markets and organic produce that have become synonymous with "good food"—to the problematic exclusion of other kinds of food movements.
Positive
Based on 3 reviews

What The Reviewers Say
Rave Christine Sismondo,
Toronto Star
Every once in a while, a food book comes along that manages to cut through a lot of the nonsense and clear a path to a more productive conversation about how and what we eat. In this case, that book is Rebecca Tucker’s A Matter of Taste: A Farmers’ Market Devotee’s Semi-Reluctant Argument for Inviting Scientific Innovation to the Dinner Table. It’s a slim volume but makes a solid case for putting an end to magical thinking when debating the future of food ... Food, of course, is not the only pressing current issue stalled by an anti-modern backlash that’s led to polarization. The only way out, though, is by continuing to make thorough, well-informed, even-handed arguments for moderation and meeting in the middle—exactly like the ones Tucker has made. May we have more books like this one. Because we’re going to need ‘em—and not just for food, about pretty much everything.
Read Full Review >>
Mixed Zan Romanoff,
Modern Farmer
The book centers on a nuanced idea, but that idea is done a disservice by the briefness of the volume. There are plenty of provocative statements, but not quite enough room to flesh out a convincing argument for them. This is particularly frustrating, because Tucker’s thesis—that the sustainable food movement needs to get comfortable with technology invented after the 1920’s if it’s going to feed the world—is as important and interesting as it is complicated and controversial. For many who’ve been turned off by the puritanism of the food movement and its focus on ethics over economics, this book provides a welcome dose of real-talk rooted in practical and empathetic thinking ... While her points are well taken, she fails to reckon with some of farmers’ objections to the corporatization of their work, which can hinge on intellectual property, ownership and capitalism itself than anti-scientific bias ... Tucker acknowledges that farmers might have legitimate concerns about the security of the data harvested by these technologies, but by and large, she dismisses those who reject precision farming’s possibilities as 'purists': people who see smart and automatically think bad ... Do these objections outweigh the imperative to figure out how to feed those who are hungry? It’s an interesting question; it would be interesting to see Tucker wrestle with it, but, unfortunately, that’s not in A Matter of Taste’s purview ... It’s a fascinating look at some up-and-coming technologies, but not a comprehensive argument for them—interesting if you go into it on Tucker’s team, but not likely to convince you if you don’t already agree with her views.
Read Full Review >>
Positive Mark Knoblauch,
Booklist
Canadian Tucker has thoroughly digested the writings of Michael Pollan and Mark Bittman and finds them unsatisfying ... This social and culinary manifesto of sorts provides much food for thought.
Read Full Review >>
See All Reviews >>
What did you think of A Matter of Taste: A Farmers' Market Devotee's Semi-Reluctant Argument for Inviting Scientific Innovation to the Dinner Table?
© LitHub | Privacy