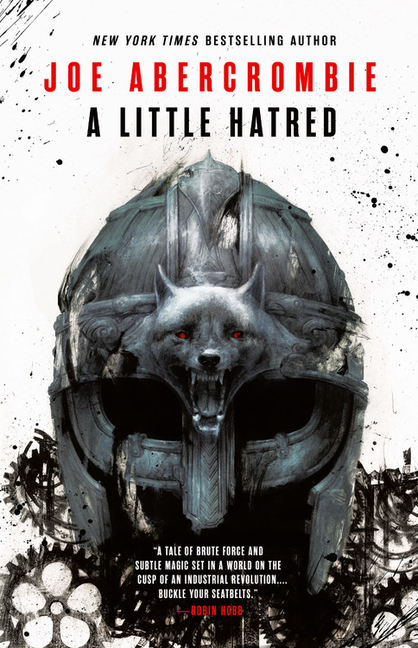 From New York Times-bestselling author Abercrombie comes the first book in a new fantasy trilogy where the age of the machine dawns, but the age of magic refuses to die.

What The Reviewers Say
Rave Erik Kain,
Forbes
... reminded me that Abercrombie is one of the most brilliant voices in fantasy right now, putting out consistently excellent fiction with each release ... Abercrombie, who has always been sharp when it comes to weaving politics into his fantasy without making them heavy-handed, manages to do so again, though his commentary this time around is perhaps even more salient ... Questions of immigration, sexuality and economics all weave effortlessly through the text. There is nothing preachy or heavy-handed here, but plenty to make you think ... Abercrombie’s prose is as readable and engaging as ever. The world he crafts is an ever-moving chessboard, and all its pieces are constantly in motion ... Abercrombie’s writing is at once economical and evocative. His world feels just as real now as ever ... one of the best fantasy novels I’ve read in years. There is nobody quite like Abercrombie in this genre. Perhaps Martin, though I’ll admit: I think I like Abercrombie better ... Every fight scene is painfully brutal, but not just for the blood and gore, but the way you feel the characters’ exhaustion and fear. It’s palpable. War and violence aren’t glorified here at all ... Memorable, relatable, frustrating characters. A world poised on the brink–of new technology, new revolutions, new threats from north and south, and old ideas doing their very best to maintain the status quo. I honestly have no idea where this story is headed, but I love that we’re heading there ... Say one thing for Joe Abercrombie, say that he’s a master of his craft.
Read Full Review >>
Rave Krista Hutley,
Booklist
Abercrombie unerringly juggles a large cast of multifaceted, morally ambiguous characters, each embroiled in their own complicated story; each suffers a crushing blow to their sense of self, their relationships, or their worldview. Taken together, this unflinching depiction of human nature becomes slow-motion tragedy on a grand scale, shot through with moments of humor, excitement, and hope. For Abercrombie fans, there are nods to his First Law series, but this first volume in a new trilogy is an excellent starting point for new readers.
Read Full Review >>
Positive Jared Shurin,
Tor.com
It is, accordingly, a rambunctious teenager of a book: violent and hormonal, argumentative and gratuitous. It is rapid-fire; short chapters, cliff-hangers, constant action and quip-laden dialogue. Characters are established, tested, undermined and judged at pace. The sex is explicit, the violence more so ... a book that could not exist without its antecedents, but spends every page trying to undermine them. It rebels against rebellion, without becoming conventional; it is a coming-of-age tale that deliberately eschews maturity and wisdom. It owes as much to the storytelling styles of gaming, film and television as literature. It is, perhaps even more than its predecessors, a book that could only exist at this point in time: a truly contemporary fantasy, even its core theme is the struggle to escape from the past ... Those using A Little Hatred as an ‘entry point’ to Joe Abercrombie, will, I suspect, enjoy it for sheer entertainment value, but miss the vast and tragic thematic underpinnings. Whereas those hungry to return to the world of the The First Law after a seven-year wait will be upset and rewarded in equal measure.
Read Full Review >>
See All Reviews >>
SIMILAR BOOKS
Fantasy

Ordinary Monsters
J M Miro
Positive
What did you think of A Little Hatred?
© LitHub | Privacy