A Little Devil in America: Notes in Praise of Black Performance 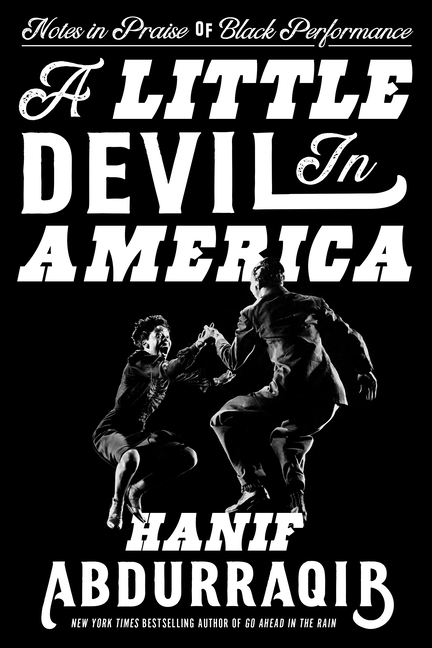 A project that unravels all modes and methods of black performance, in this moment when black performers are coming to terms with their value, reception, and immense impact on America. Abdurraqib examines how black performance happens in specific moments in time and space--midcentury Paris, the moon, or a cramped living room in Columbus, Ohio.

What The Reviewers Say
Rave Gene Syemour,
Bookforum
[A] wide, deep, and discerning inquest into the Beauty of Blackness as enacted on stages and screens, in unanimity and discord, on public airwaves and in intimate spaces ... has brought to pop criticism and cultural history not just a poet’s lyricism and imagery but also a scholar’s rigor, a novelist’s sense of character and place, and a punk-rocker’s impulse to dislodge conventional wisdom from its moorings until something shakes loose and is exposed to audiences too lethargic to think or even react differently ... Abdurraqib cherishes this power to enlarge oneself within or beyond real or imagined restrictions ... Abdurraqib reminds readers of the massive viewing audience’s shock and awe over seeing one of the world’s biggest pop icons appearing midfield at this least radical of American rituals ... Something about the seemingly insatiable hunger Abdurraqib shows for cultural transaction, paradoxical mischief, and Beauty in Blackness tells me he’ll get to such matters soon enough.
Read Full Review >>
Rave Christopher Borrelli,
Chicago Tribune
Music, [...] in the work of Hanif Abdurraqib, is more like a vehicle for getting closer to what it means to be feel joy, and history, and shame, and anger, and lonesomeness ... his writing, far from being the usual top-down music criticism, is spotted with small revelations and fleeting instances of recognition ...
Read Full Review >>
Rave Michael Schaub,
The Star Tribune
It's an absolutely brilliant book from a critic who's become one of the country's most essential writers ... Abdurraqib proves to be remarkably gifted at exploring all angles of a topic, linking them in deft and unexpected ways ... It's fascinating to witness Abdurraqib go from place to place and end up somewhere unexpected, but somehow perfect. In one of the most powerful pieces in the book, Abdurraqib reflects on performances of softness, drawing on topics like his mother's death and the Wu-Tang Clan's music video for 'Triumph' ... he's a brilliant writer, but also a deeply generous, loving one. Critics, as Abdurraqib would know, are taught to avoid superlatives, but sometimes there's no other choice. To call Abdurraqib anything less than one of the best writers working in America, and to call this book anything less than a masterpiece, would be doing him, and literature as a whole, a disservice.
Read Full Review >>
See All Reviews >>
SIMILAR BOOKS
Criticism

Some of My Best Friends: Essays on Lip Service
Tajja Isen
Positive
What did you think of A Little Devil in America: Notes in Praise of Black Performance?
© LitHub | Privacy