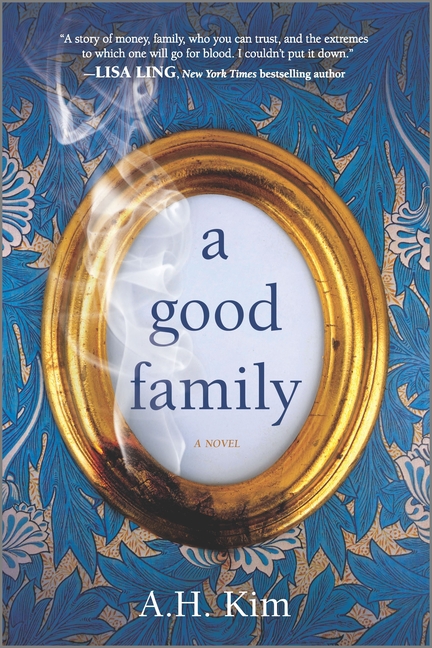 This is the story of the all-American family as it implodes under the weight of secrets, lies and the unchecked desire for wealth and power.

What The Reviewers Say
Rave Cari Dubiel,
Booklist
As Hannah digs deeper, the novel’s perspective moves between hers and Beth’s, giving the reader an insider view reminiscent of Orange is the New Black (2010). Surprising secrets abound in this fresh and inventive novel. Kim, a Harvard-educated attorney, brings a strong legal background to the intrigue, as well as a tender touch to character development and the interplay of the Min and Lindstrom family members. A standout debut.
Read Full Review >>
Positive Maureen Corrigan,
The Washington Post
Hannah and Beth take turns narrating the story, which tipsily loop de loops like a mosquito that’s buzzed through a pitcher of frozen margaritas. Plot is paramount in A Good Family. Readers should be forewarned that Kim isn’t concerned with psychological depth, literary style or atmosphere. Instead, the fun in reading the novel derives from allowing oneself to be tirelessly sucker-punched by plot revelations, chapter after chapter ... Rare in a suspense novel, Kim often makes events turn out better than we anticipate ... a lively suspense diversion that provides the eternally welcome assurance that nobody has it all, at least not forever.
Read Full Review >>
Positive Publishers Weekly
In chapters alternating between Hannah’s and Beth’s perspectives, the reader glimpses Beth’s easy time in the white-collar prison and Hannah’s wry commentary on the Lindstroms, as well as kept guessing over which characters are trustworthy. This addictive, over-the-top dramedy would make for a great TV series.
Read Full Review >>
See All Reviews >>
SIMILAR BOOKS
Coming Soon

On Java Road
Lawrence Osborne
Rave
What did you think of A Good Family?
© LitHub | Privacy