A Friend Is a Gift You Give Yourself 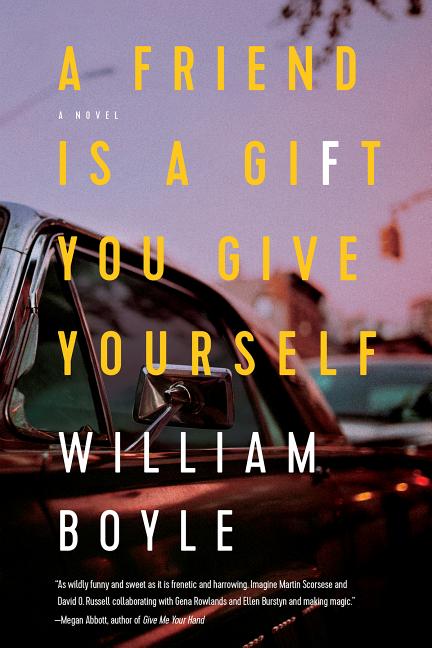 Goodfellas meets Thelma and Louise when an unlikely trio of women in New York find themselves banding together to escape the clutches of violent figures from their pasts.

What The Reviewers Say
Rave GABINO IGLESIAS,
NPR
... a gem of idiomatic dialogue. Every character has a unique voice and every conversation is a polyrhythmic marvel of New York accents. Part Martin Scorsese's Goodfellas and part Mario Puzzo's La Mamma, A Friend is a Gift You Give Yourself is a funny, gritty, touching narrative about the strength of three New York women caught in a world of abusive men, broken families, and mob violence ... Boyle has a knack for violence and telegrammatic prose. He uses dialogue to tell the stories of his characters and push the action forward, and when no one's talking, his writing is fast and sharp, with a touch of literary flair ... A Friend is a Gift You Give Yourself is a rarity; a fresh novel about New York's underbelly.
Read Full Review >>
Rave Jane Murphy,
Booklist
The Elmore Leonard–like cinematic prose begs for a film adaptation ... Recommend this triumph of moral ambiguity to fans of black humor, including that of Carl Hiaasen and Dennis Lehane, in addition to Leonard.
Read Full Review >>
Rave Lauren O\'Brien,
Shelf Awareness
William Boyle's work (Gravesend, The Lonely Witness) is some of the finest in crime fiction and while he ticks every box each time out, the emphasis changes. Character and nonstop action are gloriously on the rampage here ... Boyle's dialogue snaps and his sense of place is top-notch. This roller-coaster madcap tragicomedy is a great gift to give yourself.
Read Full Review >>
See All Reviews >>
SIMILAR BOOKS
Fiction

Before She Disappeared
Lisa Gardner
Rave
What did you think of A Friend Is a Gift You Give Yourself?
© LitHub | Privacy