A Dredging in Swann 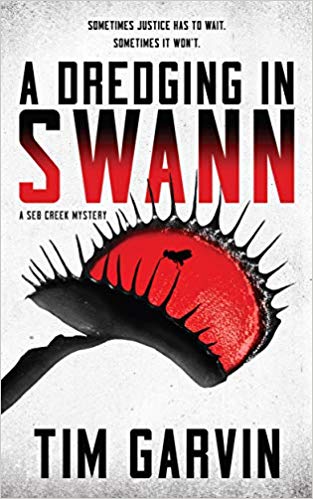 When a man who's recently been released from prison is found hanged in a well, North Carolina detective Seb Creek must figure out if it was an accident or murder—and what about those missing Stinger missiles?

What The Reviewers Say
Positive Don Crinklaw,
Booklist
...a novel that doesn’t quite know what it wants to be. A crime story? Plenty of that ... Or a mainstream novel that happens to bump into a crime or two? Maybe ... A subplot involving a transvestite in love with Sheriff Creek is treated sensitively. The prose is gin-clear and occasionally striking ... For readers patient with a ramble.
Read Full Review >>
Positive Kirkus
Investigating...two mysteries will take Seb all over the county, giving debut author Garvin a chance to display a true ear for dialogue and a talent for character portrayal, creating people who range from the comedic to the poignant. If Seb muses a little too often on the vagaries of life, well, he can be forgiven considering the vagaries of life he encounters ... This polished, beautifully written novel makes one hope Garvin keeps exploring Swann County for a long time.
Read Full Review >>
Positive Publishers Weekly
Two knotty cases preoccupy fair-minded, conscientious sheriff’s detective Sebastian Creek, a former Marine MP recovering from PTSD, in this intriguing series launch from Garvin ... The action builds to a suitably thrilling conclusion. Garvin skillfully draws together the many plot threads while also shining a compassionate light on PTSD sufferers bearing the scars of war.
Read Full Review >>
See All Reviews >>
SIMILAR BOOKS
Fiction

The Devil Takes You Home
Gabino Iglesias
Positive
What did you think of A Dredging in Swann?
© LitHub | Privacy