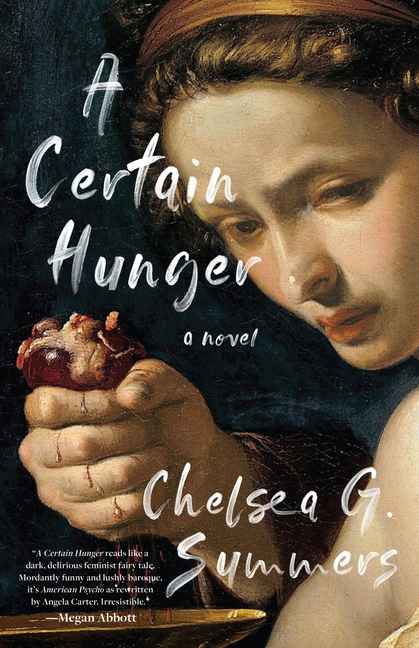 Food critic Dorothy Daniels loves what she does. Discerning, meticulous, and very, very smart, Dorothy's clear mastery of the culinary arts make it likely that she could, on any given night, whip up a more inspired dish than any one of the chefs she writes about. But there is something within Dorothy that's different from everyone else, and having suppressed it long enough, she starts to embrace what makes Dorothy uniquely, terrifyingly herself. Chelsea G. Summers' debut novel A Certain Hunger introduces us to the food world's most charming psychopath.

What The Reviewers Say
Positive Amy Silverberg,
The New York Times Book Review
A Certain Hunger has the voice of a hard-boiled detective novel, as if metaphor-happy Raymond Chandler handed the reins over to the sexed-up femme fatale and really let her fly ... Is the voice inviting? Sure, as inviting as a kidnapper holding a knife to your throat and threatening ... The descriptions of violence and gourmet cuisine are so visceral that I felt alternatingly hungry and sick to my stomach ... With Summers’s writing, I kept rereading sentences only as a double take, whispering to myself, 'Man, this lady is screwed up' — which is, I’d argue, its own kind of pleasure ... Don’t get me wrong, A Certain Hunger is not just a novel about the demise of a foodie serial killer. It’s also a history of the internet, and how it has democratized writing ... There’s a feminist argument, too, beneath the lyrical exaltations about sex with Italian men and cooking with duck fat ... there was also something soothing and escapist about reading a fictional villain’s story, especially at a time when real life feels like its own horror show.
Read Full Review >>
Rave Alex Beggs,
Bon Appétit
It was the 'semeny chowder' that did it for me. That was the moment I realized Chelsea G. Summers’ new novel, A Certain Hunger, went to the place we, Bon Appétit, and I, writer lady, never go. A place where sex and food entwine so grossly and explicitly that it makes you laugh, scream, and need a drink as stiff as this innuendo. This book is crazy. You have to read it ... Summers does a pitch-perfect impression of the highfalutin restaurant critic amped up on expensed rib eye and good Barolo, intoxicated by adjectives ... It’s American Psycho meets Ruth Reichl’s Save Me the Plums. Summers’ knife is twisted in Bret Easton Ellis’s book spine ... A Certain Hunger will have you thinking about the taste of human flesh deglazed in red wine, which feels like a nearly illegal sentence to write. Go to the dark place and let it rattle you.
Read Full Review >>
Rave Maureen Corrigan,
Washington Post
For those who can stomach it, A Certain Hunger, by Chelsea G. Summers is a macabre banquet of a suspense novel, serving up carnal and gustatory surprises. Ultimately, you may be disgusted with yourself — as I was — for devouring this morally repugnant tale with such gusto, but reading, like eating is a hard activity to regulate once the appetites are aroused ... Dorothy speaks like Humbert Humbert and behaves like Hannibal Lecter. It’s that Humbert-like voice — the flair for fresh imagery, ornate vocabulary and sly humor —that lures readers into this vile debut novel ... A Certain Hunger is distasteful, but it’s also naughty, witty and inventive. It may leave a bad taste in your mouth, but — unlike the slew of Gone Girl knockoffs that clog the offerings of suspense fiction these days — it won’t bore you.
Read Full Review >>
See All Reviews >>
SIMILAR BOOKS
Coming Soon

The Magnolia Palace
Fiona Davis
Rave
What did you think of A Certain Hunger?
© LitHub | Privacy