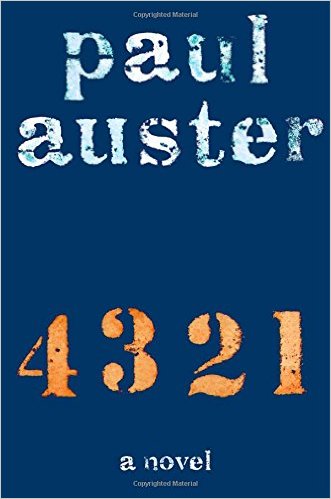 Nearly two weeks early, on March 3, 1947, in the maternity ward of Beth Israel Hospital in Newark, New Jersey, Archibald Isaac Ferguson, the one and only child of Rose and Stanley Ferguson, is born. From that single beginning, Ferguson’s life will take four simultaneous and independent fictional paths. Four identical Fergusons made of the same DNA, four boys who are the same boy, go on to lead four parallel and entirely different lives.

What The Reviewers Say
Rave Michael Schaub,
NPR
Auster's novel is never boring, but it can get confusing, especially at the beginning of the book — readers will likely find themselves flipping back ... Auster wisely chooses not to make Ferguson a Forrest Gump-type character, implausibly present for every significant historical moment. He also gives each iteration a subtle self-awareness about their parallel existences ... There aren't many authors who could pull an 880-page novel like this off, and it's a little surprising that Auster manages to do it so well. That's not because he's not a great writer, but he's never been known for his loquacity or long, flowing sentences before. But he's a gifted observer, and his writing is so energetic, he makes it work ... Occasionally, Auster goes on a little too long — the novel is perhaps a bit longer than it needs to be...Nonetheless, it's a stunningly ambitious novel, and a pleasure to read. Auster's writing is joyful, even in the book's darkest moments, and never ponderous or showy ... Auster proves himself a master of navigating these worlds, and even though all might not happen for the best in any of them, it's an incredibly moving, true journey.
Read Full Review >>
Positive Sam Sacks,
Harper\'s
The new novel may sound like a high-concept, formally pyrotechnic book, yet Auster’s approach to his material is hardly out of the ordinary — he draws on his own life experience, tweaking details and outcomes as it suits him. The pleasures 4 3 2 1 offers are fairly traditional as well. As a time capsule of New York and New Jersey in the Fifties and Sixties, it is consistently engrossing ... Auster’s late writing has shown something of a mania for inventories and in 4 3 2 1 at times this tendency metastasizes into unwieldy historical checklists. But more often the surplus description is born of generosity and exuberance ... Auster’s tilt away from the stifling control of locked-room mysteries toward the hail-mary risks of interwoven shaggy-dog coming-of-age stories is rejuvenating. He returns to many of his old hobbyhorses in 4 3 2 1, but here they are restored from the level of abstract metaphor to their rightful place in the real world ... Though the book’s plots are by and large little more than scaffolding for Auster’s lavishly appointed memory theater, they’re still fairly lively ... These latter portions flag. This is perhaps symptomatic of all coming-of-age stories, which address the process of relinquishing cherished attachments; the arc they describe moves toward loss and isolation. But it’s especially true for an author as single-minded as Auster.
Read Full Review >>
Positive David L. Ulin,
The Washington Post
This is not a roman à clef. Rather, Auster is after a multitiered examination of the implications of fate ... what’s most striking about the novel is the way its different narratives reflect, rather than diverge from, one another, what they share rather than what sets them apart ... 4321 is a long book, and it can meander through the details and detritus of a life — or quartet of lives. Still, what’s compelling always is its sense that the most important time exists within us, the time of memory and imagination, out of which identity is forged.
Read Full Review >>
See All Reviews >>
SIMILAR BOOKS
Coming Soon

The Seven Moons of Maali Almeida
Shehan Karunatilaka
Positive
What did you think of 4 3 2 1?
© LitHub | Privacy