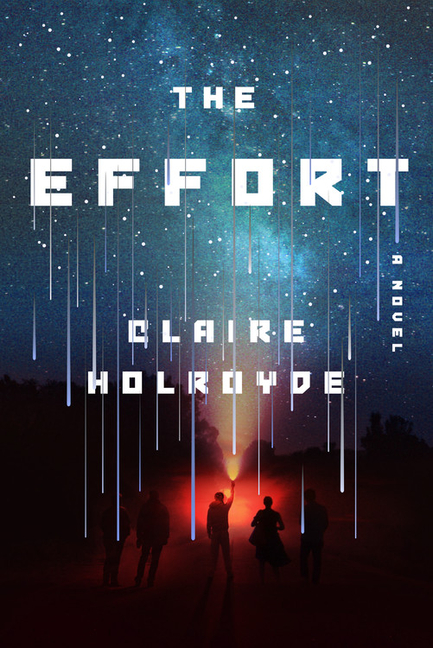 When dark comet UD3 was spotted near Jupiter's orbit, its existence was largely ignored. But to individuals who knew better, the threat this eight-kilometer comet posed to the survival of the human race was unthinkable.

What The Reviewers Say
Positive Ian MacAllan,
Chicago Review of Books
The Effort paints a bleak picture of humanity’s final days, but ultimately offers a message of hope; our survival relies on exploiting the most fundamentally human trait—connecting and trusting one another ... The novel has a broad scope, and diverse characters representing every continent, and many different cultures. Many of these people are only briefly introduced, and sideline narratives follow these tertiary characters adding to the details of the world. They have rich backstories, and though we may only glimpse at their lives, we learn enough to care about them. These side narratives are connected to the main protagonists—family and friends—but primarily exist to better shape our perception of the world. These side narratives also serve to balance the pacing of the novel, drawing out the narrative time to better represent the passage of weeks and months. The Effort is a political novel rather than an action space adventure. The real crisis is not the incoming asteroid, but humanity itself, and the reaction to the threat of imminent death.
Read Full Review >>
Positive Allen Adams,
The Maine Edge
It’s a story of mankind’s attempt to stave off the extinction-level event heading their way, all while dealing with the harsh reality of what it might mean when the fact that the end is nigh becomes widely known. It’s a taut, thrilling story of people committed to saving the world even as the world turns against itself ... The Effort is a bit of a paradox, an undeniably bleak tale that still somehow contains small moments of hopefulness. Telling the story of a mission whose best-case scenario is one where only most of the world is in ruins is an obvious challenge – unrelenting darkness and despair is no way to go through life ... Yet Holroyde manages to do it while still leaving a few cracks through which light might shine. Not huge cracks, mind you. Not deus ex machina-sized cracks. Human-sized cracks that allow room for small happinesses in the face of massive disaster. As you might imagine, there’s a propulsive quality to The Effort. The narrative is infused with an inevitability, one accentuated by the author’s decision to include a tag in each chapter heading that indicates just how many days we are from the end of everything. Those tags only add to the steady undercurrent of urgency that flows through the entire story, an omnipresent tension that the reader only really notices on the rare occasions that Holroyde decides to let them breathe ... It’s a taut page-turner of a read, narratively engaging and compulsively readable. Ultimately, your biggest effort with The Effort will be putting it down.
Read Full Review >>
Positive Noah Berlatsky,
The Observor
After introducing Ben and Amy, Holroyde wanders away from them with a leisurely pace that belies the comet countdown. She provides the background and viewpoint of other people working on the Effort, particularly Love Mwangi, an East African-American translator who speaks dozens of languages. One of the main characters, Zhen, a quiet female Chinese scientist and math genius with facial scars and a hidden talent for defying authority, doesn’t show up till more than half-way through the book ... Despite such stresses and reversals, The Effort, in the tradition of science fiction novels past, manages to sweep aside national, sectarian, and governmental boundaries to at least offer a glimmer of hope. It serves as a small, miraculous contrast to a world which, for the most part, simply folds its wings like that eagle and sinks when threatened with space debris, or with its own consumption patterns—or with a virus that Holroyde couldn’t have known about when she wrote the novel. Do we die with a bang, with a whimper, or both? Or do we find some way to live? The Effort suggests maybe all three at once. But Holroyde is aware that her novel is a story; her ending isn’t the real ending. That we’ll need to find for ourselves, one way or the other.
Read Full Review >>
See All Reviews >>
SIMILAR BOOKS
Fiction

Sorrowland
Rivers Solomon
Positive
What did you think of The Effort?
© LitHub | Privacy