Jan Grue tr. B. L. Crook
Pan The Women\'s Review of Books ... after reading page after page of thought-chunks that are skillfully arranged—memories, philosophical commentaries, and reviews of books and cultural events, all freely rotating—I feel I have read a book of evasions. Neither the author nor the people in his life are realized or knowable on the page. He’s not interested in them, except in the way they are instrumental to his sense of himself. And this self is often in shadows—selling you something ... Grue’s book works when he allows us to see his body directly ... My chief quarrel with Grue is that he doesn’t situate himself with other people, not even other people with his diagnosis. He mentions only once the movement for disability rights—activism that has probably made possible the amount of access he has had to the world ... his comments grow increasingly tone deaf ... In the title Grue has chosen and elsewhere in the book he is saying: I’m still a man. Appearances to the contrary notwithstanding. He didn’t need to worry. The last thing a man is going to do, in whatever body he’s born in, is understand that his condition has relegated him to the status of any woman on the planet. He will do anything to skirt this identification. Thus, if we needed more evidence, we know the author of this book is a real man. 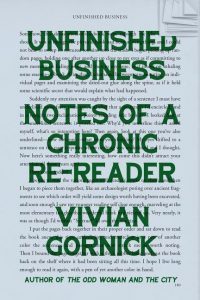 Vivian Gornick
Rave The Women\'s Review of Books This is not a guide for how to be. The books that draw her are madeleines, summoning the self she was at previous readings. Criticism in Gornick’s hands is a sneaky form of autobiography—a series of love letters to moments she was jolted into consciousness. Sneaky and enlivening because the narrator looks out at something other than itself, and in that looking reveals a self to the reader ... some stunning examples of literary analysis ... Gornick’s jumpcuts are richly entertaining. Also, they dramatize the way we become known to ourselves through reading ... Arousal and deadened feeling are two hot spots for Gornick in whatever she reads, and by revealing the private nature of these themes to us, she enlarges her authority to speak about them ... As the chapters unfold, the delight Gornick takes is in the provisional nature of any reading, and her prose takes flight, growing more cunning and imaginative. In the third chapter, like the fulcrum of a seesaw, she tells a startling and crazy story that is so narratively right for her book, she would have needed to invent it if it hadn’t happened. 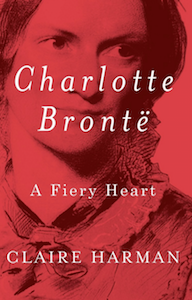 Claire Harman
Positive The Washington Post Do we need another Brontë bio, given the dozen or so captivating meditations that have followed Elizabeth Gaskell’s brilliant and gossipy pioneer study, published in 1857? Of course we do. Harman’s story is about how writers write. Her subjects are not accidental geniuses, rather women with time.
© LitHub | Privacy