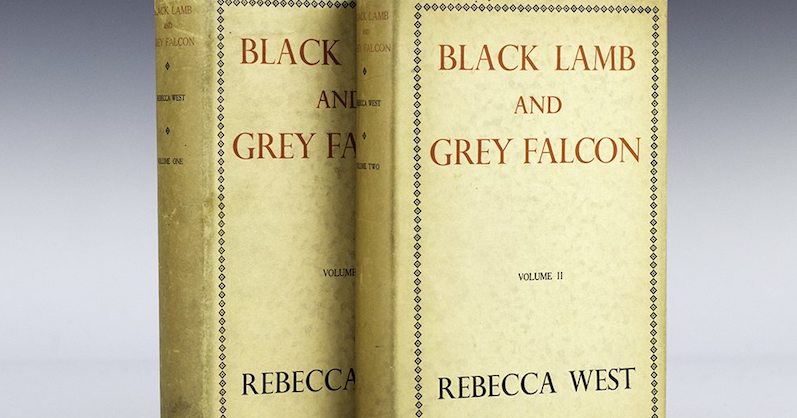 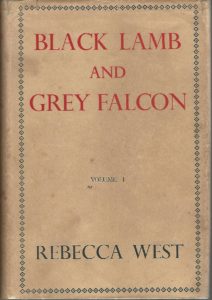 “The gray falcon is an enigmatic figure in a Slav folksong about a military defeat in the year 1389; and it offered the Serbian king a choice which expresses the sad dilemma of modern pacifism and points to its tragic results. The black lamb is the symbol, seen in a gypsy rite in Macedonia, of false — and thus of impious — sacrifice; and the terrible complexity of the choice between good and evil becomes not less but more tragic when man identifies himself with the false altar’s hapless victim rather than with its cruel priest. For the king chose piety and immolation instead of the effective defense of Christian civilization against its oncoming enemy; ‘all was holy and honorable’ within him, but like the celebrants of false sacrifice, he had set death before life. He and his soldiers died vainly on that consecrated but disastrous battlefield. And slavery closed down upon the Balkan peoples — no legend here, but history — for 500 years.

This may seem remote and recondite, but it is not. It is part — the distilled spiritual essence — of what may be accurately described as a most brilliantly objective travel book; although the travels are most significant for their observation of history. 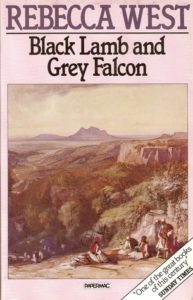 “Black Lamb and Grey Falcon bears the travel-book subtitle of A Journey Through Yugoslavia, and it follows with consummate success the travel-book formula of history and description and characterization on a thread of personal experience. But it is safe to say that as a travel book it is unique. In two almost incredibly full-packed volumes one of the most gifted and searching of modern English novelists and critics has produced not only the magnification and intensification of the travel book form, but, one may say, its apotheosis. Rebecca West’s ‘Journey Through Yugoslavia’ is carried out with tireless percipience, nourished from almost bewildering erudition, chronicled with a thoughtfulness itself fervent and poetic; and it explores the many-faceted being of Yugoslavia — its cities and villages, its history and ancient custom, its people and its soul, its meaning in our world.

The journey here specifically chronicled began with the arrival of Miss West and her husband at Zagreb at Eastertime in 1937. They were met by three friends of an earlier visit, and at once the ‘situation’ began. For this was Croatia. Of the three Yugoslavs one, the Serbian poet Constantine, was an official in the Yugoslav Government; another, the middle-age Croat Gregorievitch, had fought for his people’s freedom and found it in union with ‘their free Slav brothers, the Serbs’; the third, the young Croat scientist Valetta, was a separatist. The meeting crystallizes the book’s interest not only in its presentation of the Croatian problem, but in showing the reader with keen understanding what each of these patriots felt and why. And the character of the Yugoslav journey is caught in another way also: if there was much political argument in Zagreb, there was lively intellectual exercise in other talk, too. And Constantine, the poet, who had studied philosophy under Bergson, was the most fascinating talker, as he was also the most poetic and extravagantly individualized of them all. Throughout this book his talk runs like a clear stream, rippling or deep. But Constantine, who was to accompany his friends to Bosnia and Herzegovina and Macedonia and Serbia and Montenegro, was to show himself stricken by a division worse than the problem of Croatia: his blood was Jewish, his allegiance was Yugoslav, his culture was international; and he had a German wife. 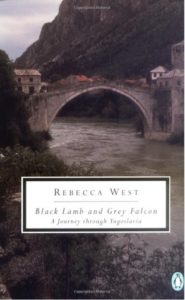 “Meanwhile, Rebecca West continues those travels in space and time, cause and effect, the Slav pattern of life, which give her book its three-dimensional wholeness. The visit to the beautiful ancient culture of an old homestead of Korchula in Dalmatia, the re-creation of crucial medieval history by Kossovo Field, the sight of mountain peasant women who live free-spirited in bondage in Bosnia, talk with an dedicated priest in cheery exile at Neresi in Macedonia and elsewhere in Macedonia with Bulgarian partisans — they may be chosen at random, each unified and alive. ‘The authentic voice of the Slav’ spoke from a richly dowered visit to a sanitarium in Croatia, in that robustness of the spirit which holds that ‘the way to make life better is to add good things to it’ rather than to ‘take bad things away.’ In Old Serbia the ‘most powerful monarch of his time in Europe,’ the fourteenth-century Emperor Stephen Dushan, was seen as guided by ‘the desire that governs the Slav of today, the desire to know the whole.’ There was always a deep urgency of life among these peoples, which could keep their love of freedom rebellious in enslavement, their spirits proud and wise and dignified in poverty and ignorance, their minds speculative and individual. But there was dualism, too. Acceptance of tragedy, says Rebecca West, is the basis of Slav life. and it is not for nothing that, as made plain in the story of Trogir and suggested elsewhere also, the Manichaean glorification of suffering and death was strong among them long ago. Even so they did not lose sight of the value of independence; and if that very spirit, in its aspect of dissension, was played upon through centuries by the divide-and-rule policy of their various conquerors, still it gave them persistence, with fortitude: ‘The Slav is never subject, not even to himself.’ 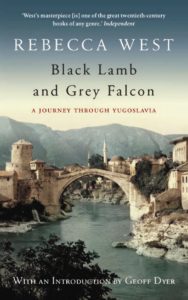 “It was at Serajevo that Miss West made this epigrammatic comment. And the detailed recital of the assassination which made that city a punctuation mark in modern history is brought to an impressive climax in the meeting with the sister of one of the young conspirators against the Archduke Franz Ferdinand, herself a rare character. Individual men and women are ever coming and going through this monumental chronicle, and whatever their significance they are always individual — like the peasant woman in the church at Skoplje, with her ‘terrible stony strength of Macedonia,’ and the ‘last drops of the Byzantine tradition,’ cupped in her destitution like water in a rock.

With thousands of pieces, so, Rebecca West has made her mosaic, each scene or event or character or re-creation of history a vivid whole, fitted with an art that seems almost casual into its place in the larger entity. From the point of view of continued reading a book of half-a-million words is, of course, far too long. The author never loses her freshness, but the reader may. Yet if it is not to be read at — so to speak! — a sitting, Black Lamb and Grey Falcon is to call the reader back, I think, in pertinent or haunting recollections, to many swift returns to read again. In the alchemy of Rebecca West’s literary art those words are transmuted, to become elements of vital substance, enlightenment, and the stimulus of provocative and echoing thought; and this is the case whether they are concerned with Yugoslavia itself, with the terrible world we live in, or with the question and decisive mind. One passage after another can be taken out and re-read for its own sake, not least among them, certainly, those that can be read as essays. Discussions of empire, the portrait of an Epicurean, a parable of Cadmus and literature, the incomparable analysis by Miss West’s husband of the mind that has ‘no sense of process,’ but merely sees and grabs — such reflections fill the mosaic background with gold. 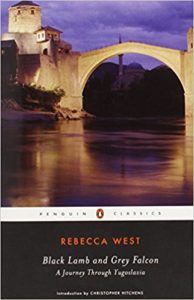 “And reflection and the historical sense fuse in the epilogue which unites the picture of Yugoslavia with the vision of the world and gives the book its climax. ‘Violence was all I knew of the Balkans, all I knew of the South Slavs … I had come to Yugoslavia because I knew that the past had made the present and I wanted to see how the process works,’ Rebecca West wrote in an early chapter. but long before the world’s tragedy fills the horizon of her final pages the reader has grasped the inevitable sweep of her further purpose — to show ‘the past side with the present it created.’ For to do that is to look at the present, in sanity and valor, for what it is: the hairline of balance where the sad past of Yugoslavia may become the future of all the civilized world. ‘The difference between Kosovo in 1389 and England in 1939 lay in time and place and not in the events experienced … Defeat, moreover, must mean to England the same squalor that it had meant to Serbia.’ The book that was begun in the thoughtful prescience of 1937 was finished in the dreadful empirical knowledge of 1941.

It is so that the choice offered by the gray falcon, and the inner defeat of the black lamb’s false sacrifice, hover in stark reality over all our present world. The disaster of Kosovo brought age-long doom to one important part of Europe. But the downfall of France has been a tragedy ‘supreme in history.’ And Rebecca West knows how close England was to a like immolation before its people made their heroic affirmation of life and resistance to evil. Such an affirmation was Yugoslavia’s defiance to Hitler, though it could hold no hope of victory. On the challenge to affirmation ends this journey through the destiny of man.”