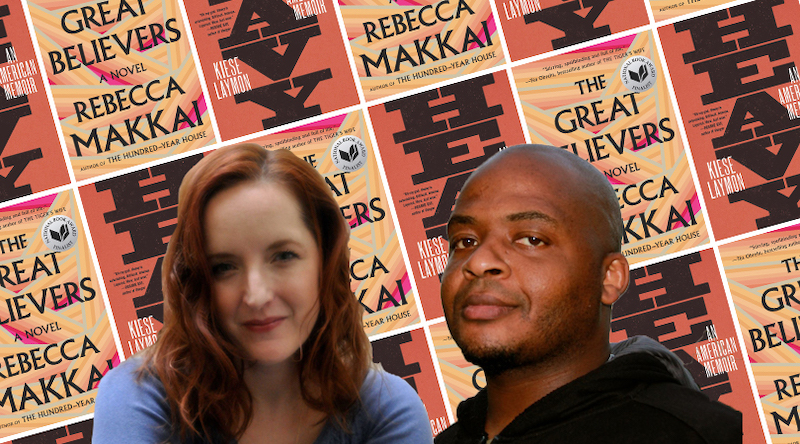 The American Library Association has chosen Rebecca Makkai’s The Great Believers and Kiese Laymon’s Heavy: An American Memoir as the winners of the 2019 Andrew Carnegie Medal for Excellence in Fiction and Nonfiction, respectively.

The awards, established in 2012, are the first single-book awards for adult books given by the American Library Association and “reflect the expert judgment and insight of library professionals and booksellers who work closely with adult readers.” They also come with a purse of $5000. This year’s award winners were announced at the ALA’s Midwinter Meeting in Seattle yesterday. As part of a statement issued yesterday, the ALA had this to say about the winners:

In his artfully crafted and boldly revealing memoir, writing professor Laymon recalls the traumas of his Mississippi youth; the depthless hunger that elevated his weight; his obsessive, corrective regime of diet and exercise; his gambling, teaching, activism, and trust in the power of writing.”

Below, you’ll see a sample of what the critics wrote about The Great Believers and Heavy.

Congratulations to Rebecca and Kiese!

“The Great Believers is, as far as I know, among the first novels to chronicle the AIDS epidemic from its initial outbreak to the present—among the first, that is, to convey the terrors and tragedies of the epidemic’s early years as well as its course and its repercussions over the decades. Makkai puts the epidemic (which, of course, has not yet ended) into historical perspective without distancing it or blunting its horrors … It would be futile to try to convey the novel’s considerable population, or its plots and subplots, though both population and plots are ingeniously interwoven. The question ‘What happens next?’ remains pressing from the first page to the last … Although I can’t help wishing the two stories had worked together more potently, that doesn’t detract from the deep emotional impact of The Great Believers, nor does it diminish Makkai’s accomplishment. She has borne unblinking witness to history and to a horrific episode already in danger—among Americans, that is—of becoming a horror story out of the past.”

“…a heartbreaking meditation on AIDS, loss, and friendship … By deftly weaving together Yale’s, Nora’s, and Fiona’s stories, Makkai finds surprising resonances across time and experience, offering a timely commentary on the price of memory and the role of art in securing legacies at risk of being lost … it’s tempting to see The Great Believers as the latest entry in the genre of straight women writing about gay male trauma … Makkai’s focus here is on recuperating the overlooked history of the women caretakers … What makes The Great Believers great is Makkai’s skill at uncovering facets of a historical record many of us may feel we already comprehensively understand. What makes it an enduring work of fiction is the elegance with which it transmutes the quotidian…into an evocative time capsule that captures the essence of an entire life.”

“Makkai spikes a sadly familiar historical narrative with kaleidoscopic compassion … Makkai is intuitive, evading traps of sentimentality. She leans on her established strengths—realistic characters, emotional complexity—and in the context of this 80s milieu, their potential is bracingly realized. Her relaxed prose flows; her fascination with human behavior enhances the book’s vivid ensemble. Makkai’s writing even assumes an effortless sweep, plunging readers into a saga of mesmerizing intimacy … Makkai has a real feel for grief, achingly describing the city she’s long known inside and out as it’s suddenly permeating loss. You don’t just see the ghosts of her Believers—you spend time with them, learn their flaws and virtues and darkest fears, cry at their funerals right alongside those who’ve known them for decades.”

“I have dog-eared too many pages to close my copy of Kiese Laymon’s Heavy: An American Memoir. I found something noteworthy on almost every page … This is a memoir to read and reread, as Laymon recommends readers do with all books of significance … Dear white people, please read this memoir. Dear America, please read this book. Kiese Laymon is a star in the American literary firmament, with a voice that is courageous, honest, loving, and singularly beautiful. Heavy is at once a paean to the Deep South, a condemnation of our fat-averse culture, and a brilliantly rendered memoir of growing up black, and bookish, and entangled in a family that is as challenging as it is grounding.”

“The idea of excellence is a wire, sometimes barbed, often electrified, strung through nearly every page of Kiese Laymon’s memoir, Heavy … And part of the wonder of Laymon’s book is his commitment to getting as close to the truth as possible, even when it means asking painful questions about what we owe the people who brought us into this world and, somehow, managed to keep us alive in it … If this book succeeds as a thoughtful and hard-wrought examination of how a black man came into his own in a country determined to prevent that from happening, it’s because of the painstaking manner in which Laymon walks the reader through the various perils and costs of striving … as Laymon’s excellent memoir suggests, a refusal to ask and answer difficult questions about ourselves and the people we love can be lethal.”

“Kiese Laymon’s memoir Heavy is many things, all of them searing, brilliant, and unflinching in honesty, no matter what heartbreaks or difficulties rest at the end of the road his honesty carves out … In Heavy, the story begins messy, and ends messy, and in between we learn why the mess was worth fighting through, and fighting for.”