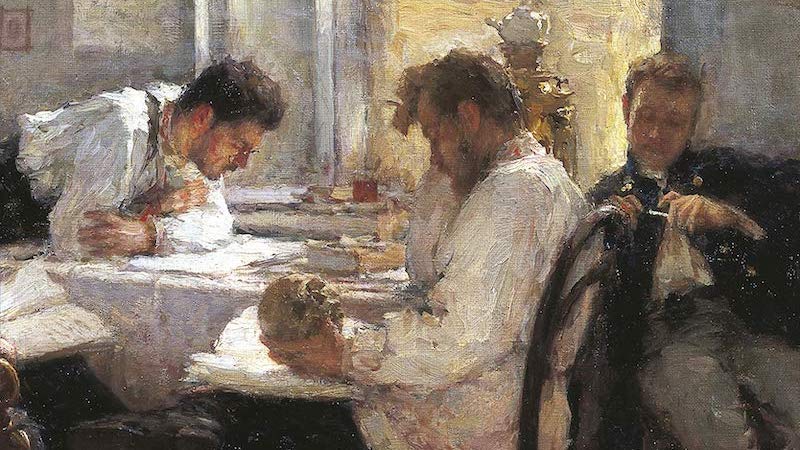 Putin, Dostoevsky, and a Dallas Bookstore

Just days before my books podcast, Across the Pond, launched a public collective read of the nineteenth century classic Russian novel, The Brothers Karamazov, Russian troops invaded Ukraine. Undeterred, we proceeded as planned and, beginning March 1, curious readers from several states and as far away as Australia and France joined me in a sixty-day literary discussion, #conquerkaramazov, reading 15 pages each day of Fyodor Dostoevsky’s eight-hundred-page masterpiece, and sharing our impressions and questions on Twitter and our podcast. This while we and the world witnessed Putin’s brutal campaign to take Ukraine’s land and forcibly overthrow its government without regard to the cost of innocent human life. We completed the collective read on May 1, and in the days since, I’ve been reflecting on how Russia’s war against Ukraine affected the way we read and interpreted Dostoevsky’s 1880 novel.

In a certain respect, The Brothers Karamazov is a murder mystery. The patriarch of the Karamazov family, a man reviled in his provincial town for being rude, lecherous, greedy, drunk, and generally buffoonish, is murdered in his bedroom. The chief suspect is his eldest son with whom he’s been battling over money and the affections of a local seductress. But even more than a mystery, the novel reflects the ideas that Dostoevsky grappled with most of his life: is Russia part of Europe? Is there something exceptional about Russia and the Russian way of life? How should the Russian state and the Russian church coexist? Can we determine what is immoral outside of religion? Is redemption possible? Is there any punishment more profound than a guilty conscience? Are personal freedoms requisite to personal happiness? Why do innocents suffer brutality and death?

Early in the novel, Ivan, the middle Karamazov brother confronts a church elder with the idea that much of humankind has rejected any possibility of immortality and that without hope of life after death, there is no longer virtue. In other words, because nothing is immoral or forbidden, then “everything is permitted.” Reading the implications of Ivan’s thesis for the novel’s characters, it’s perhaps easy to see this idea in Putin’s and his military’s execution of the war and the Russian government’s denials and lies about it, amplified by Russia’s government-controlled media.

Another idea from the novel that reverberates in today’s headlines is Russian exceptionalism. In the trial of the eldest Karamazov son for the murder of his father, the prosecutor references a well-known passage from the revered novel Dead Souls by Nikolai Gogol, published some 50 years prior to The Brothers Karamazov. (It is interesting to note that Nikolai Gogol was born and lived the first 20 years of his life in Ukraine before moving to Russia to enroll in university.)

In Dead Souls, Gogol uses the image of a speeding troika (a Russian passenger carriage drawn by three horses) that travels faster than anything else, as a metaphor for the Russian nation. Gogol writes that this rushing troika is full of divine inspiration, leaving other nations no option but to stand aside respectfully and make way for her.

But when the prosecutor in the Karamazov trial cites Gogol’s metaphor he turns it on its head, questioning whether European nations will continue to stand aside respectfully should Russia fail to punish its citizens for murder. In that case, insists the prosecutor, European nations would halt the mad troika “with a view of saving themselves, enlightenment, and civilization.” It’s hard to escape the parallel; halting the troika is precisely what western nations are trying to do now.

Like Gogol’s divinely inspired troika, Russian nationalism and the idea of Russia’s messianic destiny plays a significant role in Dostoevsky’s narrative. Certainly, we see this in the way that the church elders in the novel talk about the role of the Russian Orthodox Church, but also in the way that several of the town’s citizens view their country and culture as different or superior to Europe’s, and their way of life and outlook as something other nations should emulate. In the current war, we see the Russian Orthodox Church supporting Putin with Patriarch Kirill, the head of the Church, adding his voice to Putin’s war propaganda, saying that Russia’s attack on Ukraine is a defense of conservative values against a morally corrupt West.

So what value does a nineteenth century novel like The Brothers Karamazov have today, when Russia is violating Ukraine’s sovereign borders, perpetrating crimes against humanity, and attempting to bomb civilian populations into submission? I hope that it may equip readers with a better understanding of some of the cultural underpinnings of this war.

And with this understanding, how should we respond? Should we simply ignore or marginalize all things Russian in protest, to signal our outrage for the horror that Russia continues to commit in Ukraine? This approach has been used by certain venues in the West that have canceled the participation of Russian artists and performers. I cannot agree with this approach. Now is the time to seek out Russian artists and performers, to read Russian (and by all means Ukrainian) literature. When we take the initiative to discover or rediscover what Russian thinkers, writers, and artists have to say about their society, values, and place in the world, we acknowledge that informing our own perspective is vital to fulfilling our civic duty as citizens of the world.

This essay was originally published in The Dallas Morning News

Lori Feathers is a freelance book critic who lives in Dallas, Texas. She authors the essay series “In Context” for Literary Hub's Book Marks, as well as Words Without Borders‘ regular feature, “Best of the B-Sides.” Lori is a board member of the National Book Critics Circle, and her work appears in various online and print publications. She co-owns Interabang Books in Dallas, where she works as the store’s book buyer.
Share:
© LitHub | Privacy
%d bloggers like this: