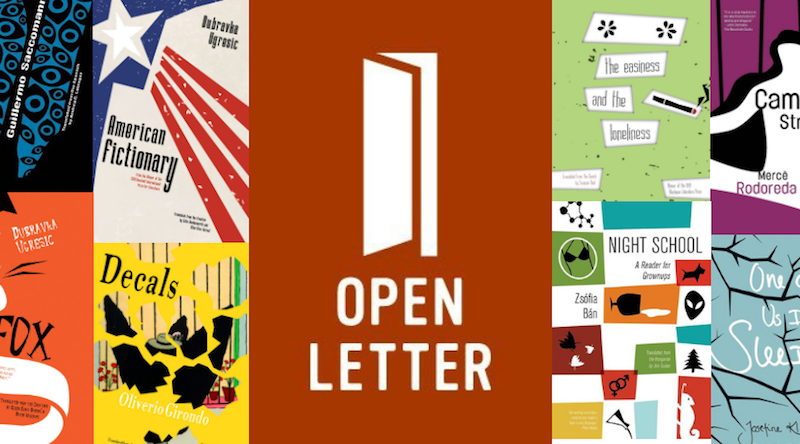 Like pretty much every holiday, Thanksgiving can be fraught. Setting aside the belligerent tirades of that one cousin or uncle or grandmother, and the growing fear that you will never not have to explain why you chose to pursue a liberal arts degree, there’s also the whole mythology-constructed-to-mask-expansionist-violence thing. But there is one Thanksgiving tradition I can absolutely get behind: the expression of gratitude for those things we often take for granted.

So, here goes: I give thanks for those fearless souls who ignored the odds and withstood the perplexed stares of friends and family to found independent publishing houses dedicated to literature in translation, many of whom decided to do so because they were once deeply moved by a work brought to them from another language and believe deeply in the importance of making that experience possible for others. In giving this thanks, I’m going to inaugurate the Publisher Spotlight, a periodic feature that will focus on the contributions of a literary translation press and a few of its latest titles.

So let’s begin at the beginning, with Open Letter Books, one of the most venerable operations among the recent crop of publishing houses dedicated primarily, if not exclusively, to translation. Open Letter just celebrated its tenth anniversary and has published over 100 books from dozens of countries. But there’s more to the story. Open Letter’s indefatigable Publisher, Chad Post, for whom the fine people at Words Without Borders recently expressed their gratitude with the prestigious Ottaway Award, has been a fierce advocate of literature in translation for years, creating Three Percent, a blog dedicated to all things translation, and the Best Translated Book Award, both of which have contributed tremendously to the visibility of translation. He also created and maintains a translation database to track what works are being published, from where, and by whom. Oh, and there’s a podcast, too.

I sent Chad a few questions to answer in his extensive spare time, and he was kind enough to get back to me with this:

Heather Cleary: So, how did Open Letter Books begin?

Chad Post: The seed for Open Letter began way back in 2006 when the University of Rochester started talking about creating a series of translation programs for undergraduate and graduate students. In putting these together, faculty and administrators alike wanted to include three key components: academic coursework (like in translation theory), a practical thesis (full book length translation or portfolio), and hands-on experience to connect them to the larger publishing world (Open Letter). It took a little while to get this all up and running, but in 2007 we launched the Three Percent website as a way of connecting with the field—translators, authors, publishers, booksellers, and readers—through articles about publishing and international literature and reviews of books published in translation, and in September 2008, Open Letter published its first title: Nobody’s Home by Dubravka Ugresic. All along, we’ve been a team of three full-time employees, publishing ten titles a year, running the Reading the World Series, maintaining Three Percent, managing the Best Translated Book Awards, and curating the Translation Database (now housed at Publishers Weekly).

HC: What are a few of your favorite OL titles from over the years?

CP: Such a hard question! One of my early favorites was Macedonio Fernández’s The Museum of Eterna’s Novel (The First Good Novel), which is one of the most innovative books that we’ve ever done. The first half is a series of prefaces—some to the readers, some to critics, etc.—and the second half is the author putting his characters through the paces so that they can be good characters in his novel. Very Flann O’Brien-esque! Macedonio was quite a character in his own right. He was Borges’s mentor, attempted to start a commune (he was thwarted by mosquitos), ran for president twice (by leaving cards with “Macedonio” printed on them at various cafes), and, like Pessoa, didn’t really publish much during his lifetime. Instead, he left behind a treasure trove—including poems that were hidden in sugar jars for years.

A more recent favorite has to be Dubravka Ugresic’s Fox. A “Best of 2018” title in both Publishers Weekly and Kirkus, Fox is an incredibly ingenious novel about how stories get written. In fox-like fashion, it morphs between genres, sometimes reading like an essay, sometimes like autobiographical fiction, keeping the reader on her toes as to how all these various ideas and references fit together. With its focus on the “footnotes” (frequently women) that are transformed into lasting works of art (like Lolita), she manages to sneak in and recapture a place in literary history. It’s a wonderful book to read in combination with our Two Month Review podcast on it, especially since Ugresic helped us puzzle certain clues out, and you get to see the way in which she interrogates her own approach to literature as a bombastic young author and as a wizened world-renowned superstar.

Zone by Mathias Énard is another favorite, not only because it’s one of the great novels of the past decade, but because it was one of the books that really put us on the map. We bought the rights at the Frankfurt Book Fair, and immediately got some great pre-pub attention for signing on this 518-page, “one-sentence” book. When it finally came out—in Charlotte Mandell’s incredible translation—it got more publicity for us than any other title had to date. We actually sold out of the first print run in just over a month. Énard’s reputation has continued to grow, through our publication of Street of Thieves, and then Compass (with New Directions), and Zone has remained one of our top selling books of all time.

There are so many more I could name though . . . Any and all of the Mercè Rodoreda. Rodrigo Fresán! Quim Monzo and Georgi Gospodinov’s The Physics of Sorrow. . .

HC: And which sparkling new titles are you most excited about? (All of them, I know, but humor me.)

CP: In addition to the second part of Rodrigo Fresán’s trilogy (The Dreamed Part, November 2019), we have two books coming out next year that I’m particularly hyped about. The first is Flowers of Mold & Other Stories by Seong-nan Ha, which is a wonderfully unnerving collection of stories. It reminds me a bit of Yoko Ogawa’s Revenge, or the work of Brian Evenson, mostly in the way that the character’s belief in what the world is like deteriorates in strange, unsettling ways. A woman plagued by gaps in her memory can’t figure out if her husband is having an affair with the neighbor. A man having trouble connecting with the people in his apartment building starts going through—and collecting—everyone’s garbage to figure out who they really are. A group of business owners objecting to a potential rent increase decide the best way to cope is to off the landlord while they’re on a retreat. Fun, dark stuff!

And then there’s The Translator’s Bride by João Reis. A translator himself, this is set in an unnamed (probably) Portuguese city in the 1920s and is a fast-paced internal monologue of a translator whose fiancée has just left him to sail away to a better life, whose landlord is an overbearing woman always cheating him out of food, and whose publishers refuse to pay him for his work on time. (Sound familiar, translators?) It’s like a light-hearted Bernhard that switches brilliant from internal rants about the disgusting, dirty city and its insufferable inhabitants, and the translator’s attempts to convince everyone he’s a great guy through flowery, overly-complimentary speeches. Amazing book that, through a twist of fate, was translated by João himself.

HC: You’ve been a fierce advocate of literary translation for more than a decade, and have kept more plates spinning in that time than I can count. What keeps you going?

CP: This is going to sound hokey, but it’s definitely the joy of working with genius authors and translators, of holding a new book in your hands, and of being able to convince someone—student, bookseller, reader—that they should invest X hours of their life in this particular experience. I love finding new authors to introduce to the world (just wait for Sara Mesa—y’all are going to lose your collective minds), and working with student translators is something I’ll never tire of. Even though the number of people reading/listening to my weekly Three Percent posts and our two podcasts is relatively modest, working on those keeps me going. I love thinking through issues of translation and publishing in those venues—even if most of the time it just results in jokes or statements that ruffle feathers.

CP: I want us to be doing exactly what we’re doing today, but in a way that has a much larger impact. Within three years we need a book to really take off for us and/or a massive donation from an individual. Either one of those things would allow us to reach more readers and translators, and help us better achieve our mission. Taking a more global look at things, I want the nonprofit publishing industry to continue to expand—mostly through new sources of donated income—and I want translated literature to be as commonplace as any other type of writing. It’s useful to draw attention to things like the “3% problem” and to have publications highlight translations (making up for the fact that they generally don’t), but sometime soon everyone should just accept that literature includes writers from all over the world, and that there’s a benefit to reading and celebrating great books wherever they come from, whether its from another country or a small press. (This sounds hopelessly idealistic, especially in contrast to my usual writings, but it really is what I hope for. And the reason why my essays frequently turn ranty—because this isn’t the way the world is right now.)

CP: The smart thing to do would be to wait and see where the big free agents—Harper and Machado in particular—land, or to go with Houston, since they have virtually no flaws. That said, my team, the St. Louis Cardinals, just hired Stubby Clapp to be their first base coach. Based on his name alone, I don’t see how the Cardinals can’t win it all next year . . . Plus their pitching staff is super talented, Mike Matheny is FINALLY gone, and our young players—like Bader and O’Neill—are positioned to have breakout seasons. BASEBALL IS ONLY FOUR MONTHS AWAY AND I CAN’T WAIT. I’M ALREADY JONESING FOR STEAMER PROJECTIONS AND NEW WRC+ LEADERBOARDS.