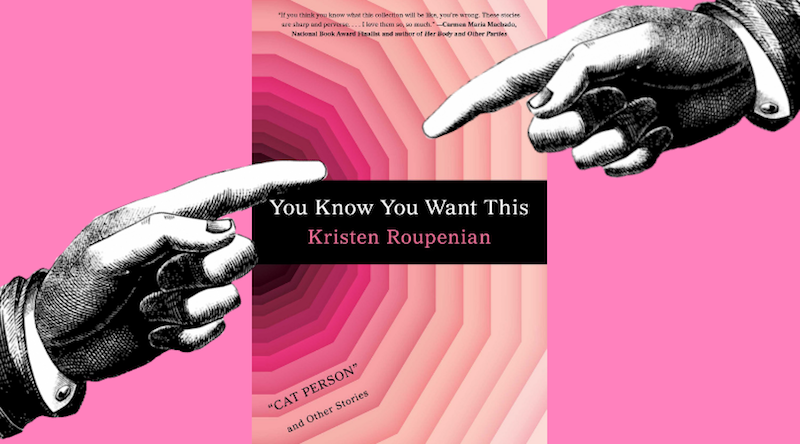 Canny examination of power-as-weakness or dull assemblage of shocks and kinks?

We can think of no more appropriate book to kick off a series like this than Kristen Roupenian’s You Know You Want This. Ever since “Cat Person”—Roupenian’s tale of a young woman’s bad sexual encounter with a schlubby misogynist—became the most-read piece of fiction in the history of the New Yorker website last year, the takes (both derisive and laudatory) have been coming thick and fast. Now, just over a year on, Roupenian is releasing her debut collection and if the early reviews are anything to go by, the reception looks to be similarly divided.

“In the twelve stories in Roupenian’s debut she establishes herself as a raucous and bloodthirsty storyteller who, even when she stumbles, never bores. There are only a few more stories of disastrous dates here; it’s just one part of a larger project about human sadism. More than anything else, You Know You Want This is a sanguinarium of gothic horror … That’s not to say the stories are cookie-cutter, but that they each take a different angle on this particular model of human affairs. Actually, one of the book’s strengths is how diverse its styles and genres are, as it twists the formula of weak versus strong … Although You Know You Want This may be timely in its occasional adjacency to #MeToo, its real canniness comes from apprehending the psychology not only of power, but of power-hunger as, itself, a form of weakness: how people harbor an impulse toward sadistic narcissism, and how little it takes for them to succumb to it … seeing how readers approach Roupenian’s collection will surely say something about us: No matter the book’s merit, maybe we’ll act on the perverse desire to see the much-hyped book tank, flop, or disappoint the standards of literature or feminism, just to feed our sadistic inner critic its blood meal of schadenfreude. That would only redound to Roupenian’s success, because she knows we want this.”

“The 11 other stories collected in You Know You Want This are far more extreme. They lead with caustic opening lines and scenes of gaudy violence. The friendships are treacherous, the mothers more so. The sex might kill you … Pedophilia, necrophilia, child abduction, child murder, mass murder—go down the menu of fears and outré fantasies; they’re all here. And for what? This is a dull, needy book. The desire to seem shocking—as opposed to a curiosity about thresholds physical and ethical—tends to produce provocation of a very plaintive sort … With Roupenian, there is just the giddiness of her imagination, of what she can get away with … I wanted better for these characters—lives with real emotional stakes, actual personalities and not just kinks…characters remain their pathologies; the curtain falls on them before we can ever ask: Now what? There’s none of the simmer of ‘Cat Person’ or its attention to language in the rest of these stories. Roupenian will work a metaphor until it screams … But there might be another chance for this book’s raw material. The collection will be a series on HBO. You Know You Want This has a quarry’s worth of raw suffering; maybe in the adaptation, we won’t be just shocked, but shocked into something—into a kind of understanding or feeling. That’s what I know I want.”