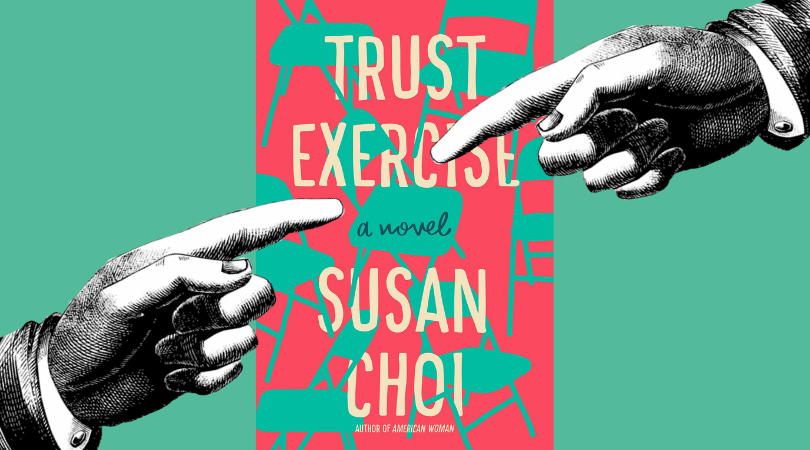 Confusing bait-and-switch or a book to make the taut strings in your chest zing?

This week we’re taking a look at Pulitzer Prize finalist Susan Choi’s fifth novel, Trust Exercise. From the acclaimed author of A Person of Interest and American Woman comes the multi-part story of a performing arts school in the 1980s. It is hard to discuss this novel without ruining the spiral of events the characters fall into, but partway through the narrative, something major shifts, and readers have to reckon with the fact that what they thought was true might not be. For some readers, this twist might be unsuccessful; Elisabeth Egan over at The New York Times Book Review notes the “bait and switch doesn’t feel playful or experimental.” For others, like Dwight Garner of The New York Times, it will mean the book “burns more brightly than anything she’s yet written.”

The intuitive parts of themselves are always highly aggravated when they are together.
Intuition only tells them what they want, not how to achieve it, and this is intolerable.

“…a perplexing novel … We’re chugging along, enjoying Choi’s tart commentary, until the halfway mark, when she fast-forwards a dozen years and the story goes off the rails … Unfortunately, Choi’s bait and switch doesn’t feel playful or experimental. It’s not Gone Girl cleverness or the amusing frustration of an unreliable narrator. It’s total confusion. I had this sense of having followed someone blindly through a warren of circuitous sentences, minus the usual mile markers of chapter breaks, and suddenly being abandoned … In the end, the experience of reading Trust Exercise is reminiscent of the most famous trust exercise of all: the one where you fall backward into your partner’s outstretched arms. You believe your partner will catch you. In this case, she doesn’t.”

“Choi’s new novel, her fifth, is titled Trust Exercise, and it burns more brightly than anything she’s yet written. This psychologically acute novel enlists your heart as well as your mind. Zing will go certain taut strings in your chest … Choi gets the details right: the mix tapes, the perms, the smokers’ courtyards, the ‘Cats’ sweatshirts, the clove cigarettes … Choi takes Sarah and David as seriously as they take themselves. Her writing about their ardor is as vivid and true as anything in Scott Spencer’s great Endless Love … Choi builds her novel carefully, but it is packed with wild moments of grace and fear and abandon. She catches the way certain nights, when you are in high school, seem to last for a month—long enough to sustain entire arcs of one’s life … I do not want to give too much of this transformation away, because I found the temporary estrangement that resulted to be delicious and, in its way, rather delicate … It is a phosphorescent examination of sexual consent, especially when applied to student-teacher relationships. It is also a devastatingly apt analysis of what men have gotten away with.”