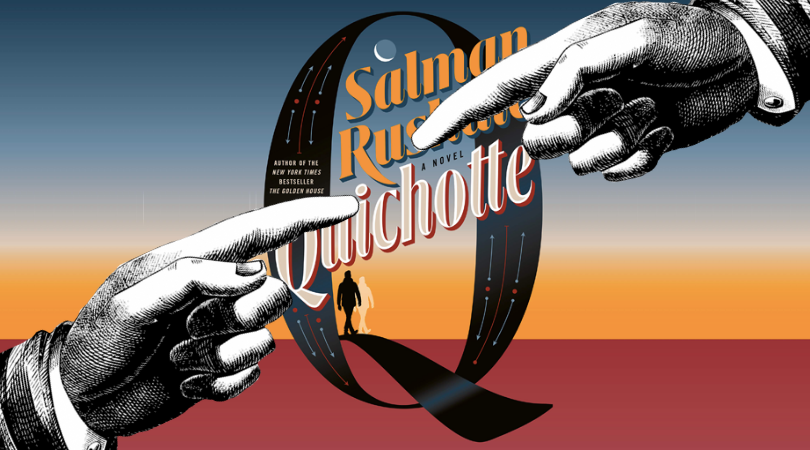 A clever metafictional caper or a brittle pinwheel of parody?

Salman Rushdie is the author of Shame, Midnight’s Children, The Satanic Verses, and many more critically acclaimed novels. Over the course of a  forty-five year career, Rushdie has won the Booker Prize, the Whitbread Prize for Best Novel (twice), the Writers’ Guild Award, and the James Tait Black Prize, among others.

Quichotte is his fourteenth novel. Described as a Don Quixote for the modern day, Quichotte follows Sam DuChamp, a mediocre writer of spy thrillers in the middle of a midlife crisis who creates Quichotte, a salesman who falls in love with a TV star and embarks on an adventure with his (imaginary) son to win her hand.

On the whole, Quichotte has been met with mostly positive reviews. In TIME, Nicholas Mancusi raves about it, saying, “His readers realize that they would happily follow Rushdie to the end of the world, which it turns out they will have to do.” In The New York Times Book Review, Jeanette Winterson deems it “lovely, unsentimental, heart-affirming.” Booklist‘s Donna Seaman thinks Quichotte has done its predecessor justice, saying it’s “an exuberantly imagined and lacerating homage to the revered satire, Don Quixote.” In the other corner, there’s Sukhdev Sandhu in The Guardian (UK) saying “It’s a novel less to be read than to be scrolled through, a seemingly endless feed of gags.” The New York Times‘ Parul Sehgal feels that Salman Rushdie’s novels are getting “increasingly wobbly, bloated and mannered.”

Today we’re focusing on Claire Lowdon’s review in The Sunday Times (UK), which heralds Quichotte as “one of the cleverest, most enjoyable metafictional capers this side of postmodernism” and holding it up against Ron Charles’ review in The Washington Post, which calls the novel “frequently tedious.”

What do you say, reader? Are you willing to embark on this journey with Quichotte? 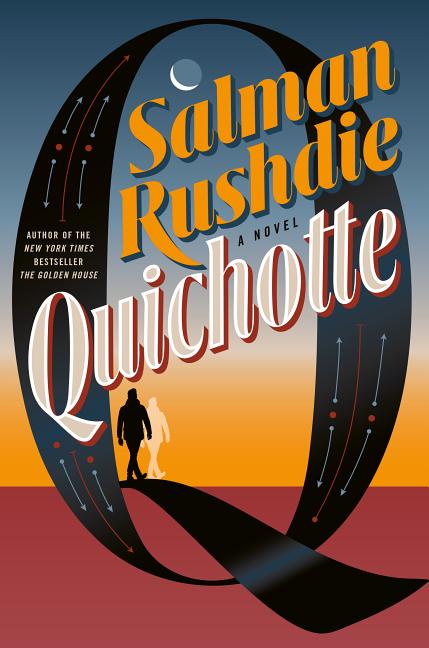 There once lived, at a series of temporary addresses across the United States of America, a traveling man of Indian origin, advancing years, and retreating mental powers, who, on account of his love for mindless television, had spent far too much of his life in the yellow light of tawdry motel rooms watching an excess of it, and had suffered a peculiar form of brain damage as a result.

“Quichotte is one of the cleverest, most enjoyable metafictional capers this side of postmodernism … A glorious 21st-century riff on Cervantes’s 17th century classic Don Quixote … In Quichotte, Rushdie brilliantly demonstrates the way that a writer’s life seeps into their work, sometimes deliberately, sometimes less so … The narration is fleet of foot, always one step ahead of the reader — somewhere between a pinball machine and a three-dimensional game of snakes and ladders … We are a long way from the fertile lyricism of Midnight’s Children, and there is nothing here approaching the death of Changez Chamchawala in The Satanic Verses. But we are still watching a master at work … Rushdie has taken bits of our shared lives, scraps of our language, and constructed a vehicle as wondrous as Chitty Chitty Bang Bang. This novel can fly, it can float, it’s anecdotal, effervescent, charming, and a jolly good story to boot. I almost found myself wishing that it were Rushdie’s last book — because if so, it would be one of literature’s coolest sign offs, as Puckish as Prospero’s final soliloquy. But I don’t think anyone who reads Quichotte will want to release Rushdie from his bonds just yet. Applause, certainly, but also: Encore! Encore!”

“… an alternately cerebral and goofy novel … [a] chronic lack of restraint. Rushdie’s style once unfurled with hypnotic elegance, but here it’s become a fire hose of brainy gags and literary allusions—tremendously clever but frequently tedious … Unfortunately, Quichotte is such a brittle pinwheel of parody that its sharp edges never cut very deep. Much of the novel is a satire of TV stars and by extension the easily manipulated country that adores them. Meanwhile, racism, the opioid crisis, Brexit, gun control, immigration, assisted suicide, corporate fraud, the existence of God, sexual abuse, cyberterrorism—these issues rumble by just as fast as that old Chevy Cruze can drive. Then Jiminy Cricket pops up—yep—and another town is overrun with mastodons. A statue of Hans Christian Andersen talks. Whatever … I barely have the heart to tell you that this modern-day take on Don Quixote is merely a story within another story … Even as its various subplots shamble on, the novel keeps reminding us about the rising conflation of reality and fiction … It would be easier to step over these thematic bricks thrown in our path if the novel’s characters offered any emotional substance, but by design they’re just constructs in this literary game. And so we die-hard fans of Salman Rushdie keep turning the pages, hoping for a reward commensurate to the journey.”

Still curious? Read an excerpt over on Lit Hub.