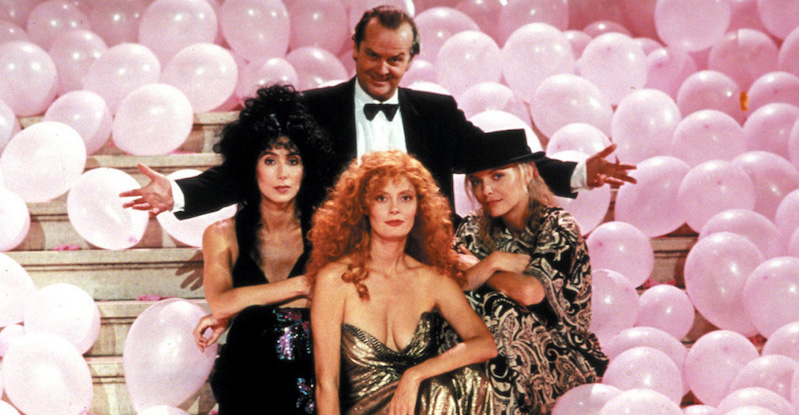 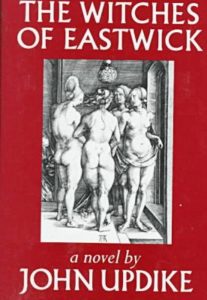 Wickedness was like food: once you got started it was hard to stop;

the gut expanded to take in more and more.

“The Witches of Eastwick is John Updike’s first novel since the much-celebrated Rabbit Is Rich, and a strange and marvelous organism it proves to be. Like his third novel, The Centaur, it is a departure from baroque realism.

Mr. Updike’s titles are often quite literal, and The Witches of Eastwick is just what it says. It’s indeed about witches, real ones, who can fly through the air, levitate, hex people and make love charms that work, and they live in a town called Eastwick. It’s Eastwick rather than Westwick, since, as we all know, it’s the east wind that blows no good. Eastwick purports to be in Rhode Island because, as the book itself points out, Rhode Island was the place of exile for Anne Hutchinson, the Puritan foremother who was kicked out of the Massachusetts Bay colony by the forefathers for female insubordination, a quality these witches have in surplus.

These are not 1980’s Womanpower witches. They aren’t at all interested in healing the earth, communing with the Great Goddess, or gaining Power-within (as opposed to Power-over). These are bad Witches, and Power-within, as far as they are concerned, is no good at all unless you can zap somebody with it. They are spiritual descendants of the 17th-century New England strain and go in for sabbats, sticking pins in wax images, kissing the Devil’s backside and phallus worship; this latter though—since it is Updike—is qualified worship. The Great Goddess is present only in the form of Nature itself, or, in this book, Nature herself, with which they, both as women and as witches, are supposed to have special affinities. Nature, however, is far from Wordsworth’s big motherly breast. She, or it, is red in tooth, claw and cancer cell, at best lovely and cruel, at worst merely cruel. ‘Nature kills constantly, and we call her beautiful.’ 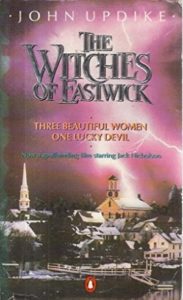 “How did these middle-class, small-town, otherwise ordinary women get their witchy powers? Simple. They became husbandless. All three are divorcees and embodiments of what American small-town society tends to think about divorcees. Whether you leave your husband or are left ‘doesn’t make any difference,’ which will be news to many abandoned women stuck with full child support. Divorced then, and, with the images of their former husbands shrunk and dried and stored away in their minds and kitchens and cellars, they are free to be themselves, an activity Mr. Updike regards with some misgivings, as he regards most catchwords and psychofads.

Being yourself involves artistic activity, albeit of minor kinds. Lexa makes ceramic earthmothers, which are sold in the local crafts store, Jane plays the cello, and Sukie writes, badly, a gossip column for the weekly paper, her participles dangling like earrings. All three are dabblers, but their ‘creativity’ is seen in the same light as that of other, more accomplished female artists. The townspeople of Eastwick, who act as a collective chorus, credit them with ‘a certain distinction, an inner boiling such as had in other cloistral towns produced Emily Dickinson’s verses and Emily Bronte’s inspired novel.’

It’s doubtful, however, that either of the Emilys went in for the sexual loop-the-loops indulged in by these three weird sisters. Sisters in more senses than one because the novel is cunningly set at a precise moment in America’s recent history. The women’s movement has been around just long enough for some of its phrases to have seeped from New York to the outer darkness of provincial towns like Eastwick, and the witches toss around words like ‘chauvinist’ in light social repartee. In the public, male world, which is offstage, the Vietnam War goes on, watched by the witches’ children on their television sets, and the antiwar activists are making bombs in cellars. 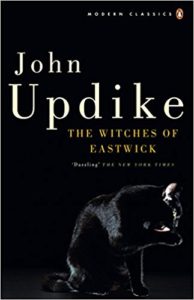 “The witches don’t busy themselves with ’causes,’ however. At first, they are merely restless and bored; they amuse themselves with spiteful gossip, playing mischievous tricks and seducing unhappily married men, which Eastwick supplies in strength; for if the witches are bad, the wives are worse, and the men are eviscerated. ‘Marriage,’ one of the husbands thinks, ‘is like two people locked up with one lesson to read, over and over, until the words become madness.’

But enter the Devil, the world’s best remedy for women’s boredom, in the form of the dark, not very handsome but definitely mysterious stranger Darryl Van Horne, who collects pop art and has an obvious name. Now mischief turns to maleficio, real evil occurs and people die, because Van Horne’s horn becomes a bone of contention—nothing like not enough men to go around to get the witches’ cauldrons bubbling. And when Van Horne is snatched into marriage by a newcomer witchlet, the eye of newt comes out in earnest.

This may sound like an unpromising framework for a serious novelist. Has Mr. Updike entered second childhood and reverted to Rosemary’s babyland? I don’t think so. For one thing, The Witches of Eastwick is too well done. Like Van Horne, Mr. Updike has always wondered what it would be like to be a woman, and his witches give him a lot of scope for this fantasy. Lexa in particular, who is the oldest, the plumpest, the kindest and the closest to Nature, is a fitting vehicle for some of his most breathtaking similes. In line of descent, he is perhaps closer than any other living American writer to the Puritan view of Nature as a lexicon written by God, but in hieroglyphs, so that unending translation is needed. Mr. Updike’s prose, here more than ever, is a welter of suggestive metaphors and cross-references, which constantly point toward a meaning constantly evasive.

His version of witchcraft is closely tied to both carnality and mortality. Magic is hope in the face of inevitable decay. The houses and the furniture molder, and so do the people. The portrait of Felicia Gabriel, victim wife and degenerate after-image of the one-time ‘peppy’ American cheerleading sweetheart, is gruesomely convincing. Bodies are described in loving detail, down to the last tuft, wart, wrinkle and bit of food stuck in the teeth. No one is better than Mr. Updike at conveying the sadness of the sexual, the melancholy of motel affairs—’amiable human awkwardness,’ Lexa calls it. This is a book that redefines magic realism. 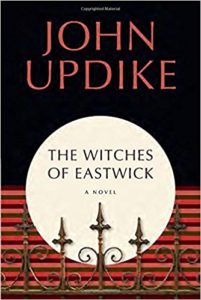 “There’s room too for bravura writing. The widdershins dance, portrayed as a tennis game in which the ball turns into a bat, followed by the sabbat as a hot-tub-and-pot session, is particularly fetching. Students of traditional Devil-lore will have as much fun with these transpositions as Mr. Updike had. Van Horne, for instance, is part Mephistopheles, offering Faustian pacts and lusting for souls, part alchemist-chemist, and part Miltonic Satan, hollow at the core; but he’s also a shambling klutz whose favorite comic book is—what else?—Captain Marvel.

Much of The Witches of Eastwick is satire, some of it literary playfulness and some plain bitchery. It could be that any attempt to analyze further would be like taking an elephant gun to a puff pastry: An Updike should not mean but be. But again, I don’t think so. What a culture has to say about witchcraft, whether in jest or in earnest, has a lot to do with its views of sexuality and power, and especially with the apportioning of powers between the sexes. The witches were burned not because they were pitied but because they were feared.

Cotton Mather and Nathaniel Hawthorne aside, the great American witchcraft classic is The Wizard of Oz, and Mr. Updike’s book reads like a rewrite. In the original, a good little girl and her familiar, accompanied by three amputated males, one sans brain, one sans heart and one sans guts, go seeking a wizard who turns out to be a charlatan. The witches in Oz really have superhuman powers, but the male figures do not. Mr. Updike’s Land of Oz is the real America, but the men in it need a lot more than self-confidence; there’s no Glinda the Good, and the Dorothy-like ingenue is a ‘wimp’ who gets her comeuppance. It’s the three witches of Eastwick who go back, in the end, to the equivalent of Kansas—marriage, flat and gray maybe, but at least known. 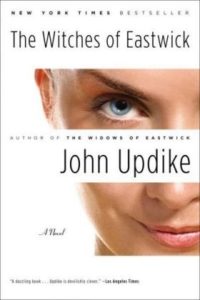 “The Witches of Eastwick could be and probably will be interpreted as just another episode in the long-running American serial called ‘Blaming Mom.’ The Woman-as-Nature-as-magic-as-powerful-as-bad-Mom package has gone the rounds before, sometimes accompanied by the smell of burning. If prattle of witchcraft is heard in the land, can the hunt be far behind? Mr. Updike provides no blameless way of being female. Hackles will rise, the word ‘backlash’ will be spoken; but anyone speaking it should look at the men in this book, who, while proclaiming their individual emptiness, are collectively, offstage, blowing up Vietnam. That’s male magic. Men, say the witches, more than once, are full of rage because they can’t make babies, and even male babies have at their center ‘that aggressive vacuum.’ Shazam indeed!”