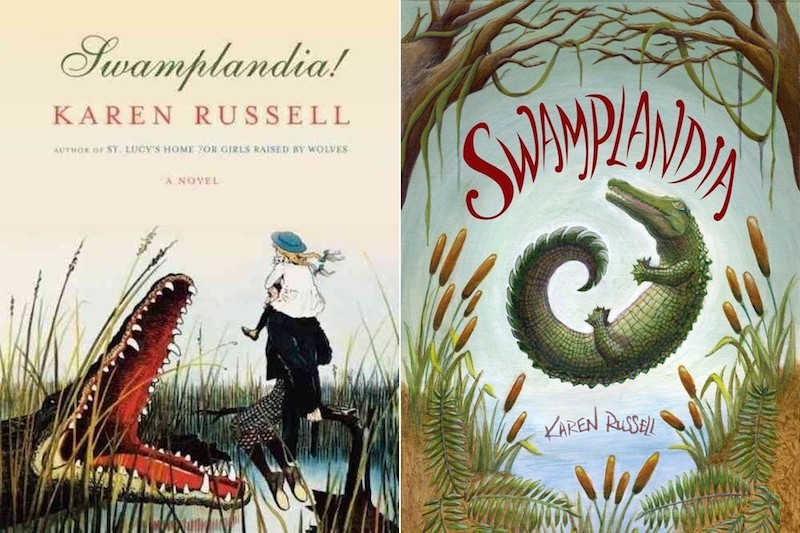 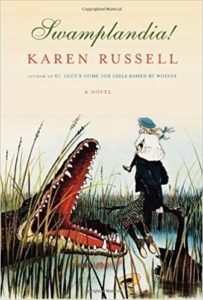 When you are a kid, you don’t know yet that a secret, like an animal, can evolve. Like an animal, a secret can develop a self-preserving intelligence. Shaglike, mute and thick, a knowledge with a fur: your secret.

“I’ll admit it: I’m a sucker for the outrageously exuberant first novel. I love the joy in the prose, the feeling that the writer has thrown the whole circus of her heart onto the page, safety nets be damned.

Karen Russell’s Swamplandia! is one such first novel. 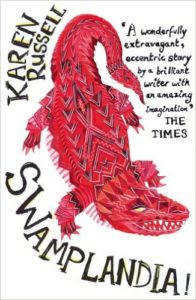 “Russell has deep and true talents: Ava is a fabulous narrator, loyal, brave and loving, and by this point, the book seems to be developing into an offbeat version of the Orpheus and Eurydice myth. As a state, Florida is so very odd that mere close observation can show it in its full weird glory, but the power of Russell’s prose makes the swamp unforgettably visceral.

When Ava and her birdly guide come upon an abandoned settlement called Stiltsville, Russell writes, with marvelous exactitude: ‘Each house had a shadow beneath it, a sort of liquid basement. Small waves rose midway up the platform supports and collapsed into a thin foam. The temperature dropped tens of degrees whenever we poled beneath a house. Above us, the rotted planks and greenish white crossboards looked like they’d been nailed shut by some lunatic carpenter – I saw the glint of what seemed at a distance to be hundreds and hundreds of nailheads. Barnacles. Not nails but shells, dark red horns spiraling out of every surface.’

For as lovingly written as the book is, however, it is also erratically structured, shaped more like a banjo than the jagged Freytag’s pyramid used to demonstrate arc in beginning fiction classes. 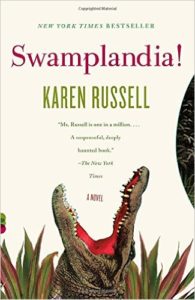 “As a balanced and self-contained work of art, Swamplandia! may not live up to its own ambitions, especially when the signs of a struggle for meaning weigh down the middle pages, or when something terrible happens to Ava that seems less inevitable than selected by the author for its sheer sickening badness. But as a manifestation of Russell’s brilliant descriptions, characterizations and, most of all, voice, the book works wonderfully. Russell is the kind of storyteller whose charm blinds and hypnotizes the reader into believing – and loving – every word she writes even at the same time that you recognize the flaws in the whole.

The greatest pleasure for a reader is sometimes the feeling that one is a wee homunculus perching in the author’s head, marveling at the world made strange by her eyes. In Russell’s oeuvre of lost and wounded girls, the humor and sharpness of her prose cover a kind of plangent nostalgia; and it’s the vibration between the two elements that paints her world weird.

If given a choice between an inconsistent but passionate book like Swamplandia! and a more perfect and self-serious effort, I’d choose passion, the tightrope walk, the fearsome alligator wrestle. And I will read whatever Karen Russell writes in the future, for the sheer pleasure of being allowed a seat in her inventive and teeming brain.”