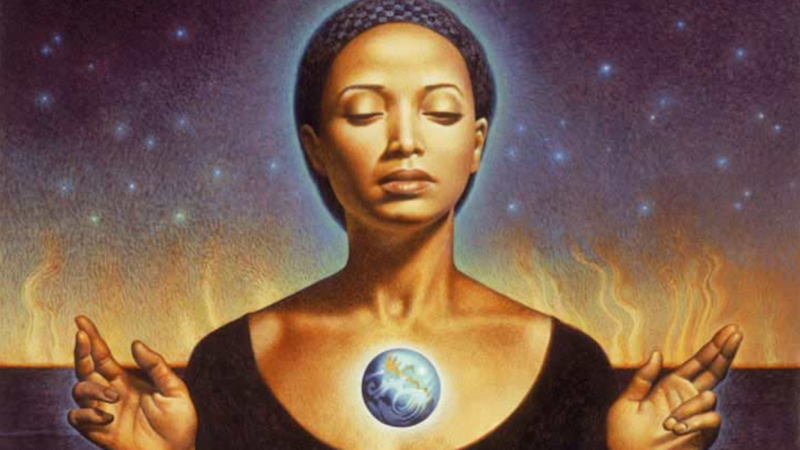 On Octavia Butler's Parable of the Sower

"The world is full of painful stories. Sometimes it seems as though there aren't any other kind"

Octavia E. Butler, beloved Sci-Fi titan and Afrofurturism pioneer, died on this day in 2006. Thirteen years previous she had published perhaps her most iconic (and certainly most eerily prescient) novel: Parable of the Sower.

Set in 2024 in an America ravaged by climate change, wealth inequality, and corporate greed, the novel tells the story of a young Black “hyperempath” named Lauren Oya Olamina who develops a new belief system which she comes to call Earthseed. Earthseed, Lauren believes, will prepare mankind for its destiny: to leave earth behind and live in peace on other planets. When Lauren’s Los Angeles home is destroyed and her family murdered, she travels north with a band of followers, navigating the chaos and racial violence of a fallen world, to found the first Earthseed colony.

After a twenty-seven year delay, Parable of the Sower finally took its rightful place on the New York Times Best Seller list in September of last year.

Today, in memory of Butler and her vision, we look back on one of the earliest reviews of this seminal work of dystopian literature. 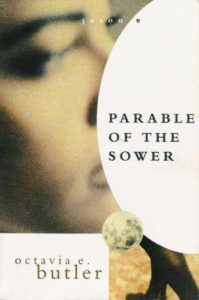 The child in each of us
Knows paradise.
Paradise is home.
Home as it was
Or home as it should have been.

Paradise is one’s own place,
One’s own people,
One’s own world,
Knowing and known,
Perhaps even
Loving and loved.

Yet every child
Is cast from paradise-
Into growth and new community,
Into vast, ongoing
Change.

“As the millennium approaches, the collapse of civilization as we know it has become an increasingly popular subgenre in science fiction. The collapse, which only a few years ago was typically triggered by nuclear war, is now more likely to be blamed on environmental or political mismanagement. Such stories tend to focus on what happens after the old social order falls apart; the ensuing chaos offers a heady freedom that tempts many writers to make up their own rules as they go along. In her fine new novel, Parable Of The Sower, Octavia E. Butler accepts a more difficult challenge: poising her story on the brink of change, she tries to imagine a new social order at its moment of conception.

The opening chapters, set in southern California in the year 2024, depict a society that has continued to unravel from our own day but that nevertheless remains recognizable. The middle-income community where 15-year-old Lauren Oya Olamina and her family live has a high wall around it; the price that water peddlers charge to street people has gone up again; there’s a new drug called pyro that prompts addicts to get their kicks by setting fires. But daily life by and large follows familiar grooves, and it takes an especially keen eye to see the great disaster looming. 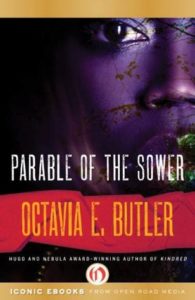 “Lauren, the daughter of a Baptist minister, is a seer. She suffers from a condition called ‘hyper empathy’ in which she experiences other people’s pleasure and pain as her own; even her relatively sheltered childhood has taught her to expect more pain than pleasure. By inviting us to look over Lauren’s shoulder as she writes the diary entries that constitute the text of the novel, Ms. Butler slyly implicates us in the terrible events that follow: the death of Lauren’s father, the torching of her neighborhood and her flight north, accompanied by a band of survivors who at first huddle together for mutual protection and only gradually unite around Lauren’s vision of a better world.

This vision is unabashedly religious. Lauren turns out to be a prophet, birthing a new faith that speaks to her dislocated times. Religious awakenings are nothing unusual in modern science fiction, whose practitioners have a weakness for deus ex machina. But as conjured by science fiction, most futuristic religions seem little more than arbitrary conventions imposed on the characters for the sake of the narrative. Ms. Butler dares to take Lauren’s revelations seriously, showing how, despite their origin in personal experience, they appeal to her followers on several levels simultaneously—the intellect, the emotions and, most important, the will. 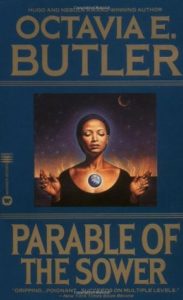 “As a novel, The Parable of the Sower also succeeds on multiple levels. A gripping tale of survival and a poignant account of growing up sane in a disintegrating world, it is at bottom a subtle and disturbing exposition of the gospel according to Lauren: ‘The only lasting truth is Change. God is Change.'”