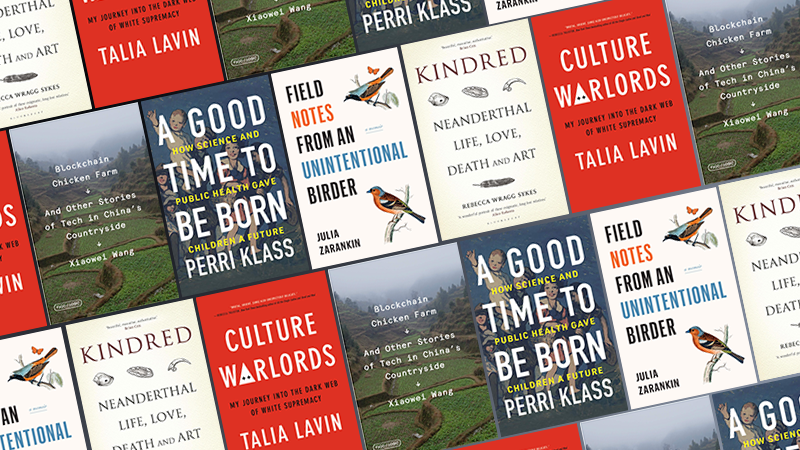 “If your ancestry traces back to populations outside sub-Saharan Africa, there’s a good chance that your genome includes contributions from Neanderthals. In Kindred: Neanderthal Life, Love, Death and Art, archaeologist and science writer Rebecca Wragg Sykes explains in splendidly engaging prose why this fact is cause for wonder and celebration … Occasionally the writing bogs down in details overly numerous and technical for a wide readership … Make no mistake, though. What Wragg Sykes has produced in Kindred, after eight years of labor, is masterful. Synthesizing over a century and a half of research, she gives us a vivid feel for a past in which we weren’t the only smart, feeling bipedal primate alive. That feel comes across sometimes in startlingly fresh ways.”

2. Culture Warlords: My Journey Into the Dark Web of White Supremacy by Talia Lavin
(Hachette)

“Lavin does not lack sympathy for the loneliness of incels, for instance. But she does more than most anti-extremists to connect the present fascist right to its predecessors as part of long histories of racism, antisemitism, misogyny, and fascist organizing in this country … Though Lavin’s book may lack policy recommendations, her work contains the truth that the fight against emerging fascism is a mass political struggle, not a technical problem for experts to solve. Not everyone can punch Nazis, or dox them. Indeed, recent events have made clear that many of the upholders of white supremacy will not come to us in the reassuringly exotic form of the neo-Nazi. They will arise from the ranks of quotidian supporters of the structures of white supremacy, such as that of the police. It’s going to take much more than guidance programs for the youth and enhanced surveillance to counter the rising tide of the far right.”

3. Blockchain Chicken Farm: And Other Stories of Tech in China’s Countryside by Xiaowei Wang
(FSG Originals)

“…fascinating … It’s a weird, delightful and unsettling tableau. In Blockchain Chicken Farm Wang introduces us to dozens of such quixotic figures, hopscotching across the country on a mission: to document how technology is transforming the lives of China’s rural poor … Wang has a keen eye for the steampunk-like details of ancient rural areas now shot through with internet opportunity … Wang has written a nuanced and thought-provoking account.”

4. A Good Time to Be Born: How Science and Public Health Gave Children a Future by Perri Klass
(W. W. Norton & Company)

“Klass brings exceptional and compassionate writing skills to an exploration of the hazards of early life, using stories of both rich and poor families before the 20th century to show how precarious children’s lives were at that time … The author provides insight into the importance of vaccinations and health checks along with touching upon vital subjects such as child rearing, child safety seats, breastfeeding, and other concerns of childhood that have seen changes over time … Klass masterfully introduces readers to the people coming up with solutions for many of the dangers of childhood and shows how the pediatric specialty over time has worked to improve children’s lives. Essential reading for parents.”

5. Field Notes From an Unintentional Birder by Julia Zarankin
(Douglas and McIntyre)

Read an excerpt from Field Notes From an Unintentional Birder here

“This sense of wonder in the ordinary permeates Field Notes From an Unintentional Birder, a thoughtful, engaging and sometimes humorous memoir that documents Zarankin’s evolution from shy novice birder to confident expert … Her bird descriptions are witty and apt.”