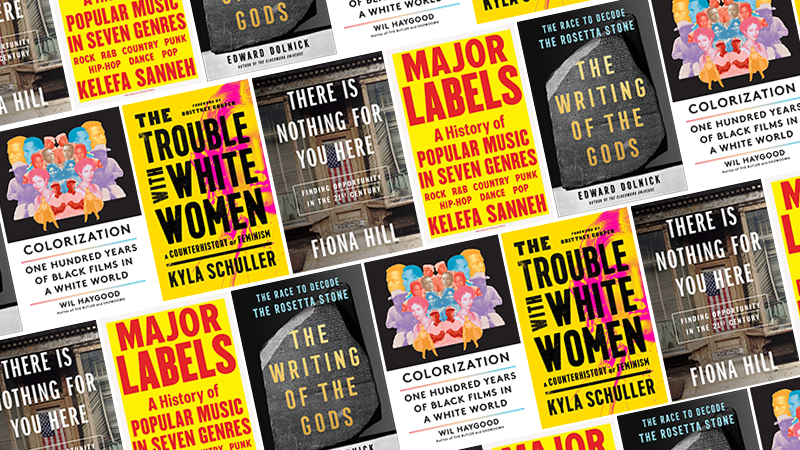 Featuring a history of pop music, a chronicle of black filmmaking, a counterhistory of feminism, and more

Kelefa Sanneh’s Major Labels, Fiona Hill’s There is Nothing Here for You, Edward Dolnick’s The Writing of the Gods, Wil Haywood’s Colorization, and Kyla Schuller’s The Trouble With White Women all feature among the best reviewed history and politics books of the month.

“Mr. Sanneh, a staff writer for the New Yorker, gets high marks both for his encyclopedic knowledge and his breadth of taste. He also writes like an angel, making Major Labels one of the best books of its kind in decades … Mr. Sanneh is rightly skeptical of art that operates within a deliberately ‘cramped range’ that limits its ability to be ‘rowdy and messy.’ This sentiment is as close as this remarkably judgment-free writer comes to an overall aesthetic principle: that the only thing music has to do is be exciting … His book succeeds for many reasons, one of which is that each encyclopedic chapter is divided into 10 or a dozen sections, each with its own subtitle: Bite-size chunks, as it were, are the only workable format for this feast. Mr. Sanneh also has a gift for zingers.”

2. There Is Nothing for You Here: Finding Opportunity in the Twenty-First Century by Fiona Hill
(Mariner)

“… a valuable and riveting historic document … Hill’s personal, professional and political lives form a coherent whole so that each part illuminates the other … For the British reader, Hill’s memoir makes for sobering, sometimes shaming, reading. Without self-pity, she makes it very clear that her background imposed huge disadvantages on her … The last part of her book is a passionate argument for the removal of the structural disadvantages that hold back the poor in Britain and the US. When I finished…I was left with one remaining mystery. Why did she do it? Many of Hill’s friends in Washington would have warned her against working for Trump … On this, Hill is frustratingly taciturn … a memoir that will give pleasure to readers today—and will be an important document for historians of the future.”

3. The Writing of the Gods: The Race to Decode the Rosetta Stone by Edward Dolnick
(Scribner)

“… engrossing … Dolnick here conjures up another intricate intellectual caper. With its thrilling dissection of the decoding process, it calls to mind Margalit Fox’s The Riddle of the Labyrinth: The Quest to Crack an Ancient Code (2013), about three scholars who deciphered Linear B, the 3,400-year-old script excavated from the ruins of Crete’s Minoan civilization. Like Fox, Dolnick exuberantly captures the frustrations and triumphs of scholars as they puzzle out the meaning of long-dead runes, ‘seduced by tantalizing clues and then careening into dead ends and losing hope, but then spotting new markers and dashing off jubilantly once more’ … Dolnick’s stirring account makes it clear that both decoders deserve scholarly immortality.” 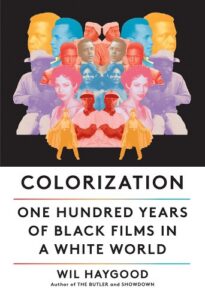 =4. Colorization: One Hundred Years of Black Films in a White World by Wil Haygood
(Knopf)

“.. elegant and well-made … Some prolific nonfiction writers slowly grow bleary; you sense them, in their later books, going through the motions, rounding off corners. Haygood, on the other hand, has become a master craftsman, one whose joinery is seamless … This is sweeping history, but in Haygood’s hands it feels crisp, urgent and pared down. He doesn’t try to be encyclopedic. He takes a story he needs, tells it well, and ties it to the next one. He carries you along on dispassionate analysis and often novelistic detail … As you read, you may find yourself making lists of films to watch or rewatch … Stale language begins to creep in toward the end. It’s past time for an ambitious young copy editor to invent a search widget called ClicheCatcher™ to routinely run on manuscripts before they go to press … Yet this is important, spirited popular history. Like a good movie, it pops from the start. (Haygood was wise to omit an introduction.) Like a good movie, too, it comes full circle.”

=4. The Trouble with White Women: A Counterhistory of Feminism by Kyla Schuller
(Bold Type Books)

“Schuller…lays bare how white feminism, rooted in binary, dated understandings of womanhood…’is a political position, not an identity,’ and has no interest in disrupting the status quo, or in a reallocation of power … The most adept historian is one who can transform carefully mined nuggets of archival material into compelling, if not piquant, prose. Schuller is a gifted storyteller, her counterhistory equal parts writerly craft and scholarly diligence … Schuller’s writing is strongest when locating the precise historical moments in which these feminist figures intersected … Schuller takes care to render these women not as heroes and villains, but as studies in complexity, contradiction and nuance. Sometimes, though, the balance between the two subjects can feel off … However, when Schuller does strike the right balance, as she does between the anti-trans feminist Janice Raymond and the trans theorist Sandy Stone, the result is mesmerizing. The Trouble With White Women is a welcome addition to the feminist canon. Undertaking the kind of critical labor necessary for engendering a truly liberatory feminism, Kyla Schuller is doing the work.”