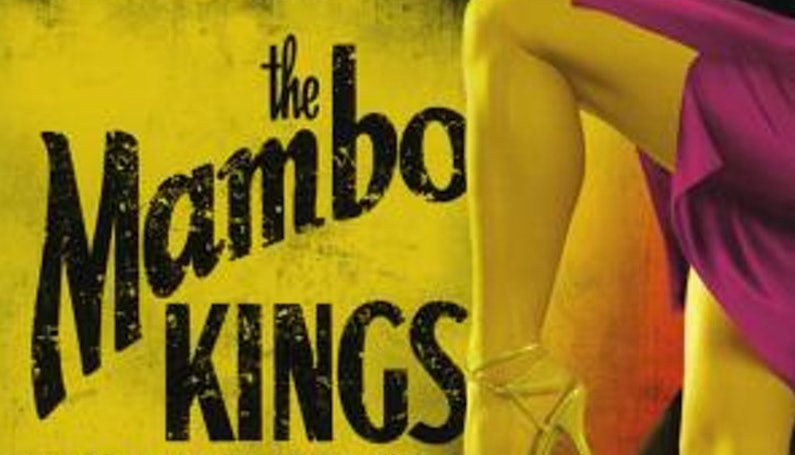 Margo Jefferson on The Mambo Kings Play Songs of Love 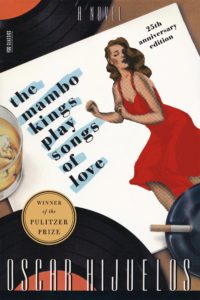 …a world of pure affection, before torment, before loss, before awareness

“No narrator is more ruthless, more full of longing, than a child out to understand what his parents were like before he entered their lives. This mystery deepens when the parents grew up in another land, like Cuba, then immigrated to America, where their inevitably watchful and complicated children were born. The title of Oscar Hijuelos’ rich and sorrowful first novel sums it up. Our House in the Last World is the elegant Havana mansion of a mother whose talents have turned to crazed eccentricities; the lost hope of a father who surely wanted to be more than a cook at a New York hotel; the house of a culture that one can wander through, luxuriate in at will, free from the harsh and wary eyes of strangers.

The Mambo Kings Play Songs of Love follows a family and a culture from one world to the next in the form of several generations of Latin music. The habanera, the rumba, the son—all made their way from Cuba to America, to be translated, truncated and elaborated for Yankee and Latin-immigrant ears and feet. Where the music went the musicians followed, and so in 1949 Cesar and Nestor Castillo (just two of many) came to New York City, on the heels and the beat of the rumba’s intricate, exuberant successor, the mambo.

What did they hope for, the dashing, extravagant Cesar, singing to break the heart and stir the blood, and frail, melancholy Nestor, composing 22 versions of ‘Beautiful Maria of My Soul,’ his courtly tribute to a woman he knew briefly in Cuba and will long for to the end of his days in America? Whose success could they emulate? There was Machito, with his bravura Afro-Cuban band. There was that glamorous crooner Miguelito Valdez, helping Xavier Cugat promote his belief that Americans wanted Latin dance music that appealed more to the eye than to the ear. Most of all, there was Desiderio Arnaz, who had once worked with the same orchestra as Cesar. ‘He had turned up in the States in the thirties and established himself in the clubs and dance halls of New York as a nice, decent fellow and had parlayed his conga drum, singing voice, and quaint Cuban accent into fame. . . . That Cesar was white like Arnaz (though to some Americans he would be “a Spic”) and had a good quivering baritone and blunt pretty-boy looks all seemed destined to work to his advantage.’ 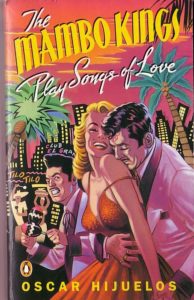 “And for a time, destiny works as it should. Cesar and Nestor establish their own orchestra, the Mambo Kings, and put out records—brittle plastic 78’s that sell for 69 cents apiece and feature a Miss Mambo pinup girl on each cover. They record songs like ‘My Cuban Mambo,’ ‘The Subway Mambo,’ ‘Twilight in Havana,’ ‘Conga Cats and Conga Dolls,’ ‘Mambo Inferno!’ and ‘The Sadness of Love.’ They play to cheering audiences on the East Coast and tour the country in flamingo pink and black suits, generally thrilling the natives but occasionally, just occasionally finding excrement rubbed on the windows of their flamingo pink bus.

In 1955 they have their moment in the bright sun of pop America. Desi Arnaz spots them performing in a New York club one night and invites them to appear on I Love Lucy, playing his cousins. It’s a lovely moment as described by Nestor’s son, Eugenio, who never tires of watching the reruns. There is a gentle rap on Lucy’s stage set door. She calls out, ‘I’m commmmmming,’ in her dotty housewife way, and there, standing in her doorway, are two men ‘in white silk suits and butterfly-looking lace bow ties, black instrument cases by their side and black-brimmed white hats in their hands.’ The scene shifts to Ricky Ricardo’s show at the Tropicana Club. The brothers enter; Cesar strums his guitar; Nestor lifts his trumpet, and with Desiderio harmonizing they perform their languorous and mournful bolero, ‘Beautiful Maria of My Soul.’ When the song ends, Desi whips up his hand and shouts, ‘Ole!’ The brothers bow, acknowledging the applause, then they exit from the set and from the lives of Mr. and Mrs. America.

But they have just entered ours. In this near-mystic moment, Eugenio sees his dead father and his aging, dying uncle resurrected—young, fresh and flush with what they do and love best. That the world sees them too thrills him, but one of the best things about this novel is the fact that it doesn’t center on the Castillos’ longing to cross over into the American dream; it leads us across into their dreams instead. 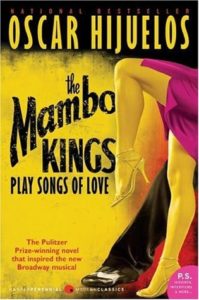 “Mr. Hijuelos notes and orchestrates the lives of the Castillos, their friends and their families with multiple emotional rhythms. Garrulous, florid Cesar, filled with both kindness and cock-of-the-walk macho; Nestor, growing more and more withdrawn each year, trying to fortify himself with daily readings of a Dale Carnegie-like book called Forward America!; Delores, Nestor’s wife, serious, dreamily ambitious, yearning to go to college; women and men who work as maids, clerks, janitors or butchers by day and fill the ballrooms at night, their manners a gorgeously inflected blend of formality and abandon.

The novel alternates crisp narrative with opulent musings—the language of everyday and the language of longing. When Mr. Hijuelos falters, as from time to time he does, it’s through an excess of self-consciousness: he strives too hard for all-encompassing description or grows distant and dutiful in an effort to get period details just right. Still and all, you finish feeling as Cesar’s first music teacher in Cuba told him audiences should feel when a song ends—ready to throw up your arms and cry, ‘Que bueno es!’ Mr. Hijuelos is writing music of the heart, not the heart of flesh and blood that stops beating, ‘but this other heart filled with light and music . . . a world of pure affection, before torment, before loss, before awareness.'”