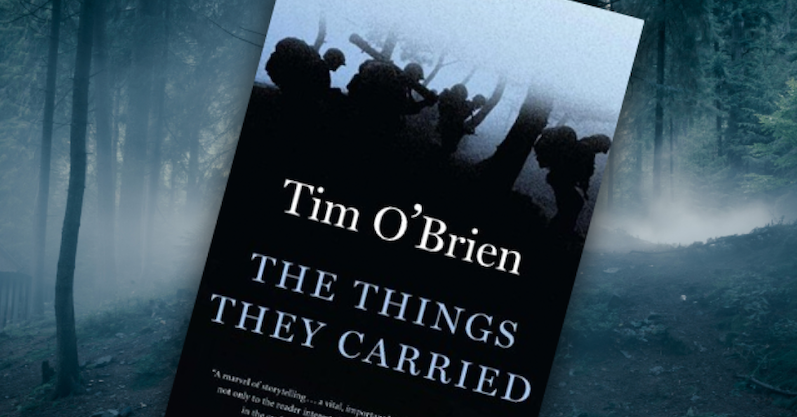 Men Killed, and Died, Because They Were Embarrassed Not To

A 1990 New York Times review of Tim O'Brien's harrowing short story collection of the Vietnam War, The Things They Carried 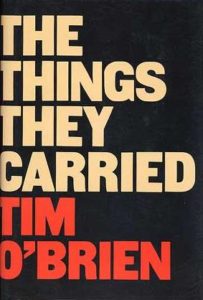 They carried all they could bear, and then some,
including a silent awe for the terrible power of the things they carried.

“Only a handful of novels and short stories have managed to clarify, in any lasting way, the meaning of the war in Vietnam for America and for the soldiers who served there. With The Things They Carried, Tim O’Brien adds his second title to the short list of essential fiction about Vietnam. As he did in his novel Going After Cacciato (1978), which won a National Book Award, he captures the war’s pulsating rhythms and nerve-racking dangers. But he goes much further. By moving beyond the horror of the fighting to examine with sensitivity and insight the nature of courage and fear, by questioning the role that imagination plays in helping to form our memories and our own versions of truth, he places The Things They Carried high up on the list of best fiction about any war.

The Things They Carried is a collection of interrelated stories. A few are unremittingly brutal; a couple are flawed two-page sketches. The publisher calls the book ‘a work of fiction,’ but in no real sense can it be considered a novel. No matter. The stories cohere. All deal with a single platoon, one of whose members is a character named Tim O’Brien. Some stories are about the wartime experiences of this small group of grunts. Others are about a 43-year-old writer—again, the fictional character Tim O’Brien—remembering his platoon’s experiences and writing war stories (and remembering writing stories) about them. This is the kind of writing about writing that makes Tom Wolfe grumble. It should not stop you from savoring a stunning performance. The overall effect of these original tales is devastating. 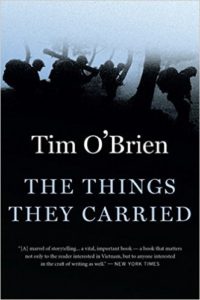 “In the title story, Mr. O’Brien juxtaposes the mundane and the deadly items that soldiers carry into battle. Can openers, pocketknives, wristwatches, mosquito repellent, chewing gum, candy, cigarettes, salt tablets, packets of Kool-Aid, matches, sewing kits, C rations are ‘humped’ by the G.I.’s along with M-16 assault rifles, M-60 machine guns, M-79 grenade launchers. But the story is really about the other things the soldiers ‘carry’: ‘grief, terror, love, longing . . . shameful memories’ and, what unifies all the stories, ‘the common secret of cowardice.’ These young men, Mr. O’Brien tells us, ‘carried the soldier’s greatest fear, which was the fear of blushing. Men killed, and died, because they were embarrassed not to.’

“Are these simply tricks in the service of making good stories? Hardly. Mr. O’Brien strives to get beyond literal descriptions of what these men went through and what they felt. He makes sense of the unreality of the war—makes sense of why he has distorted that unreality even further in his fiction—by turning back to explore the workings of the imagination, by probing his memory of the terror and fearlessly confronting the way he has dealt with it as both soldier and fiction writer. In doing all this, he not only crystallizes the Vietnam experience for us, he exposes the nature of all war stories 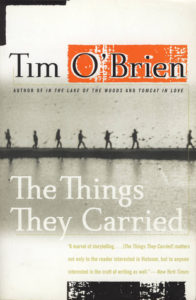 “Is it fair to readers for Mr. O’Brien to have blurred his own identity as storyteller-soldier in these stories? ‘A true war story is never moral,’ he writes in ‘How to Tell a True War Story.’ ‘It does not instruct, nor encourage virtue, nor suggest models of proper human behavior, nor restrain men from doing the things men have always done. If a story seems moral, do not believe it. If at the end of a war story you feel uplifted, or if you feel that some small bit of rectitude has been salvaged from the larger waste, then you have been made the victim of a very old and terrible lie. There is no rectitude whatsoever. There is no virtue. As a first rule of thumb, therefore, you can tell a true war story by its absolute and uncompromising allegiance to obscenity and evil.’ Mr. O’Brien cuts to the heart of writing about war. And by subjecting his memory and imagination to such harsh scrutiny, he seems to have reached a reconciliation, to have made his peace—or to have made up his peace.”