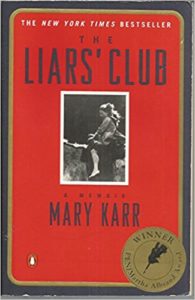 Sure the world breeds monsters, but kindness grows just as wild…

“The title of the poet Mary Karr’s extraordinary new memoir is taken from the name that came to be attached to the informal club formed by her father and his drinking buddies in a small Texas town in the early 60’s. Days and nights they weren’t working at the oil refinery or the chemical plant and could get away from their wives, they gathered at the American Legion Hall or in the back room at the local bait shop to play dominoes and tell and retell stories. Her father, says Ms. Karr, who used to tag along, told the best stories of all: stories he acted out with his consummate gift of mimicry, stories filled with unforgettable characters and terrible drama, stories that would haunt his young daughter for the rest of her life.

Ms. Karr inherited her father’s remarkable gift for storytelling, and she has used that gift to create one of the most dazzling and moving memoirs to come along in years.

Most of The Liars’ Club takes place in 1962 and ’63, when Ms. Karr was 7 and 8, but the book also moves backward and forward in time, unfolding like some magical origami flower to give the reader an indelible portrait of an entire family and an entire world. 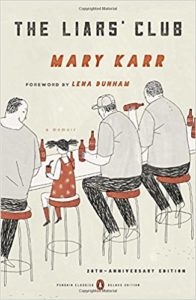 “[Leechfield, East Texas] was a landscape of extremes, a place plagued by locusts and snakes, and buffeted by hurricanes and tornadoes, a place once voted by Business Week as one of the 10 ugliest towns on the planet. When Ms. Karr left home at 15, she writes, no one organized ‘any posse to sniff me down.’ She says, ‘They just figured that wherever I was headed, it must be better than Leechfield.’

“Ms. Karr’s family emerges not only as a grand collection of eccentrics but also as a sad, troubled clan of misfits, cut off from one another’s love by their secrets and resentments. There’s Ms. Karr’s mother’s great-uncle, who used to dress up as a matador when he got drunk, and her paternal grandfather, who used to climb up on ladders all the time so he could ‘get closer to the Lord.’ Her father’s uncle didn’t speak to his wife for 40 years; instead of getting a divorce, they simply split their house in half and lived in proximity and silence for the rest of their lives. Perhaps oddest (not to mention, meanest) of them all is Ms. Karr’s maternal grandmother, a fierce old woman who carried a hacksaw in her purse and who once sent away for a detective training kit so she could spy on her relatives and friends. Her long and painful convalescence from an amputated leg left Ms. Karr with a lasting, terrifying sense of death.

It is Ms. Karr’s own parents, however, who dominate The Liars’ Club, like ancient Greek colossi with their larger-than-life arguments and fights, their extravagant passions. 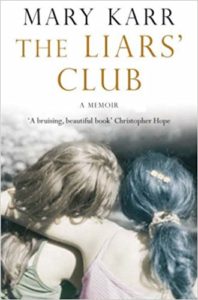 “What’s remarkable about this book, however, is the very fact that she doesn’t turn her parents into two-dimensional stick figures but instead makes them wonderfully palpable human beings, flawed, unreliable, even treacherous but also vulnerable and desperate to love.

Her most powerful tool is her language, which she wields with the virtuosity of both a lyric poet and an earthy, down-home Texan. She’s able to describe everything from her grandmother’s rapacity for argument (she ‘just clamped down on it like a Gila monster’) to the image of her sister diving into the ocean (‘I can see Lecia’s pale white feet like the neon tail fin of a mermaid slipping away just out of reach’) to her own delight in her father’s companionship (just being out with him and his buddies ‘lights me up enough for somebody to read by me’) with equal poise, precision and wit. It’s a skill used in these pages in the service of a wonderfully unsentimental vision that redeems the past even as it recaptures it on paper.