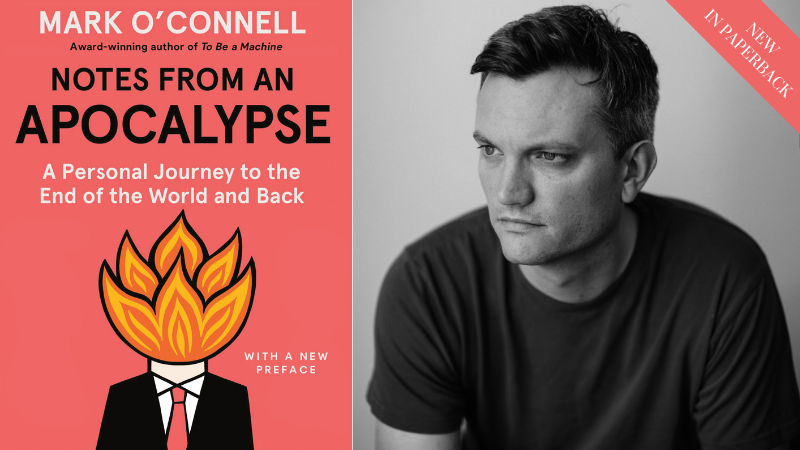 Mark O'Connell on Narnia, Old Man Borges, and The Catcher in the Rye

This week, we spoke to the author of Notes from an Apocalypse (out now in paperback), Mark O’Connell.

Mark O’Connell: I was a huge Narnia guy as a kid. The Lion, the Witch and the Wardrobe was, I think, the moment where I really got on board with the whole reading thing. I read it to my son last year, and I had this very strange and beautiful sense of returning to a part of my own childhood that had somehow been preserved.

MOC: I can’t imagine I’ll ever get tired of reading old man Borges. The stories in The Aleph and Ficciones, in particular, are the closest thing I have to sacred texts, as pretentious as I realise that sounds.

MOC: I re-read DeLillo’s White Noise when I was writing Notes from an Apocalypse, and that is definitely in there. So is a lot of Annie Dillard, especially For the Time Being.

MOC: If we’re talking relatively recently, Shirley Hazzard’s The Transit of Venus. My god what an incredible novel that is. Just perfect, and devastating

MOC: Hari Kunzru’s Red Pill, which was an absolute blast. It was a slightly spooky experience reading it, as it encompassed so many of my own professional and personal preoccupations––apocalyptic foreboding, Silicon Valley techno-utopianism, the weird confluence of transhumanist ideas and far-right ideologies. In one sense it felt like a kind of Pynchon/DeLillo Cold War-era systems novel, but it’s also absolutely of our time. It’s a Internet Novel that is actually good, in that it’s about a lot more than how it’s annoying to have a phone and be on twitter or whatever.

MOC: The last book that made me cry was Max Porter’s Grief is the Thing with Feathers. The final pages of that novel are devastating. It’s the only book I’ve ever read twice through in one sitting. It’s very short, and I read it on a flight to Texas a few years ago, and then read it again straight away because I’d brought nothing else to read. I cried both times! (Apparently people cry easier on planes because of cabin pressure and low oxygen or something. They should just give out copies of Max’s book before take off, and turn commercial flying into huge ceremonies of public emotional catharsis.)

MOC: It hasn’t come out yet, so maybe this is cheating, but Gwendoline Riley’s new book My Phantoms is an absolute masterpiece. A Ghost in the Throat, by the Irish poet Doireann Ní Ghríofa, is a beautiful and unique work of nonfiction.

MOC: There’s a piece in Mr Personality, a collection of Mark Singer’s New Yorker stories, that made me laugh more than anything in recent memory, and maybe ever. It’s called “Supers”, and it’s a profile of these five Irish brothers who all work as superintendents of luxury apartment buildings in Manhattan. It’s just the most delightful thing.

MOC: I’m not sure no one ever heard of it, but there’s a book called A Journey Around My Room by Xavier de Maistre which is I think probably more obscure than most books I’ve loved. It’s a weird and slightly perverse book. Maistre was an 18th century French aristocrat, the brother of the reactionary philosopher Joseph de Maistre, and he wrote it while he was under house arrest in Turin for dueling. It’s a travel book about his bedroom. It’s very charming.

MOC: My first thought here is Sebald’s Austerlitz, so I’m just going to go with that.

MOC: I really love The Catcher in the Rye, and think about it often. I found it really moving and funny, and so alive. That book gets such a hard time from people, but they’re all wrong.

MOC: I’m reading Ishiguro’s Klara and the Sun, and it is (as expected) extremely good.

MOC: Anyone who has read Notes from an Apocalypse will not be surprised to learn that the answer to this question is The Lorax, by Dr Seuss. Although I read Treasure Island to my son quite recently and it is just unbelievably great.

Mark O’Connell is the author of To Be a Machine, which was awarded the 2019 Rooney Prize for Irish Literature and the 2018 Wellcome Book Prize and short-listed for the Baillie Gifford Prize for Non-Fiction. He is a contributor to The New York Times Magazine, Slate, and The Guardian. He lives in Dublin with his family. 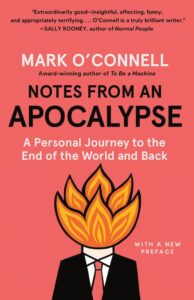