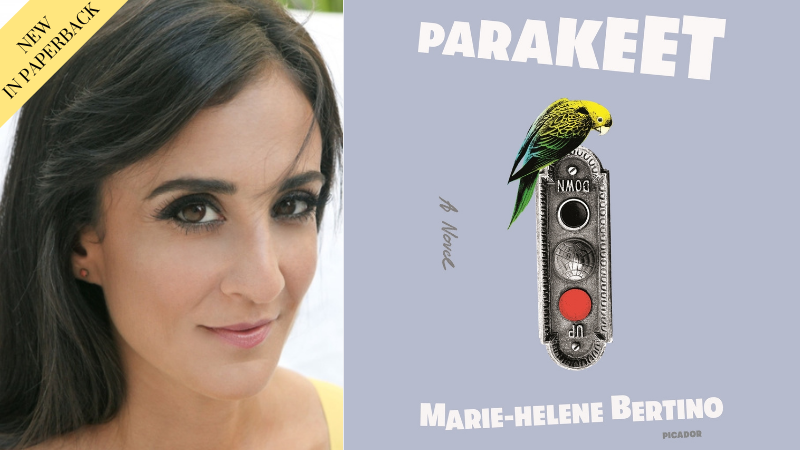 Marie-Helene Bertino on The Bluest Eye, Edward P. Jones, and All the Pretty Horses

Rapid-fire book recs from the author of Parakeet

This week, we spoke to the author of Parakeet (out now in paperback), Marie-Helene Bertino.

Marie-Helene Bertino: The Prydain Chronicles, whose fourth book, Taran Wanderer, is the reason that as a little city girl I longed to ramble the countryside and stumble across surprising allies like strong-willed young sorceresses and harp playing bards. I assumed the countryside was somewhere in New Jersey. As a child I didn’t realize that Taran’s job as an Assistant Pig-Keeper was the author Lloyd Alexander’s wry joke about the hierarchies of office work. Later, when I became an office worker, I knew exactly what he meant.

MHB: There are short stories I reread so often it’s like reminding myself who I am. I’ve no doubt their rhythms are imprinted somewhere in my DNA. They include Edward P. Jones’s “The Night Rhonda Ferguson was Killed,” James Baldwin’s “Sonny’s Blues,” Lucia Berlin’s “So Long,” and everything Amy Hempel has ever written.

MHB: I’d be honored to think Parakeet’s The Bride and Simone would be pen pals with the protagonists of the short stories in Yoko Ogawa’s Revenge, Ramona Ausubel’s A Guide to Being Born, and Leone Ross’s “The Woman Who Loved a Restaurant.”

MHB: No matter how many times I read Edward P. Jones’s Lost In The City, I can’t figure out how he exacts so much humanity and emotion from those simple-seeming sentences. The only event I ever tried to charm my way into was so I could be in the same room as Edward P. Jones. I said words to him, some of them may have even been understandable. He was very kind.

MHB: Last year, I was a mentor to an MFA student named Chantal Rondeau, who is writing a stunning novel called Dreamers. Dreamers follows three generations of Indigenous women, living at different times, who are able to meet and affect one another’s lives because of their hereditary ability to travel in dreams. I’ve never seen a more beautiful or resonant way of literally representing inter-generational trauma (and tenderness) on the page. It’s one of the writing processes I’m lucky to observe for which I am quietly waving my pom-poms.

MHB: What You Can See From Here by Mariana Leky, a bestseller in Germany, is another novel that compiles seemingly simple sentences into profound feeling. It’s about a girl growing up in a small town marked by death. It is very joyful and I admire that most of its characters are older, in their sixties and seventies. I don’t cry often when I read because I’m a frigid cyborg who is usually too busy thinking about what the book is doing and why, but by the end of that honest, loving novel I was shedding tears.

MHB: I’d like to give a shout-out to every other author who published a book into The Great Literary Silence of the pandemic. I’ll specifically mention The Recent East, a debut novel written by my dear pal Tom Grattan. With every pristine sentence, the novel carves out space for queer joy.

MHB: Getting me to laugh while I read is even harder than making me cry because of that annoying thinking thing. Yet! Confessions of the Fox by Jordy Rosenberg shut my incessant thinking off and made me giggle uncontrollably. I had to put the book down until I could get ahold of myself.

MHB: Am I allowed to flip this and say what book I’m so thankful I read during my teenage years? Some amazing teacher put The Bluest Eye by Toni Morrison on our Philly summer reading list that was normally all regular-degular realistic classics. For 11-year-old me, who thought the countryside was in Jersey, reading The Bluest Eye was akin to seeing a dog for the first time (my great love). Poetry and character and risk and wild, real, honest trouble and anger. My life exploded into place.

MHB: Giving a book is like giving someone homework so I tend not to do it without saying: Truly, no pressure. I like giving story collections because odds are one story will emotionally appeal. In addition to those I’ve already mentioned, collections by Manuel Gonzales, Danielle Evans, Laura van den Berg, Lucia Berlin, Anne Carson, Helen Oyeyemi, Helen Phillips, and Thomas Morris are safe bets for enjoyment.

MHB: Too many to name. Anyway, haven’t they been on enough lists?

MHB: The poet Lou Asekoff, one of the best teachers I’ve ever had, told our class that he read The Magic Mountain, closed it, and said, I will never write fiction because he already did that. I’d like to read it and see what wowed someone I consider to be a deeply gifted artist.

MHB: Raise Up Off Me by Hampton Hawes, though I think a lot of musicians have heard of it.

MHB: I taught a class on Magic and Time last semester and during the week we studied loop stories, my student Michele Filgate mentioned a book I hadn’t read: The Victorian Chaise-Longue by Marghanita Laski, published in 1953. It is incredible and undersung and would make a lovely film.

MHB: I love this question. May I assume you mean great as in, that is some great sex, and not: a scene where sex is used effectively in a story. In the case of the latter, it’s usually terrible life-wise but lovely craft-wise. In the case of the former, it almost never involves actual sex. For example, there is one paragraph in Cormac McCarthy’s All the Pretty Horses where John Grady watches Alejandra enter a lake at night. The lapping of the water is the repetition of the phrase, “Do not speak to her. Do not call,” is the withholding of her name, is the time spent putting your mouth on someone over the course of an entire night, is the sex. Do you know what I mean?

She paused midway to look back. Standing there trembling in the water and not from the cold for there was none. Do not speak to her. Do not call. When she reached him he held out his hand and she took it. She was so pale in the lake she seemed to be burning. Like foxfire in a darkened wood. That burned cold. Like the moon that burned cold. Her black hair floating on the water about her, falling and floating on the water. She put her other arm about his shoulder and looked toward the moon in the west do not speak to her do not call and then she turned her face up to him. Sweeter for the larceny of time and flesh, sweeter for the betrayal. Nesting cranes that stood singlefooted among the cane on the south shore had pulled their slender beaks from their wingpits to watch. Me quieres? she said. Yes, he said. He said her name. God yes, he said.

Marie-Helene Bertino is the author of 2 A.M. at the Cat’s Pajamas and the story collection Safe as Houses. She was the 2017 Frank O’Connor International Short Story Fellow in Cork, Ireland. Her work has received The O. Henry Prize, The Pushcart Prize, The Iowa Short Fiction Award, The Mississippi Review Story Prize, fellowships from MacDowell, Sewannee, and NYC’s The Center for Fiction, and has twice been featured on NPR’s Selected Shorts. Formerly the associate editor of One Story and Catapult, she now teaches at NYU, The New School, and Institute of American Indian Arts in Santa Fe. 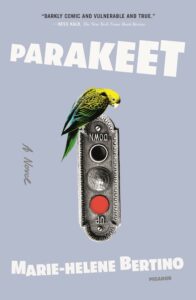