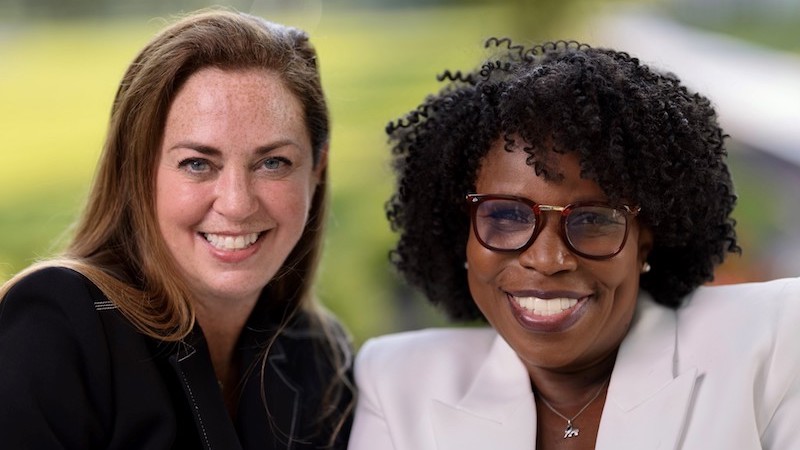 Rapid-fire book recs from the authors of The Personal Librarian

This week, we spoke to the authors of The Personal Librarian, Marie Benedict and Victoria Christopher Murray.

Marie Benedict: The very first book I remember adoring is C.S. Lewis’ The Lion, The Witch, and the Wardrobe, which I know is a favorite of many people. The power of that story is, of course, famously undeniable but, for me, it was more the allure of opening a door and stepping into another world. I think I’ve been trying to do that ever since with my books.

Victoria Christopher Murray: B is for Betsy by Carolyn Haywood. (Wish I had met her!)

MB: I return to Life after Life by Kate Atkinson. Her novel masterfully focuses upon a theme with which I am fascinated—the way in which the past reverberates into the present, oftentimes in ways of which we are unaware—by replaying a particular character’s life and choice with variations for each iteration.

VCM: Hmmm…I don’t reread. I did that once. Reread one of my favorite teenage books and it hit differently, probably because I spent half the book critiquing the writing.

MB: The sheer complexity of the storyline and themes in David Mitchell’s The Bone Clocks both intrigued and astounded me. Of course, it helped that machinations of time—a topic which captivates me—is at the core of this genre-bending novel.

MB: I just finished listening to The Other Black Girl by Zakiya Dalila Harris, and the story kept me on the edge of my (usually car) seat and got me thinking. And I just finished reading a printed copy of Beatriz Williams’ Our Woman in Moscow, which was a page-turner and made me consider afresh the role of women in the underworld of espionage.

VCM: The Son of Mr. Suleman by Eric Jerome Dickey.

MB: While it did not make me cry, certainly Richard Powers’ The Overstory made me deeply sad about state of the environment and utterly reconsider the majesty of trees, their interconnectedness with humanity, and the perils of their future.

MB: I really enjoyed American Spy by Lauren Wilkinson, which was part spy novel and part historical fiction not to mention a unique rumination on issues of racism. I hope there is a sequel.

VCM: Since I’ve already given two shout outs to Yellow Wife, I’d like to give a shout out to Son of Mr. Suleman. It was Eric Jerome Dickey’s 30th and last novel before his death.

MB: It would be a tie between Tina Fey’s memoir Bossypants and David Sedaris’ Me Talk Pretty One Day, both of which made me laugh until I cried.

MB: So many! But if I had to pick just one, I’d probably select Glennon Doyle’s Untamed. Her memoir, with its message about authenticity, might have saved me some time as I learned to listen to my inner voice and find my own life path.

MB: Oh, I never have just one favorite book to give as a gift. I adore giving books as presents, and I enjoy hand-selecting them for the recipients’ individual tastes, particularly since I read widely in so many genres.

VCM: It’s blasphemous to hate a book. There are books that I haven’t enjoyed as much as others, but anyone who has taken time to give birth to something from their soul should be celebrated, not hated.

MB: Sadly, I don’t have a classic book on my To Be Read pile at the moment. My nightstand is teetering with new releases, but I do have a plan to return to the Bronte sisters soon.

VCM: A Tale of Two Cities. I know the entire first paragraph by heart. (Doesn’t everyone) But I’ve never read the book. I must do that.

MB: Decades ago, I devoured Arturo Perez-Reverte’s clever, subtly complicated novel The Flanders Panel and I’ve never met anyone else who’s read it.

VCM: Let Me Hear a Rhyme by Tiffany D. Jackson.

MB: The 21st century still has a ways to go, so I am going to reserve judgment! It seems that we are in a particularly verdant period for excellent literature in all genres, so the race will be tight. That said, I do feel like Yaa Gyasi’s Homegoing is particularly excellent.

VCM: My goodness, I’ve read so many I can hardly remember. Dare I say, Yellow Wife…but maybe because it’s so fresh in my mind.

MB: When I was assigned Jane Austen’s Mansfield Park in high school, I was skeptical about it and felt certain it couldn’t top any of the other Austen novels. Somehow, someway, that novel spoke to me at that time in an unexpected way, more so than any other book on our academic to-read lists.

VCM: Manchild in the Promised Land by Claude Brown.

MB: This question is forcing a confession that I actually read several books at a time! Currently, I am reading Sadeqa Johnson’s Yellow Wife, Helen Oyeyemi’s Boy, Snow, Bird, and an early copy of Anthony Doerr’s Cloud Cuckoo Land, all of which I’m enjoying immensely and simultaneously.

MB: I am going to have to select C.S. Lewis’ The Lion, The Witch and The Wardrobe, even though I already mentioned it, simply because it had such a profound affect upon me. It was so disappointing when it didn’t impact my own children the same way, but then, they have their own list of important books and I suppose that’s all that matters.

VCM: Tie between B is for Betsy and Oh, the Places You’ll Go.

MB: I have to be honest and say that I wish The Personal Librarian would be adapted into a film!

VCM: The Women Who Raised Me by Victoria Rowell.

Marie Benedict is a lawyer with more than ten years’ experience as a litigator. A graduate of Boston College and the Boston University School of Law, she is the New York Times and USA Today bestselling author of The Only Woman in the Room, The Mystery of Mrs. Christie, Carnegie’s Maid, The Other Einstein, and Lady Clementine. All have been translated into multiple languages. She lives in Pittsburgh with her family.

Victoria Christopher Murray is an acclaimed author with more than one million books in print. She has written more than twenty novels, including Stand Your Ground, an NAACP Image Award Winner for Outstanding Fiction and a Library Journal Best Book of the Year. She holds an MBA from the NYU Stern School of Business.