Loving the Monsters Too: On Tim Winton's Cloudstreet 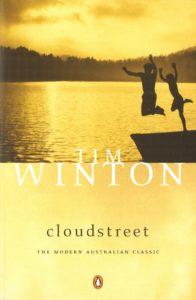 “One of the most wonderful things in the world is to see a novelist striving for greatness—not for his ego, not for his career, not because he might get a prize someday—but because he knows he has the capacity for greatness and just decides to go for it, for the sake of the work. For the reader, watching Tim Winton glow and spread and grow is like watching one of the Flying Wallendas, except that instead of carefully walking a literary tightrope, Winton prances along for a few steps, then takes a few more, adds a couple more chairs and sticks to his literary burden, then miraculously takes off into the air and flies—all his conceits and devices simply a great blur in the sky. He’s a novelist, a great one, because against all evidence and odds, he reminds us what it is to be human, and reminds us to be proud of our humanity.

“In Cloudstreet…[Winton has] set himself the task of declaring: Who gets to own the country? How do people claim their home? Within the bindings of this book, the question is: Who shall inherit Australia? To an international audience, the question becomes: How can all human beings live on this earth without shame, without the burdens of past crimes? How can we shed our small concerns and become as glorious as angels?

Winton’s Western Australia is a terrestrial Paradise; a place of flowing rivers, and a sea where jellyfish and prawns and mullet mill around in abundant traffic jams; a coastal plain where peppermint and eucalyptus trees grow wildly, and the town of Perth is crammed with houses that obscure gardens filled to their borders with vegetables and flowering trees and gabbling chickens and even pigs that occasionally talk—but they don’t say anything very profound.

This is a part of the universe that’s beautiful beyond words, but the people who live here are beset with two overriding problems, twin burdens from the past. There’s the little matter of thousands of slaughtered Aborigines, a whole people expunged from the landscape so that whites might find a place to live; and a leftover, invisible blueprint—a metaphysical import from England—that says to 90% of the white people who make up this town striving to be a city: Everything you do is useless! You are nothing because you come from nothing! You are poor! You are from the underclass! Your dreams are embarrassingly small! Someone else is in charge of the world and you will never meet him! If there is a God in his Heaven, he doesn’t even know your names.

If you’re an American, stop and think. Doesn’t this have something to say about how most of us live? If you’re human, doesn’t some of this ring a bell? 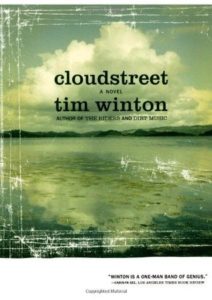 “It is right around the end of World War II. Winton gives us two families, the Pickles and the Lambs. (Of course, they go together, like bacon and eggs.) The Pickles are sloppy, dopey, unregenerate. Sam, the dad, is a small-time gambler on a lifelong losing streak. He early on loses a set of fingers that dance like live prawns before they fall over dead. His wife, Dolly, is a ‘bad girl,’ and that’s putting it mildly. She drinks and picks up men in bars. Their two sons are negligible, and it’s left to their fierce daughter, Rosie, to hold their act together. The Pickle family inherits a huge shambling house in Perth, on Cloudstreet, once owned by the meanest white woman in Christendom, who turned it into a home for Aboriginal girls—until one of them puts a stop to all that by drinking ant poison.

The Pickle family is not into ‘work,’ so they rent out half of their house to another family, the Lambs, who are both different and the same. Lester, the father Lamb, is a sometime song-and-dance man and makes ice cream. His wife Oriel is a working-fool from the working class. She opens up a grocery store in her half of the house, and by driving her husband and kids until they groan and drop, she gives Cloudstreet a name: People can drop by on Cloudstreet and buy penny candies, get stuff for dinner or pick up that ice cream.

The six Lamb children have grown up with tragedy. Young Fish Lamb almost drowned in the river once and now lives in a half-world, able at once to communicate with the cranky pig out back, and the enraged ghosts, both black and white, who still inhabit the Cloudstreet home. 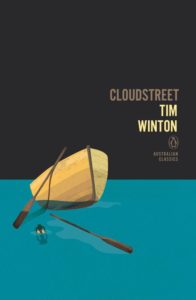 “After 20 years and 400 pages, the ghosts, with their various sorrows and grudges, still own the property. Rosie’s sweet and vulnerable heart has been broken by an upper-middle-class poseur. But the landscape clusters around and waits for love to conquer. To Winton, love is far more than a few magic moments and a moonlit night. If you commit to love, you have to love the whole shebang, not just the woman but her eating disorder; not just the man, but his melancholy. Not just the powdered infant, but the bloody and horrifying birth. Not just the ‘good and hopeful’ people but the ‘monsters,’ too.”