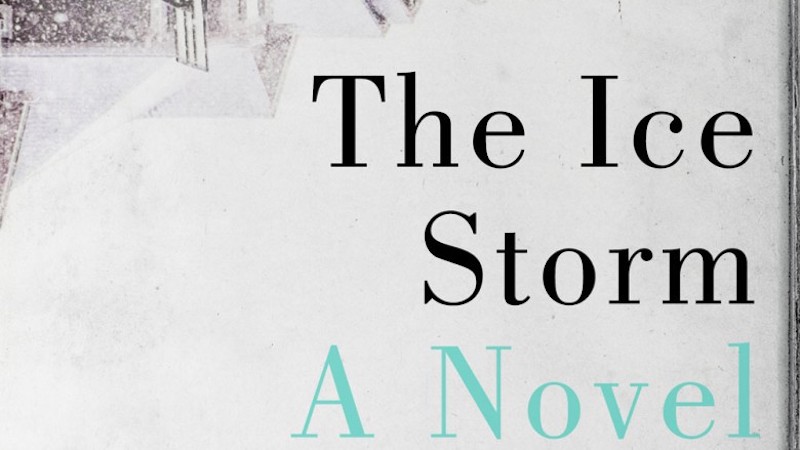 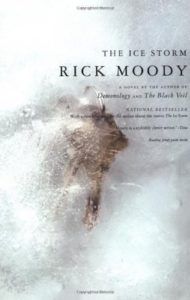 “Rick Moody’s second novel vibrates with period detail, though it is some way off being lovingly recreated. The shag rug, in mustard and forest green, or puce and grey, becomes Moody’s emblem of bad taste, absorbing the detritus – from cheese bits to semen – of lost souls and maladjusted human beings. The Ice Storm is frequently farcical, but what makes it also heart rending is not the fact that its characters are dots in a landscape that will exist long after they have gone; but people who must endure beyond the ephemera that serves to diminish them.

“Any family can get depressed, but this is 1973, and the Summer of Love has ‘migrated, in its drug-resistant strain, to the Connecticut suburbs about five years after its initial introduction.’ The Hood children are on the loose attempting pitiful seductions, while their parents, in an atmosphere of extreme marital disharmony, find themselves at their first ever wife-swapping party.

Here the plot grows increasingly twisted and compelling; an ice storm bursts overhead, and various members of the family are stranded in the wrong bed, on the wrong lavatory floor, or across the wrong train seat. As the Hoods shame themselves and disintegrate we almost wish their customary level of social ineptitude, otherwise nearly intolerable, could have seen them through the night as well as the day.

The reader sticks with this misery, driven by a desire to know whether the characters will break down completely, or somehow break out of their unwholesome world. In the end, however, only the author himself comes across as having sufficient humanity for a broad point of view. Intermittently, and interestingly, Moody raises the question of the place of the narrator in this tale, both declaring him to be one of the characters, now reminiscing, and admitting that there is, let’s face it, a novelist at work here. Contrary to what one might expect, these interludes are refreshing, particularly the passage where he formally introduces violent senselessness as the contribution of nature to the plot.

In short, The Ice Storm is in many ways a truly dismal read, but Moody’s high humour and certain touch make dismal about as enticing as it’s ever going to be.”