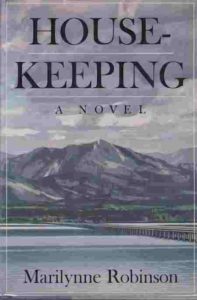 Because, once alone, it is impossible to believe that one could ever have been otherwise. Loneliness is an absolute discovery.

“Here’s a first novel that sounds as if the author has been treasuring it up all her life, waiting for it to form itself. It’s as if, in writing it, she broke through the ordinary human condition with all its dissatisfactions, and achieved a kind of transfiguration. You can feel in the book a gathering voluptuous release of confidence, a delighted surprise at the unexpected capacities of language, a close, careful fondness for people that we thought only saints felt.

Marilynne Robinson’s Housekeeping is not about housekeeping at all, but transience. It is about people who have not managed to connect with a place, a purpose, a routine or another person. It’s about the immensely resourceful sadness of a certain kind of American, someone who has fallen out of history and is trying to invent a life without assistance of any kind, without even recognizing that there are precedents. It is about a woman who is so far from everyone else that it would be presumptuous to put a name to her frame of mind.

Sylvie, the principal character in Housekeeping, is looking after, or looking past, or looking around, two adolescent girls her sister has abandoned in Fingerbone. Fingerbone is one of those towns that seem to be lost between the West and the Middle West. As Miss Robinson puts it, Fingerbone is ‘chastened by an outsized landscape and extravagant weather.’ It is often flooded and, after the waters recede, the graves in the cemetery are sunken, ‘like empty bellies.’ 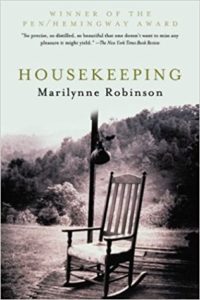 “Miss Robinson works with light, dark, water, heat, cold, textures, sounds and smells. She is like the Impressionists, taking apart the landscape to remind us that we are surrounded by elements, that we are separated from one another, and from our past and future, by such influences.

At one point in Housekeeping, Ruth has grown so awkwardly tall that her sister, Lucille, knocks the heels off her shoes to help her stand and move more naturally. Marilynne Robinson, too, does something like this. She knocks off the false elevation, the pretentiousness, of our current fiction. Though her ambition is tall, she remains down to earth, where the best novels happen.”