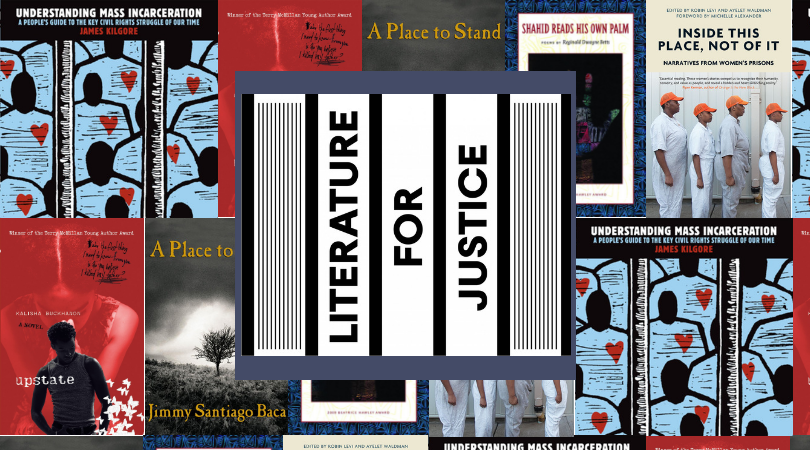 Literature for Justice: Stories of Incarceration

5 books that explore our nation's prisons and the crisis of mass incarceration.

America has the highest incarceration rate in the world. According to a report by the Bureau of Justice Statistics released earlier this year, for every 100,000 people in the United States, over 650 of them are behind bars; but these numbers only tell part of the story. The National Book Foundation (with help from the Art for Justice Fund) recently launched Literature for Justice, a three-year program dedicated to heralding stories that contextualize and humanize the experiences of incarcerated people in the United States.

This year, five esteemed writers and leaders within the space of mass incarceration and social justice—Sergio De La Pava (A Naked Singularity), James Forman Jr. (Locking Up Our Own), Mitchell S. Jackson (The Residue Years), Rachel Kushner (The Flamethrowers), and Dr. Heather Ann Thompson (Blood in the Water)—formed the committee that selected the reading list. From a glimpse at the human rights violations inside a women’s prison to a harrowing portrait of life inside a maximum-security facility, the books listed below convey inmates’ real life experiences and confront many often-overlooked aspects of mass incarceration in America. 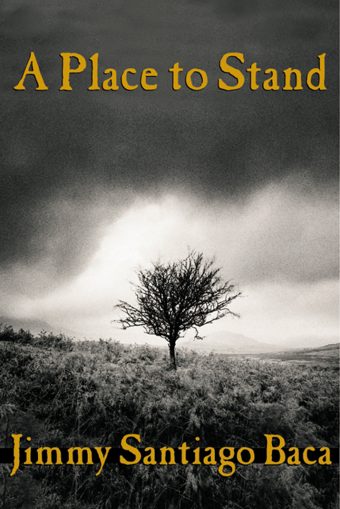 A Place to Stand by Jimmy Santiago Baca

“Chicano poet Jimmy Santiago Baca knew monsters in the Arizona state prison where he served five years in the 1970s for dealing drugs. He could have become a monster himself: Just to survive, he says in this eloquent and gripping memoir, he smashed one inmate in the head with a piece of angle iron and sliced open the stomach of another with a butcher knife.

When Baca was arrested, he couldn’t read or write. He wanted to go to prison school, but the administration, which was headed by a warden who ‘ruled though intimidation, beatings and lockdowns, and by taking away time served and imposing his own sentences,’ said no. Baca, in turn, refused to work. He was placed in solitary confinement, among some of the prison’s most dangerous men—a course that risked his life but also gave him precious time to think.

At this point, A Place to Stand becomes an amazing story. Lying in his cell, remembering a brief period in his childhood when he lived with his grandparents in a traditional New Mexico farming village, Baca discovered that he had things he desperately wanted to write about, and he taught himself to read and write, with minimal help from inmates and outside correspondents. His first note to one of the latter in 1975 is painfully illiterate, but less than two years later he was reading poets Walt Whitman and Pablo Neruda and writing powerful, sophisticated poems of his own … He was highly capable, even without an education—this is clear from the beginning of the book; capable of both good and evil. Still, the velocity of his transformation through literature is breathtaking.”

“A mercifully brief memoir of the Pushcart Prize– and American Book Award–winning Hispanic poet’s criminal past, and his agonizingly slow discovery of the redemptive power of writing while serving a prison term … A brutally unflinching look back at a dead-end youth that became a crucible for vivid and vital art.”

“While readers may find Baca’s poetry more dazzling than this prose memoir about how he became a poet, the author still manages to capture both the reader’s interest and sympathies … The text is structured like a conversion narrative in which Baca’s past symbolizes all that is unhealthy and his poetry-oriented future is filled with the hope and optimism that come from discovering something divine in the midst of darkness.” 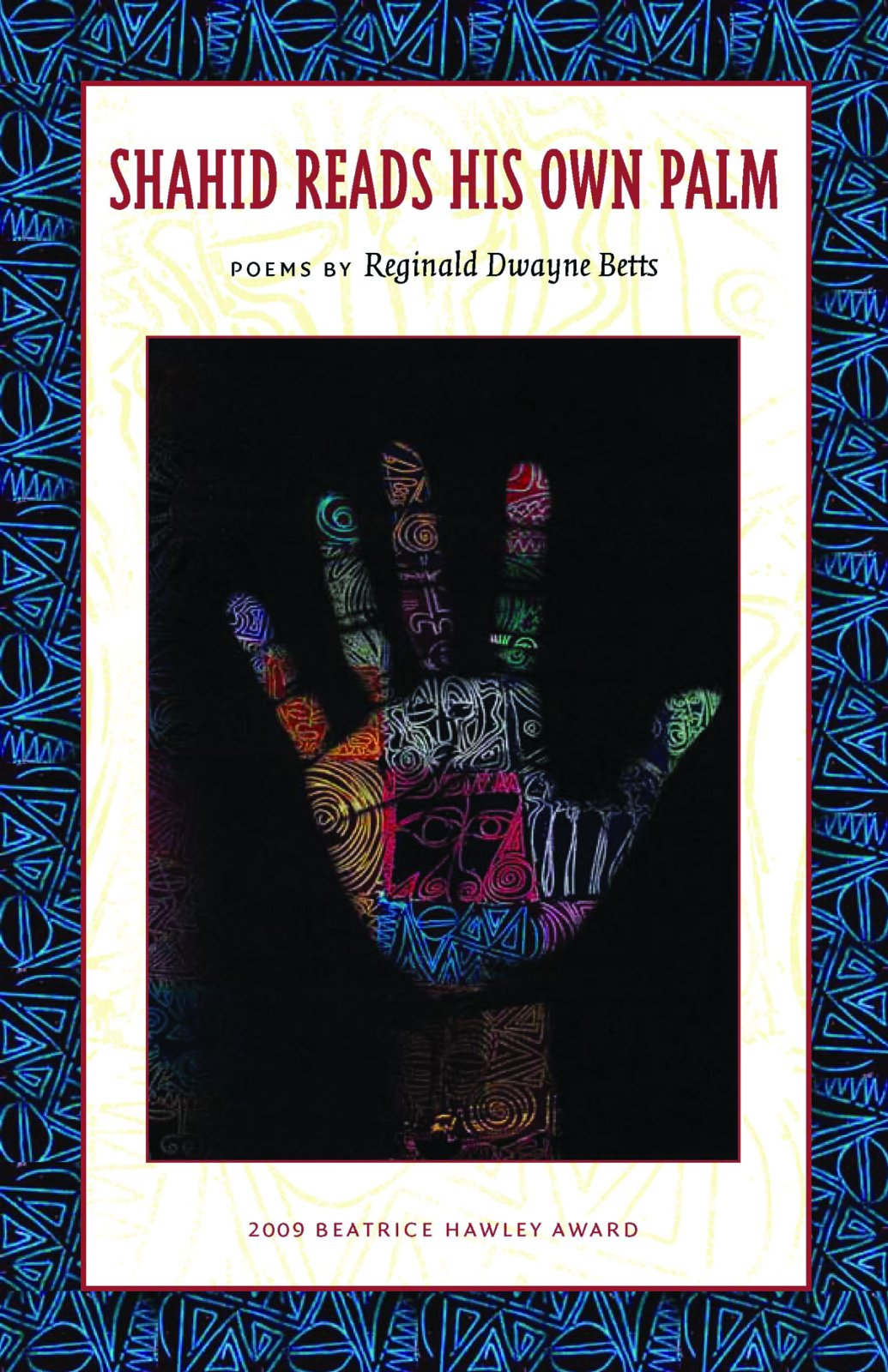 Shahid Reads His Own Palm by Reginald Dwayne Betts

“In his first book of poetry, Shahid Reads His Own Palm, Dwayne Betts joins the experience of being sentenced to prison for nine years at the age of 16 to his thirst for well-crafted lines. The book seems to me the perfect marriage of beauty and truth, as well as a one-of-a-kind testament to the life lived by so many men of color caught in the American prison industrial complex, detailing that experience in a language that is filled with music, lyrical intensity, and muscular, unforgettable juxtapositions. This is not just a typical poetry book by a young person entering the world and learning his craft as he goes along. This book is an event, a testimony which by elevating Betts’ highly dramatic experience to the level of lyric intensity gives the reader a collection of stunning poetry. It is rare, these days, to come across the work of a poet who is so socially engaged and so lyrical in his language at the same time. Betts doesn’t just have a powerful story to tell. He is a true poet who can write a ghazal that sings, howls, rhymes, and resonates in memory years after it was first read.”

“…without taking anything away from the poetry of Shahid Reads His Own Palm—Betts’ work with form here is one of the collection’s strengths, and there’s no poem I’d claim as a prose poem—I think it’s fair to say that this is also a collection of stories, and the stories add up to an overall narrative of lives in prison, or lives attached in some way to a prison. Part of the value of this work is its very intimate take on the U.S prison crisis—and with the U.S imprisoning more people per capita than any other industrialized country, and nearly a quarter of black men having been to prison at some point, it is indeed a crisis—but it would be a mistake to pretend that the primary value of this work is in its topicality. There’s a careful, complicated, and often difficult-to-confront intimacy to the work here, a repeated quiet devastation.”

“Betts’s debut begins and ends with a ghazal. The strictness of this traditional Arabic form (a favorite of the late poet Agha Shahid Ali, to whom the title pays homage) is fitting—both to Betts’s restrained though fierce talent, and to his autobiographical subject matter, introduced in the opening lines as ‘the blues of life in prison.’ Confinement and restlessness, understanding and disbelief cycle through these clear, smart, brave, and often painful poems.” 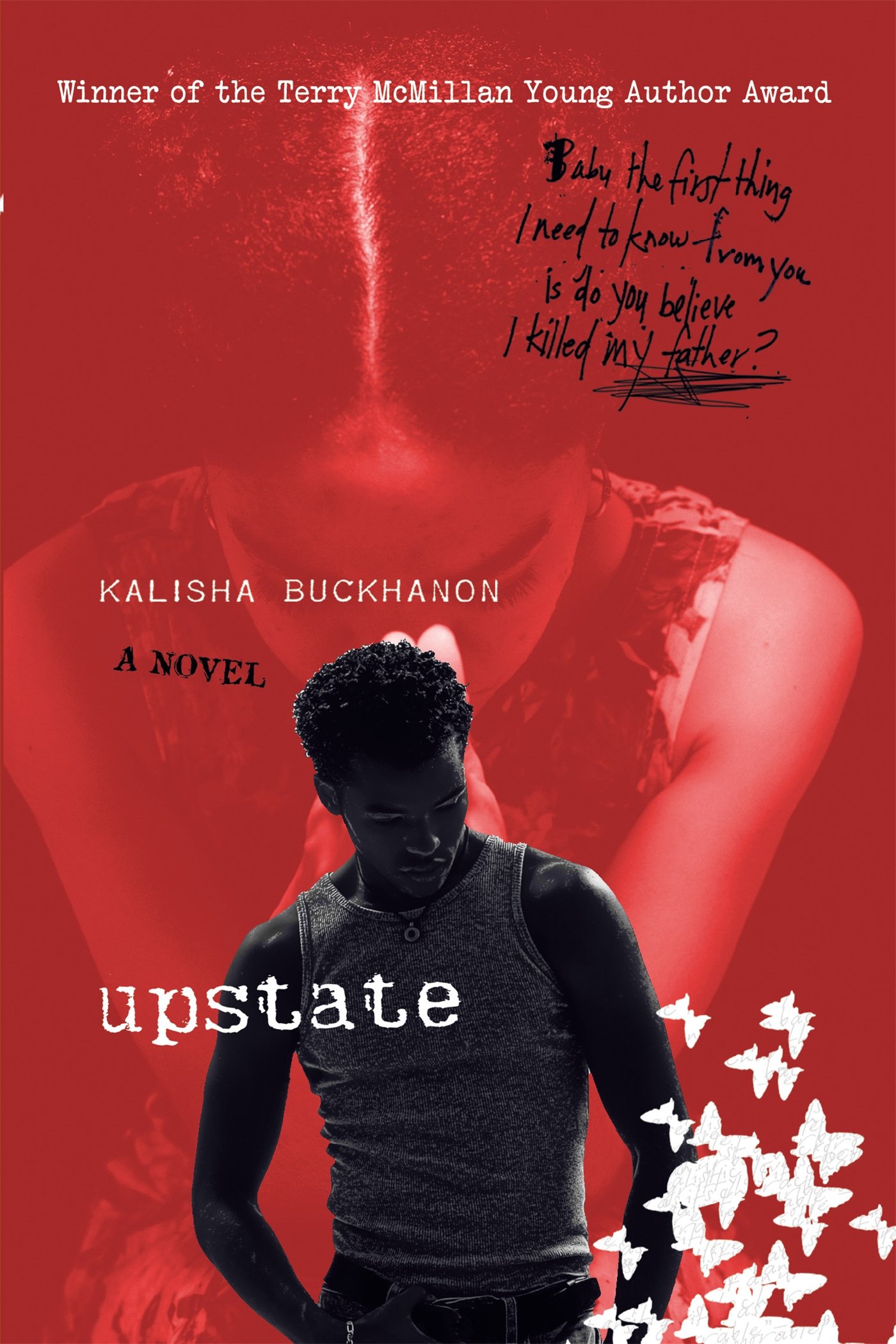 “Kalisha Buckhanon, a protégé of acclaimed author Sapphire, has written a vivid but—be warned—surpassingly sad debut novel. Upstate explores the myriad trials that afflict the poor, especially the African-American poor: fatherlessness, abuse, drugs, homelessness and the appalling rate of incarceration of its young men (‘upstate’ is where most of the prisons are in New York) … Buckhanon’s depiction of prison as a system whose goal isn’t rehabilitation but a stripping away of an inmate’s humanity are brilliantly grim.”

“Like any good love story, this one’s riddled with conflict from the get-go. Antonio and Natasha, two Harlem teenagers, are deeply in love with each other, but their relationship is put to the test when Antonio goes to jail just before their senior year for killing his father, a crime he may or may not have committed. Written in the form of letters between Antonio and Natasha, Buckhanon’s debut novel captures the young lovers’ anger, hope and frustration … this is a moving, uplifting story of love and hope in the face of adversity.” 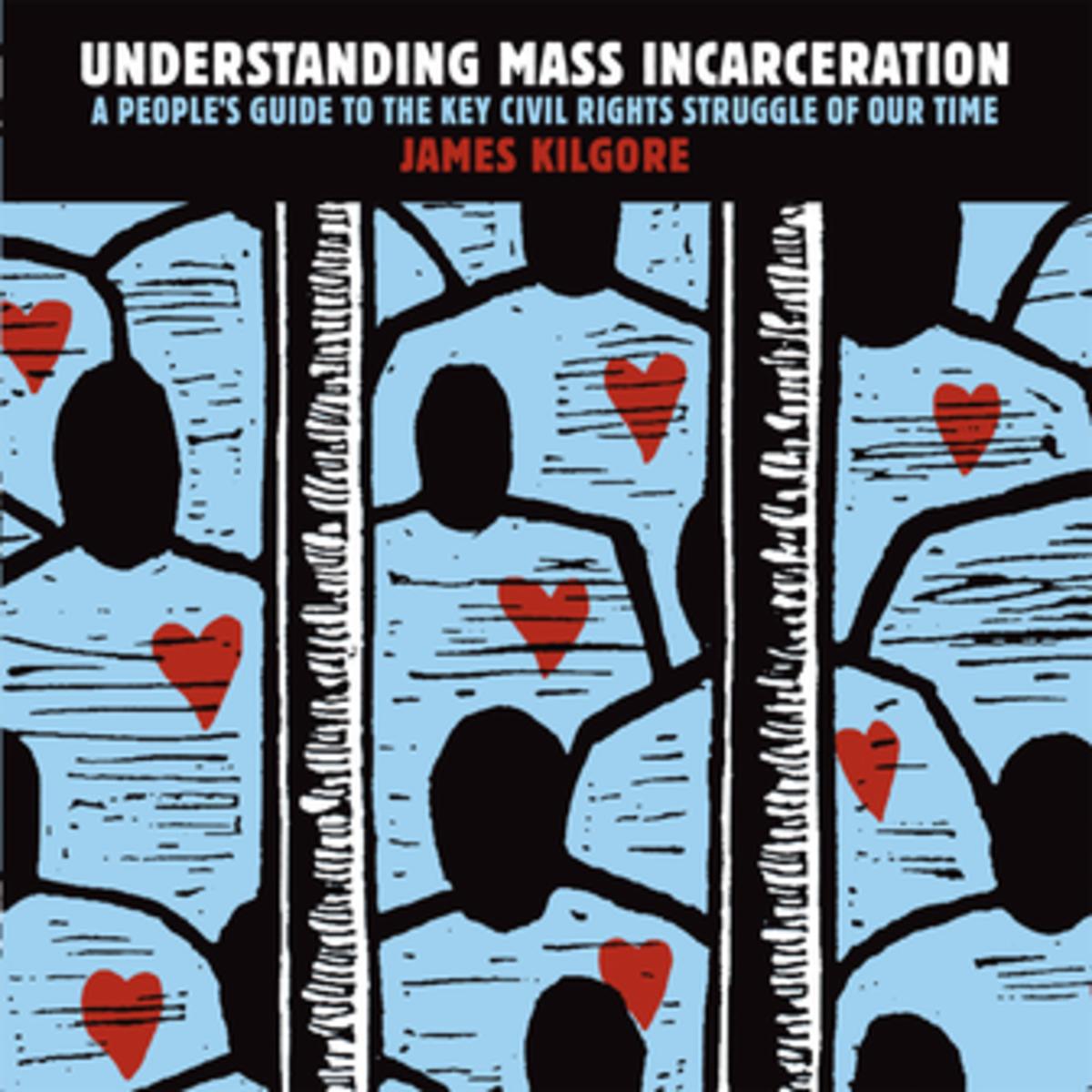 “This important polemic from Kilgore (We Are All Zimbabweans Now) presents a grim picture of the U.S. criminal justice system. It may come as no surprise that prisons and jails are rife with abuses of power and funds, lack of resources, and corruption. That African-Americans, Latinos, and transgender people are disproportionately imprisoned is well known. What transforms these social injustices into what Kilgore presents as a national disgrace is the unprecedented growth in the incarcerated population over the past 40 years … With stunning statistics and heartbreaking stories, the book reveals how the system prevents individuals and their families from moving beyond incarceration … The author makes a powerful call to reverse a cycle in which more people serve longer sentences with fewer opportunities to return to society.”

“Many—though perhaps not enough—Americans are familiar with media-presented statistics that point toward an overwhelming tendency for our justice system to target and prosecute crimes committed by black people. The reality, Kilgore shows, is more nuanced. There is truth to that tendency, to be sure, but there has also been a cultural shift toward a bias against other minority groups, including transgendered and gender-nonconforming people … In the introduction, the author states that it was his goal to explore the incarceration situation in a way that is both comprehensive and accessible. On both counts, he has succeeded. Useful for anyone with a horse in the race regarding law enforcement—in other words, most American citizens.” 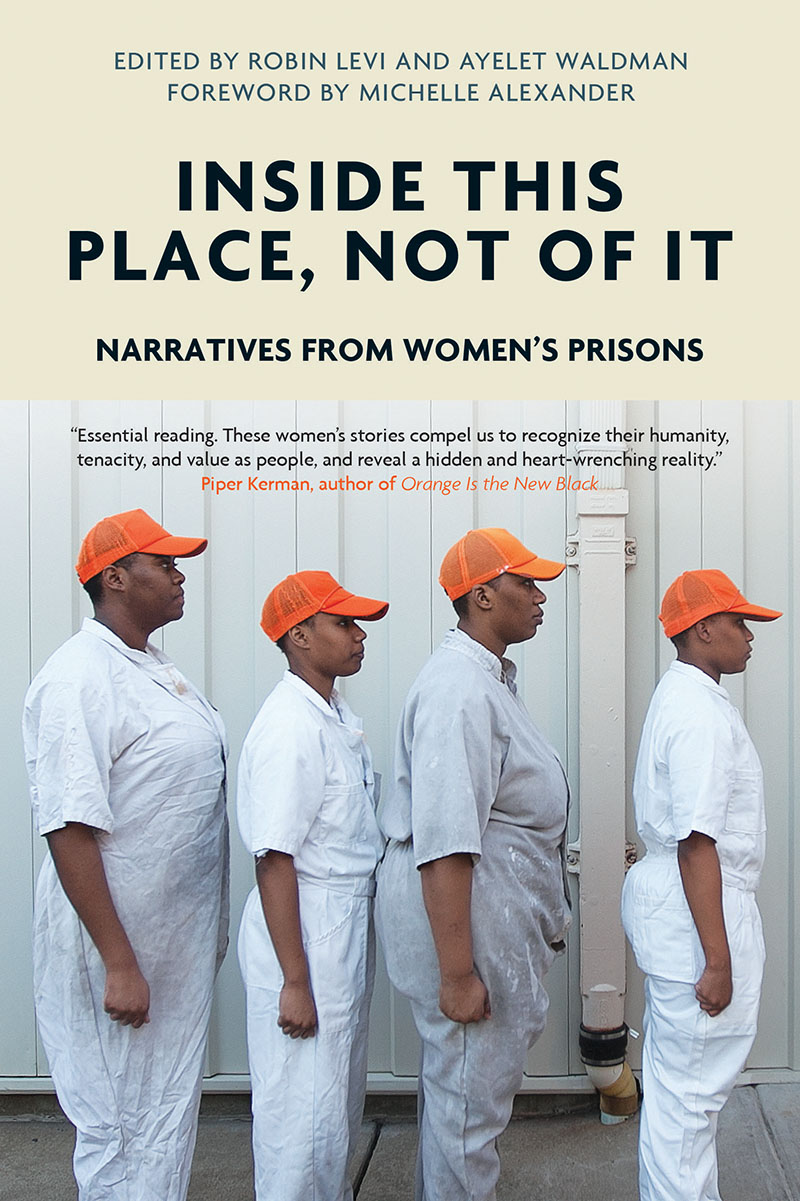 Inside This Place, Not of It by Robin Levi and Ayelet Waldman

“Inside This Place, Not of It: Narratives from Women’s Prison provides a chilling glimpse of the human rights abuses suffered by women in U.S. prisons. The book is essentially a set of edited interview transcripts, with each chapter providing a first-person account of a different currently or formerly incarcerated woman. What these narrators reveal about their lives will cause readers to shudder at the myriad physical, sexual, and psychological abuses they have endured … The book makes for a captivating read, but far more than that, it illuminates several major forms of injustice which characterize these women’s lives … The personal accounts in this book provide a solid emotional and intellectual grounding for lay readers and criminal-justice experts alike to understand the contexts of the crimes women commit and the social forces which propel the poor life choices that land them in prison.”

“These narratives are incredibly compelling. To me, they are a reminder of how thin the line is between those of us who thrive and those of us who struggle, and how much our lives can be changed as a result of bad circumstances, bad choices, or bad luck. Would any of us be the same people if we were born in less comfortable neighborhoods? We judge so harshly, sometimes, and yet from reading these narratives, you will see, we often subject women prisoners to circumstances from which any result other than a downward spiral is surely a miracle.”

Curious about what the Literature for Justice Committee had to say about each title? Read more over on Lit Hub.