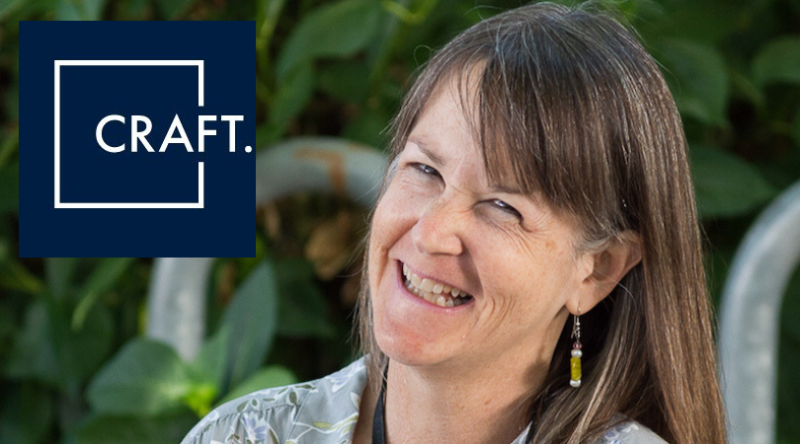 This week we spoke to fiction writer, critic, and Founding Editor of CRAFT, Laura Spence-Ash.

Laura Spence-Ash: Ulysses or Gravity’s Rainbow. I read both books in college with the professor who became my mentor. He changed the way that I thought about literature, and it was mostly through a careful examination of these two books. Only later did I realize that it was, in part, the way both writers pushed the boundaries of what was acceptable that made them so exciting to read. I can remember where I was when I opened Gravity’s Rainbow for the first time and read those opening lines: “A screaming comes across the sky. It has happened before, but there is nothing to compare it to now.” I didn’t want to do anything else but continue to read. But imagine what it must have been like to read Ulysses in 1922. I worry that I might have reacted as Virginia Woolf did: “When one can have cooked flesh,” she writes, “why have the raw?”

LSA: Other People’s Love Affairs by D. Wystan Owen. This lovely book came out in August from Algonquin. It’s a quiet debut collection that illustrates the beauty of a perfect short story and the way that a good collection is so much more than its parts. Owen points to both Yiyun Li and William Trevor as writers who have had a great influence on his work, and there is a clear lineage. This was one of those books that I couldn’t bear to read all at once, in part because I wanted to spend time with each word, each sentence, and each paragraph, but also because I didn’t want my experience of reading the book to end. Owen is also a wonderful essayist and critic; his piece, “Getting Lost In William Trevor’s Private World,” is a classic. He is a beautiful writer and one that I hope we will have the opportunity to read for a very long time.

LSA: I hear people complaining that critics are too quick to judge and dismiss work, and that they often misread or misunderstand the intent of the author. While I understand that reaction, it is certainly not my experience as a critic. If anything, as a writer I find that I’m a more generous reader and it can be very difficult to judge anyone’s work harshly. The more time I spend with a book, the more I find to admire. It’s one of the things I love about reviewing books: the opportunity to spend such dedicated time with a work, to really consider it from multiple angles. It makes me think about what catches my attention and why, and it allows me to truly engage with the book on such an intimate level. Unfortunately, time and money come into play here: while I wish that I could spend a week or more working on a review, and only on a review, that’s simply not possible. And I suspect that’s part of what drives the perception that some reviews are written hastily and without much thought.

LSA: It’s changed for the worst in the obvious ways: our attention has become fractured and so it seems that we are less likely to read long, in-depth reviews. I don’t have any quantifiable data, but it does seem as though reviews that tackle multiple books at once, considering their intersections, or reviews that consider the trajectory of a writer’s career, are harder to find now. It’s also too easy to scan social media and dismiss books out-of-hand, based on a pull quote from a review. But on the upside, social media does allow access to more reviews, more easily. I love Tuesdays on Twitter, because I get so excited about all the new books out that week; there’s such joy in seeing how supportive the writing community can be. If only there was time to read even a fraction of them!

LSA: Rigoberto González teaches at Rutgers-Newark, where I received my MFA, and it was under his tutelage that I wrote my first reviews. As a fiction writer, I was woefully uneducated about poetry until I started my MFA, and I learned (and continue to learn) so much about both poetry and criticism from reading his work. His reviews are analytical and always instructive; he’s very considerate and thorough, focused on the work, and he uses perfect examples to illustrate the points that he makes so eloquently. “Mid-Career: Three Poets and their Fourth Books” at the Los Angeles Review of Books is a wonderful example of his criticism.

Laura Spence-Ash’s work has appeared in One Story, New England Review, Literary Hub and elsewhere. Her book reviews have been published in Ploughshares,The Masters Review, and the National Book Critics Circle blog. She is the Founding Editor of CRAFT. Currently working on a collection of linked stories and a novel, Laura received her MFA in Fiction from Rutgers-Newark.