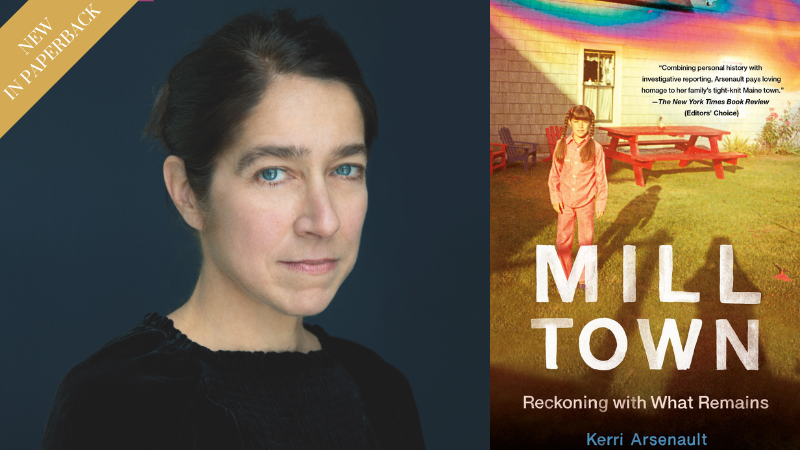 Kerri Arsenault on White Noise, The Sellout, and Middlemarch

Rapid-fire book recs from the author of Mill Town

This week, we spoke to the author of Mill Town (out now on paperback), Kerri Arsenault.

Kerri Arsenault: The 1977 novel The Thorn Birds by Colleen McCullough, about the illicit affair between the Catholic priest, Ralph de Bricassart, and Meggie Cleary, who was an underage girl when the two first met. I must have read it a million times and it came out when I was only ten. In retrospect, it seems like a wholly inappropriate book for a ten year old to be reading! But I also read around that same time Soul on Ice by Eldridge Cleaver, which steeled me against believing in such fantasies…or any fantasies.

KA: The Peregrine by JA Baker and White Noise by Don DeLillo.

KA: I fantasize about a panel discussion with these books and authors: White Noise by Don DeLillo; Evil Geniuses by Kurt Andersen; Dictionary of the Undoing by John Freeman; Slow Violence and Environmentalism of the Poor by Rob Nixon; and American Salvage by Bonnie Jo Campbell.

KA: Two books: Cesar Aira’s The Divorce, translated by Chris Andrews, and Eric Vuillard’s The Order of the Day, both novels, both spectacular prose, and both slightly experimental and dark and wonderful and entangled. Also: People from my Neighborhood by Hiromi Kawakami, translated by Ted Goossen. Bite-sized portraits of a fictional exburb that, without warning, goes down mischievous paths.

KA: The Circle by Dave Eggers and China Room by Sunjeev Sahota. Both terrifying. I love being terrified.

KA: I didn’t cry but was moved by Last Night at the Lobster by Stewart O’Nan and Hisham Matar’s memoir, The Return.

KA: Gordo by Jaime Cortez! It was just published in August, but it is one of the best books of the year, second only to David Searcy’s The Tiny Bee That Hovers at the Center of the World. Searcy is a stunning stylist and thinker, always surprising,  often very funny, and a gentle alien. Every sentence he writes inspires me.

KA: Portnoy’s Complaint by Philip Roth, and of course, The Sellout by Paul Beatty.

KA: Why pick one? Silent Spring by Rachel Carson and Notes of a Native Son by James Baldwin.

KA: Middlemarch by George Eliot – I just bought it!

KA: Susan Minot’s Rapture is fun, as she maps a blow job from he says-she says points of view. I also like Pola Oloixarac’s focus on the vagina, particularly in her latest book, Mona.

KA: Someone has surely heard of Garden by the Sea by Mercè Rodoreda and translated from the Catalan by the mother and daughter team of Martha Tennent and Maruxa Relaño. It’s such a quiet and unsettling book set in post-war Spain, from the point-of-view of the gardener who tends to the home of the rich and carefree.

KA: That’s impossible to answer! I can’t remember all the books I’ve read! Today, it would be The Every by Dave Eggers. My answer will change tomorrow. And it would have been different yesterday. If you asked me last spring, it would have to be Semezdin Mehmedinovic’s novel, My Heart, translated by Celia Hawksworth.

KA: The Jungle by Upton Sinclair.

KA: Memory of Memory by Maria Stepanova, trans. by Sasha Dugdale and Hurricane Season by Fernanda Melchor, translated by Sophie Hughes, both from New Directions.

KA: Mine, of course! Or Gordo by Jaime Cortez.

Kerri Arsenault is a book critic, teacher, book editor at Orion magazine, and author of the best-selling book, Mill Town: Reckoning with What Remains, which won the Maine Literary Award for nonfiction and the Rachel Carson Environmental Book Award from the Society of Environmental Journalists. Mill Town was also a finalist for the National Book Critics Circle Leonard Prize. Kerri’s work has appeared in Freeman’s, the Boston Globe, Down East, the Paris Review, the New York Review of Books, Air Mail, and the Washington Post. 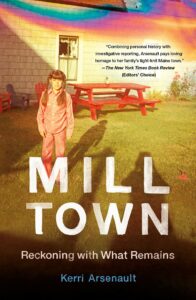 Kerri Arsenault’s Mill Town is out now in paperback from St. Martin’s Griffin