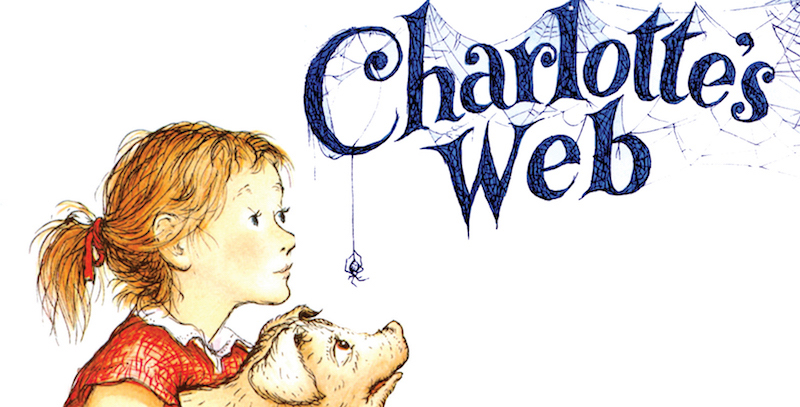 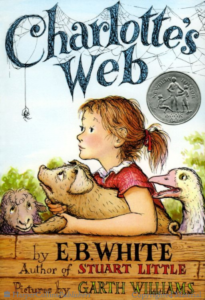 “Why did you do all this for me?” he asked. “I don’t deserve it. I’ve never done anything for you.”

“You have been my friend,” replied Charlotte. “That in itself is a tremendous thing.”

“E. B. White has written a book for children, which is nice for us older ones as it calls for big type. The book has liveliness and felicity, tenderness and unexpectedness, grace and humor and praise of life, and the good backbone of succinctness that only the most highly imaginative stories seem to grow.

Wilbur is of sweet nature—he is a spring pig—affectionate, responsive to moods of the weather and the song of the crickets, has long eyelashes, is hopeful, partially willing to try anything, brave, subject to faints from bashfulness, is loyal to friends, enjoys a good appetite and a soft bed, and is a little likely to be overwhelmed by the sudden chance for complete freedom.

Charlotte A. Cavitica (‘but just call me Charlotte’) is the heroine, a large gray spider ‘about the size of a gumdrop.’ She has eight legs and can wave them in friendly greeting. When her friends wake up in the morning she says ‘Salutations!’—in spite of sometimes having been up all night herself, working. She tells Wilbur right away that she drinks blood, and Wilbur on first acquaintance begs her not to say that.

“Another good character is Templeton, the rat. There is the goose, who can’t be surprised by barnyard ways. ‘It’s the old pail-trick, Wilbur. . . . He’s trying to lure you into captivity-ivity. He’s appealing to your stomach.’ The goose always repeats everything. ‘It is my idio-idio-idiosyncrasy.’

What the book is about is friendship on earth, affection and protection, adventure and miracle, life and death, trust and treachery, pleasure and pain, and the passing of time. As a piece of work it is just about perfect, and just about magical in the way it is done. What it all proves—in the words of the minister in the story which he hands down to his congregation after Charlotte writes ‘Some Pig’ in her web—is ‘that human beings must always be on the watch for the coming of wonders.’ Dr. Dorian says in another place, ‘Oh no, I don’t understand it. But for that matter I don’t understand how a spider learned to spin a web in the first place. When the words appeared, everyone said they were a miracle. But nobody pointed out that the web itself is a miracle.’ The author will only say, ‘Charlotte was in a class by herself.’

‘At-at-at, at the risk of repeating myself,’ as the goose says, Charlotte’s Web is an adorable book.”