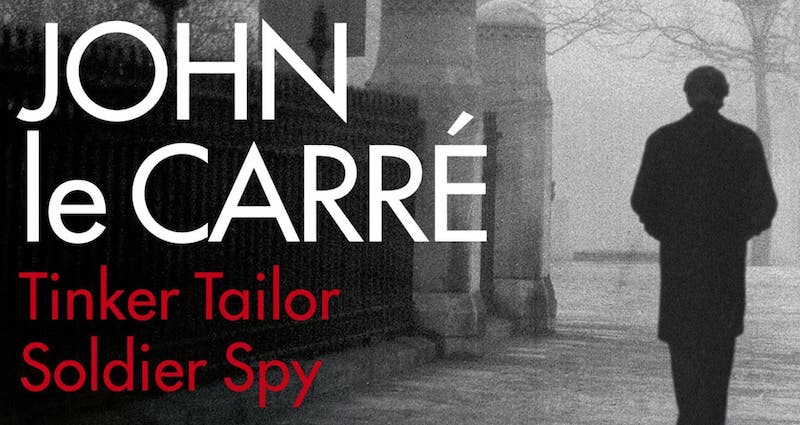 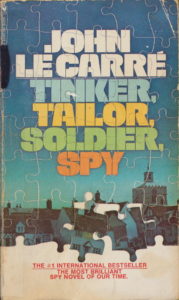 It’s the oldest question of all, George. Who can spy on the spies?

“John Le Carré new book — his seventh in thirteen years — is a thoroughly enjoyable English spy novel about the discovery of a double agent at the highest level of the British Intelligence bureaucracy. It reconfirms the impression that Le Carré belongs to the select company of such spy and detective story writers as Arthur Conan Doyle and Graham Greene in England and Dashiell Hammett, James M. Cain, Raymond Chandler and Ross Macdonald in America. There are those who read crime and espionage books for the plot and those who read them for the atmosphere; the former talk of ‘ingenious puzzles’ and take pride in ‘pure ratiocination’; the latter think themselves more literary, worry about style and characterization, and tend to praise their favorite writers as ‘real novelists.’ Le Carré’s books — like those of the six authors just mentioned — offer plenty for both kinds of readers.

Tinker, Tailor, Soldier, Spy is fluently written; it is full of vivid character sketches of secret agents and bureaucrats from all levels of British society , and the dialogue catches their voices well. The social and physical details of English life and the day to day activities of the intelligence service at home and abroad are convincing. Unlike many writers Le Carré is at his best showing men hard at work; he is fascinated by the office politics of the agency since the war. He even has a go at such ‘novelistic’ effects as interlocking themes of sexual and political betrayal. Yet the plot is as tangled and suspenseful as any action fan could require, and the inductive skill of the diffident, intellectual hero should bring joy to the hearts of the purists. The scale and complexity of this novel are much greater than in any of Le Carré’s previous books. 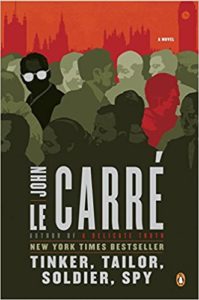 “Its hero is a character whom Le Carré has used in almost every book, sometimes as the hero, sometimes in a minor role. Now he is more carefully developed than ever before.

George Smiley is a pudgy, middle-aged secret agent who seems ‘breathtakingly ordinary.’ He’s a quiet, bespectacled Oxford man with an interest in 17th-century German literature, an embarrassed or abstracted air, considerable physical awkwardness, and ill-fitting though expensive clothes. He is married to a glamorous, intelligent, aristocratic wife who (as at the start of every novel) has run off with one of her many lovers.

Smiley is thus an anti-James Bond, an unheroic, frequently cuckolded secret agent who looks like a shy and miserable clerk in an old London bank. In fact, of course, Smiley is the finest secret agent in the world; his pathetic demeanor conceals a brilliant mind and stout heart. Smiley is one of the last English gentlemen — not a strutting parody of the clubman, like Bond, or a foppish and conniving political type, but an honorable, decent fellow who hasn’t much hope or comfort in the postwar world. He is the sorry witness of national decline, epitomized by the service: ‘The inspired amateurism of a handful of highly qualified, underpaid men had given way to the efficiency, bureaucracy and intrigue of a large Government department.’ 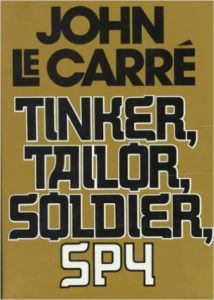 “In Tinker, Tailor, Soldier, Spy Smiley comes to stand for moral and intellectual authority. He is the best man, responding to the call of duty: to spy against his former colleagues. Le Carré has learned a lot since he first created Smiley; he now can handle complementary heroes and intertwining plots. The story of Jim Prideaux, a strong field agent who was shot in the back in suspicious circumstances abroad, counterpoints Smiley’s research activities with melodramatic foreign adventures. In yet a further reclamation of old territory, Le Carré also sets the subplot at a public school, which is much more vividly portrayed than that in his second novel. His characterization too has become much richer: we meet Cabinet ministers, Whitehall officials, aides, journalists, old office hands; and there is an extremely dextrous off-stage portrait of Smiley’s faithless wife. Le Carré has never presented so much detail about the intelligence Establishment, and he moves easily from past to present, from adventure to research and induction, and keeps one guessing right to the end which of the five top men is the double agent. Smiley has become humanity at its decent English best; the glamour of the Empire has faded, but he quietly carries on.

Since 1960 the newspapers have been full of major spy stories: the U-2 overflights, the Philby conspiracy, the dangers of the Profumo affair, the Bay of Pigs, the Cuban missile crisis, the Kennedy assassination, the C.I.A.’s activities in Indochina and Latin America, the rise of domestic surveillance and agents provocateurs, the Pentagon Papers, Watergate, the resignation of Willy Brandt. Le Carré’s novels perfectly express the moral and political disillusion such revelations evoke in citizens of democratic countries who have long prided themselves on their ‘open societies.’ 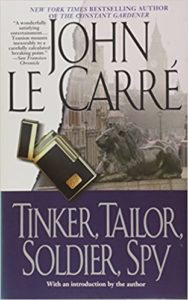 “However, are not Le Carré’s novels, even at their best, falsely comforting? For all their angry social criticism, they always offer us the pleasures of imagining the world as it was portrayed in the good old-fashioned English novel of class and character, manners and morals: the surface details of the physical and social world are clearly seen; people’s looks and voices are immediately categorized and brightly reproduced; the plots are complex, suspenseful, full of historical details, but they are always triumphantly concluded, all mysteries and ambiguities neatly resolved. The psychology is straightforward; motives tend to be unmixed; the tangles of sex and family life are simplified.

Le Carré’s novels appear to dispel the romantic illusion of a strong, noble British Daddy who knows best: but is not George Smiley essentially a somewhat reduced and saddened but good old British Daddy all the same? Leamas dies a violent death, Smiley lives to rejoin his wife and spy another day; but in both cases they perpetuate national stereotypes. Quite inadvertently Le Carré’s novels reinforce the sodden liberalism they claim to condemn. They are nostalgic and given to self-pity; they offer two-dimensional models of human experience, melodramatic or sentimental answers to political dilemmas, and the simplistic and self-comforting suggestion that good men (and readers) should give up politics for lost and go and cultivate their gardens. Le Carré’s books repeatedly express a horrified, morally outraged but essentially naive retreat from the full imagination of politics and society. His novels thus bear only superficial resemblance to such complex and ironic spy novels as Kurt Vonnegut’s Mother Night (1961), Anthony Burgess’s A Tremor of Intent (1967) and — on the grand scale — Thomas Pynchon’s V. (1963) and Gravity’s Rainbow (1973). In those books human experience is intrinsically problematical, often absurd; in Le Carré’s books everything works out. When Le Carré tried for depth in his last novel, he failed; modernism and the ironies of the literary novels of the 1960’s are beyond him; but when, as in this new book, he shows the surface of experience in that good old-fashioned way, he is thoroughly entertaining.”