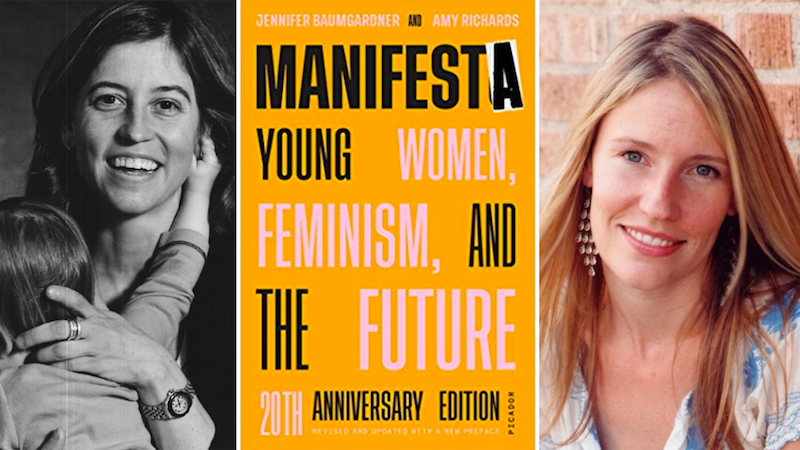 Rapid-fire book recs from the authors of Manifesta

This week, we spoke to spoke Manifesta: Young Women, Feminism, and the Future authors Jennifer Baumgardner and Amy Richards.

Jennifer Baumgardner: No Flying in the House by Betty Brock was a favorite; I fantasized about flying, magical powers, and jewels, all of which factor into this middle grade book about a little girl (Annabel) with no parents. She’s cared for by a tiny talking dog named Gloria. Sort of odd.

Amy Richards: Jane Eyre, which was mostly a consequence of literature classes that were so jam-packed with male classics and coming of age stories, which I used to pretend I liked.

JB: I’ll go with Metropolitan Life by Fran Lebowitz. I respect her hatred of technology and I like short, funny books.

AR: Just Mercy, which I’m re-reading now and also listening to on audio. At first I focused on Bryan as the central figure, now I’m focused on all of the people who he represented.

JB:  Manifesta was conversing with other feminists, especially those who didn’t see themselves as a good enough, so I’ll say it is in conversation with Bad Feminist by Roxane Gay.

AR: bell hook’s Feminism is for Everybody has the same sense of feminism 101 and Angela Davis’s Women, Race & Class offers a more comprehensive history of how women have been denied their rights.

JB: The Girls Who Went Away by Ann Fessler is about women pre-Roe who were coerced, essentially, to surrender their babies for adoption. It’s a heartbreaking history that changed my perspective on reproductive justice.

AR: Their Eyes Were Watching God—and then I went on a tear and read every book by Zora Neale Hurston. For Her Own Good by Barbara Ehrenreich and Deirdre English made me realize how manipulated I had been.

JB: I Like to Watch by the great Emily Nussbaum, which has the smartest take on #MeToo I’ve seen thus far. I’m about to read Females by Andrea Long Chu. Chu argues that being female is not the condition of having a uterus (or similar), but an existential state that afflicts all humans.

JB: I cried at the end of My Year of Rest and Relaxation by Ottessa Moshfegh, but I’m easily emotional about 9/11. I sobbed at Being Mortal by Atul Gawande, too.

AR: The Underground Railroad by Colston Whitehead. I teared up many times in Becoming by Michelle Obama. I was so moved by her devotion to her family. Harry Potter books 6 and 7 get me teary over and over again!

JB: The World According to Fannie Davis by Bridgett M. Davis (wonderful writer) is a love letter to Bridgett’s daring mother and to her Detroit community.

AR: Being Heumann: An Unrepentant Memoir of a Disability Rights Activist by Judith Heumann, which will be coming out soon. Her humility and fierce intentions made a big impact.

JB: Two memoirs: Tina Fey’s Bossypants. I was also into theater, virginity, and not doing drugs as a teenager, so her memoir hit close to home. Also,The Madwoman in the Volvo, by Sandra Tsing Loh. It’s basically about menopause and reconciling with how one’s life unfolds.

AR: Yes Please by Amy Poehler; my family is big fans of Parks & Recreation, so it was fun to laugh and read out loud.  Always Bossypants, and I have frequently quoted her descriptions of her honeymoon on a cruise and the Christmas she spent at the Lycoming Mall, which I am very familiar with.

JB: Depends on the person! I’ve given The Riot Grrrl Collection (edited by Lisa Darms) because it’s very visual, Crazy Salad (Nora Ephron) for classic hilarity, The Elements of Style (Strunk and White) which perhaps is a bad gift, and I gave Bill Cunningham: On the Street to both my mother and my friend Drew last month.

AR: For kids, Amelia and Eleanor Go for a Ride and recently Women & Power by Mary Beard—a short history of patriarchy. And almost anything by Maira Kalman. Gavin de Becker’s The Gift of Fear is the one I recommend the most.

JB: Tender Buttons, which I read it in college in 1990. It’s probable that I didn’t understand what Gertrude Stein was doing, but I remember it as gibberish and I haven’t returned to it to reassess.

JB: Moby Dick, which my husband is currently tackling. I read Jill Lepore’s New Yorker article about the Melville centennial and felt inspired, in theory.

AR: Anna Karenina—every time I start it, I think it’s just so long! I was traveling many years ago with a friend and she was reading it and synopsize for me every morning, so I might have to leave it at that.

JB: Airless Spaces by Shulamith Firestone: tiny, precise, explosive scenes of mental illness from a brilliant thinker who, after a bestseller in 1970 (The Dialectic of Sex), retreated from the women’s liberation movement she helped to found (into mental illness).

JB: Because I think it is impossible not to be amazed by this book, I’ll say The Immortal Life of Henrietta Lacks. Lacks’ story is tragic and unjust, her legacy is incredible, and both would have remained obscure without Rebecca Skloot’s commitment and reporting.

AR: In addition to everything mentioned: Another Brooklyn by Jacqueline Woodson.

JB: I don’t recall what I was assigned at Fargo South High, actually. (I need Prevagen.)

AR: Beloved by Toni Morrison. I really chose it, in a senior seminar. Besides Jane Eyre there was very little that I was assigned that I related to.

JB: Nothing to See Here by Kevin Wilson is on my nightstand. Does that count?

AR: Assume Nothing by Tanya Selvaratnam, who is a friend and this will be coming out in April 2020. And re-reading Little Women. I have always felt attached to that book in part because I share a name with one of the main characters.

JB: I love all of Anastasia Higginbotham’s books, but especially Death Is Stupid and Not My Idea: A Book About Whiteness. I’ve been her publisher and editor for years, and I think she’s a genius with direct books on difficult topics that make you laugh, cry, and change.

AR: So so many….The Fireboat Book by Maira Kalman, Lilly’s Purple Plastic Purse by Kevin Henkes, The Day I Swapped by Dad for Two Goldfish by Neil Gaiman, Thidwick the Big Hearted Moose by Dr. Seuss, Island of the Skog by Steven Kellogg, This is New York by Miroslav Šašek.

JB: Banshee by Rachel DeWoskin would be a perfect six-part series, I think. It opens with the narrator getting a diagnosis of breast cancer in early November and ends as she goes under for a mastectomy just before Thanksgiving. She manages to blow up her life in those three weeks, in ways that are hilarious and upsetting. And cathartic.

AR:  Zora Neale Hurston’s Barracoon: The Story of the Last Black Cargo but really because of the road trip she took with James Baldwin while writing it. Women & Power, which I have actually pitched as a sweeping documentary equivalent to the sweeping The Journey of Man.

Jennifer Baumgardner’s books include Look Both Ways and Abortion & Life. She is the director and producer of It Was Rape and I Had an Abortion, editor of the Women’s Review of Books, and publisher of Dottir Press.

Amy Richard’s books include Opting In and I Still Believe Anita Hill. She is a producer of Makers: Women Who Make America and Viceland’s Women; a founder of the Third Wave Foundation; and the president of Soapbox, Inc.

Together, they have written two books, toured to hundreds of campuses, and created Soapbox, Inc. and Feminist Camp. 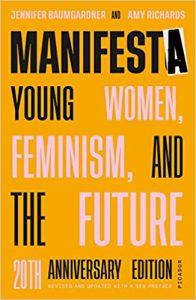 The 20th Anniversary Edition of Jennifer Baumgardner and Amy Richards’ Manifesta: Young Women, Feminism, and the Future is out now from Picador